Hopping Along the Beach 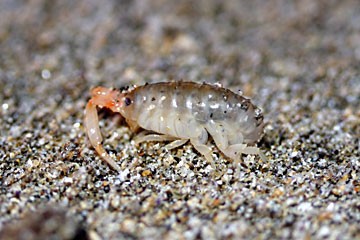 While strolling along the beach, as the waves wash over your toes, you've probably noticed little acrobatic critters performing back flips in the sand. These beach hoppers, sometimes called sand fleas, are actually amphipods. Amphipods are a type of crustacean, found in both marine and terrestrial habitats, which appear in a variety of different sizes and colors. Juvenile beach hoppers can be so tiny in fact, that expert taxonomists often find it difficult to distinguish between species. Two species of beach hoppers are common on the sandy beaches of the North Coast; the smaller Traskorchestia traskiana, and the larger Megalorchestia californiana. The larger species, sometimes called the California Beach Hopper, is a fascinating animal whose biology has been greatly investigated.

California Beach Hoppers are sexually dimorphic, meaning that the males and females look considerably different. Males can reach lengths of over one inch in size, while the smaller females are restricted to three quarters of an inch. The males also differ from females in that they have long, bright orange antennae. The females' antennae are proportionally smaller and lack pigment. It has been suggested that these long, bright antennae advertise a healthy male's fitness, attracting females in the same way a song bird displays its brightly colored plumage. Males also display their worthiness by jumping high into the air. The question is, are they trying to impress the female amphipods, or intimidate the other males?

To investigate this question, biologists Vikram Iyengara, of Villanova University in Pennsylvania, and Bianca Starks, of Paine College in Georgia, spent the past couple of years studying California Beach Hoppers. Due to the difficulty of studying beach hoppers in the wild, the biologists collected hoppers from the beach to be studied in a controlled laboratory setting. Iyengara and Starks conducted social experiments to investigate the mating system and reproductive strategies of the California Beach Hopper. They were able to differentiate whether mate selection arose from male competition or female choice. By manipulating amphipod group size and sex ratio, they determined the roles of males and females in what they call a harem polygyny. They found that California Beach Hopper males are extremely intolerant of each other, and competition leads to territorial fights over controlling access to a group of females inside a burrow. After gaining control of the burrow, the male uses its large antennae to anchor himself inside. Male competitors may only succeed at uprooting the existing male if they are larger in size.

While male competition is apparent, female choice also plays a role in this hopper's mating system. When females were allowed to interact with multiple males, they chose to cluster around the largest male amphipods. The chosen males are then allowed to mate with the females. Following mating, the females brood their eggs in an internal pouch and release fully active juveniles.

The biological and social system of the California Beach Hopper is enthralling. You may not have guessed it, but this small acrobatic clown has a lot in common with large mammals, such as the Steller Sea Lion. Both are sexually dimorphic and have a polygamous mating system, dominated primarily by male competition. Next time you're walking on the beach, pause and marvel at this fascinating amphipod that shares our coast.