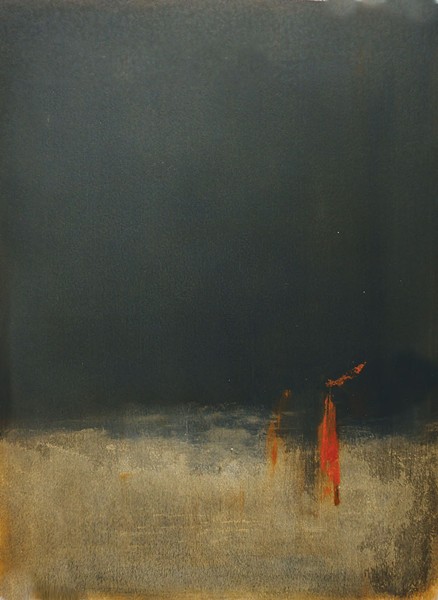 From the "horizon disturbed" series. Oil on paper. 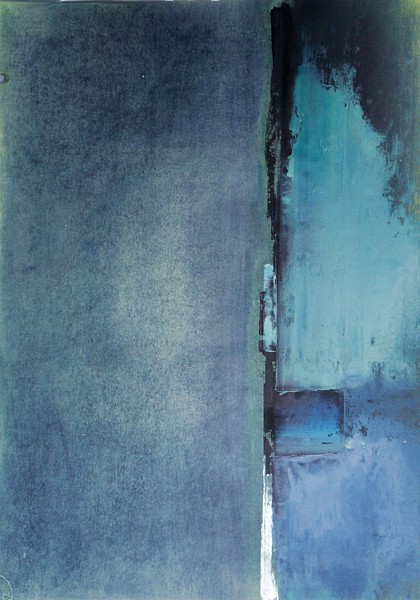 photo courtesy of the artist.

Doubt is a luxury," declares local French-born artist Marceau Verdiere. "Being able to doubt means you have the time to doubt; you have choices to ponder." These choices, and the time to consider their consequences, are actually a privilege, he says.

In many places people have no time to doubt. They have to figure out what they're going to eat that night or how to survive the next day. They might worry, yes, "but the existence of doubt means that you have the luxury of choice. If you have the time and possibility to do this it is something to be embraced."

The idea of doubt has been on Verdiere's mind a lot lately. Several years ago, he was asked to participate in the 18th annual "Chemin d'Art Sacre," where 12 artists exhibit their work in French cathedrals. "I get my own church," he says with a shrug and a chuckle. It's an amazing opportunity to link contemporary art with ancient spaces, but for Verdiere there's a hitch: He's an atheist. "I don't know what's going to happen after death," he says, "and I've chosen not to care about that moment."

So how do you reconcile a chance to be included in an international contemporary art event that just happens to fly against your core beliefs? Verdiere sees it as an opportunity for discussion rather than an occasion to dismiss Catholic faith. He was raised Catholic, but at 8 years old, a priest nearly ripped his ear off for painting heaven red and hell blue. The event thrust him into disbelief and ostracized him from his small-town community in France. This exhibition has allowed him to revisit and visually explore the ways in which doubt influenced the man he is today.

At his new studio in Freshwater, Verdiere speaks candidly about his autobiographical paintings that will fill Piante's gallery in November before heading to France next summer. Rain drums the corrugated metal roof, and we pause as he loads another log into the flickering woodstove, its glow illuminating his short-cropped grey hair and silver-rimmed glasses. Settling back into his chair, Verdiere explains how his abstract work strips away imagery to expose the visceral emotions that followed his precipitous loss of faith.

"Abstract painting, for me, is trying to reach for a perfect emotional feel," he says. He's divided his feelings of doubt into three distinct periods just after his loss of faith. The first series, "Aftershocks," portray a time where "everything is still trembling" — solid ground is lost, and he attempts to regain his footing. These three large paintings thrash with contrasts. In "Aftershocks #2," glossy layers of oil paint bleed through one another to reveal rusty oranges and aquamarine hues. Violent slashes of black create a horizon that gives way to thick crusts of turquoise, heavy greens and coarse textures. The assured, confident feel of these paintings is intentionally undermined by their conflicting surfaces, capturing a sense of loss and instability.

If the "Aftershocks" trio is a pebble thrown into a still pool, the "Horizons Disturbed" paintings are the ripples radiating out. Things have settled, the trauma is over, but something still lingers to deter peace. Verdiere's layers of color blend more evenly here. Matte planes reveal deep colors but are still punctuated with thick horizon lines and conflicting, juxtaposed strokes that jar the otherwise serene surfaces. The horizon line becomes a border, delineating the known from the unknown. For Verdiere, it represents a sense of wonder about what's on the other side of the pain while acknowledging that the answer may never be known.

Verdiere's third group of paintings is called "Afterthoughts." Faith has been shaken but accepted, yet doubt still creeps in. Two massive paintings and a dozen smaller works depict Verdiere's acceptance of the new norm through vast, unified fields of color. Yet little disturbances crop up: a splash of tangerine over steel blue, a black form slipped into an eggplant-toned field. These are "little moments, a little door that opens. Something where, even though it's a minute part of the whole painting, it's the one your eye goes to first."

These tiny moments of doubt help Verdiere put life into perspective. "I want to cherish them," he says, "I want to take away their negative connotations." Looking back, Verdiere sees them as instances that stand out from the hum-drum of daily life. By cherishing them he can remove the fear of consequences and "take advantage of the choices that are right in front of you." Though Verdiere admits, "I'm like everybody. I don't always get to that right away."

While the inspiration for this work arises from Verdiere's religious past, he hopes that viewers at the Piante show will approach the paintings in a meditative way, reflecting on their own moments of luxury; to see doubt as something to be cherished, and not something to be afraid of.

A reception will be held on Saturday, Nov. 1, during Eureka's Arts Alive from 6 to 9 p.m. Verdiere wants everyone to know that 20 percent of the artist's proceeds (after commission) will be donated to Miranda's Rescue.