Hot Sauce is the Right Sauce

Exploring local varieties one bottle at a time 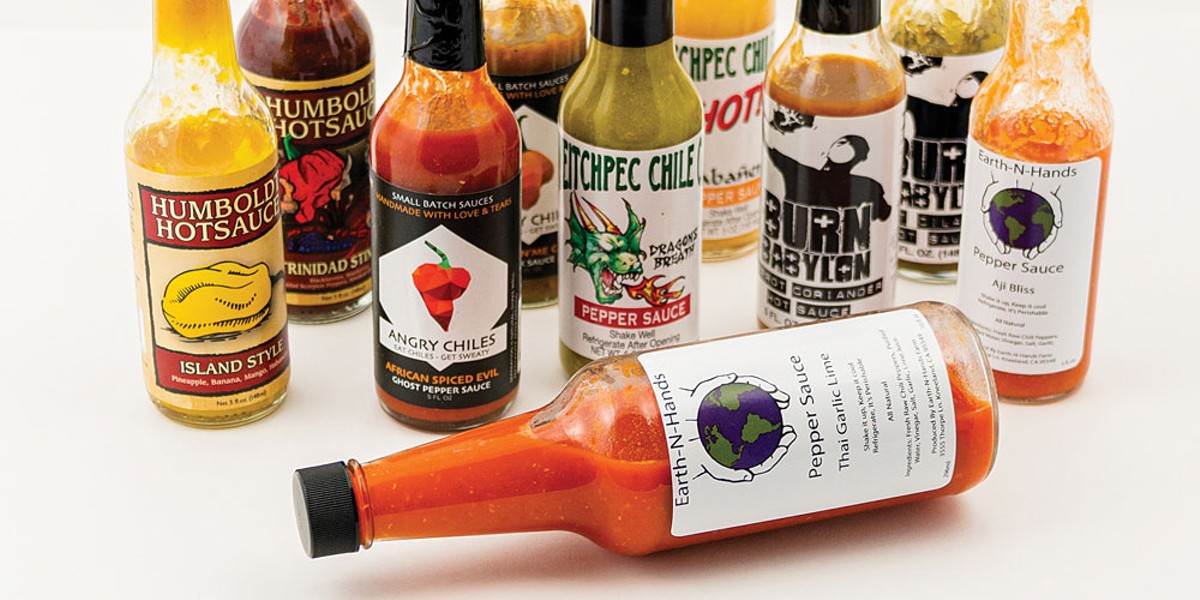 Why do we obsess over hot sauce? A few drops of liquid numbs our mouths, makes us sweat and gives us that kick in the stomach, burning inferno sensation we crawl back to every time. Most animals on the planet stay away from hot peppers, except for some birds and, of course, humans.

Spicy peppers contain a colorless and flavorless compound called capsaicin that brings the desired burn. This compound sends signals to our brain saying our mouth is on fire, which sends a flood of endorphins to drown the pain with pleasure like a fire hose putting out a burning building. Similar to a "runner's high" or opiates blocking pain receptors in the brain and leading to euphoria, an intense hot sauce can elevate your consciousness without having to train for a marathon or get hooked on narcotics. You can't lose.

I had the honor and privilege of putting my body and mind through the gauntlet of testing all the locally made and sold hot sauces Humboldt County has to offer. I haven't quite descended from my cloud yet and with 23 bottles I hope not to. Because you cannot discuss food without cultural and societal impact, I gathered friends and family to partake in the heated adventure that is hot sauce testing. If I'm going to be drowning in hot sauce, I want those closest to me to share the joy and sweet, sweet suffering.

I opted for fried cauliflower florets as our medium because 1) you don't always have to be so predictable and use wings, and 2) cauliflower doesn't have a strong flavor so you can really savor the complexities of each hot sauce.

Five hot sauce artisans — Earth N' Hands, Humboldt County Hot Sauce, Burn Babylon, Angry Chilies and Weitchpec — set a high standard in Humboldt County and beyond. They collectively use 13 types of pepper, ranging from bell to Trinidad scorpion to bird eye to the mother of all, Bhut jolokia, aka the ghost pepper, which is 400 times hotter than Tabasco and has a rating of more than 1 million Scoville Heat units. Here are the best burns.

Earth-N-Hands are for those of us who like a vinegary based hot sauce like Tabasco or Crystal, but with a much more complex flavor. Its Caribbean Fusion is like a shot of paradise in your mouth with a gentle kick at the end. If you love garlic as much as I do, then the Thai Garlic Lime will not disappoint. Perfectly balanced with lime, it would pair well with some ribs or a noodle and veggie dish. For a mild hot sauce, try the Aji Bliss, a fruity, tangy and citrusy concoction. If you want a nice burn without killing any flavor, then the Sting Scorpion/Ghost is where you'll get your temples burning and taste buds satisfied. Both of those would work well with red meat or wings. (Check out Andrea Juarez's great recipe using Earth-N-Hands' fresh peppers "Roasted Chiles," Oct. 22, 2015.)

Two of the most interesting and aberrant ingredients lists come from Humboldt Hotsauce and Burn Babylon. Humboldt Hotsauce's Island Style is a tropical explosion that can't be judged until you try it: full banana flavor with a kick of pineapple with habanero balancing the sweetness. I would suggest adding this to some street tacos and call it a night. Emerald Sauce tastes like the hot sauce equivalent of a fresh green smoothie that would pair nicely with pork. The company's hottest flavor is the Trinidad Stinger, a blast of blueberry and blackberry with the stinging sensation of dried ghost peppers. Try it with grilled veggies and tofu, or any meat. Watch out — you may see double.

Slightly hotter than habanero, the Scotch bonnet pepper is the main pepper for Burn Babylon. It gets crafty with flavors and I highly suggest exploring their complexities. The Carrot Coriander is a candied marmalade sauce sweetened with brown sugar. The Beet Cilantro stood out for me with its earthiness and fresh flavor. Beets and peppers go together like Charles Bukowski's Ham on Rye: tasty and a little self destructive. The Coconut Lime is a rich, creamy heat with lingering hotness. All these would go well with any chicken dish or pan-fried plantains and spiced beans.

The squawking ostrich on one of Weitchpec's labels is a mirror image of those who try the hot sauces. The Dragon's Breath lives up to its name and will cause numbing and sweat precipitation. The same goes for the Habanero — you will feel like that screaming ostrich but keep reaching for it long after your face goes numb. Weitchpec also has two milder flavors, Humboldt Green and the Klamath River Red. The former has a sweet bell pepper tang and the latter has the biting edge of Crystal, but with more body and sophistication. The hotter Dragon's Breath and Habanero I enjoyed with the fried cauliflower, but anything fried would go well with them. Same with the milder, actually. Everything goes with fried food.

If you are into Indian food (and if you're not, you should be) then Angry Chiles' Peach Habanero and Jamaican 'Me Crazy are perfect additions to your hot sauce collection or as a start to one. Perfect on some freshly baked naan or lamb, the Peach Habanero is similar to a sweet and spicy chutney with a medium kick. Although it has fermented yellow ghost peppers, the Jamaican 'Me Crazy still has a balanced sweetness that would go well with jack fruit or chicken tacos. The Chipotle & Cocoa — yes, you read that right — blends cocoa powder with smokey mesquite chipotle. Anything you throw on the barbecue would be enhanced with a splash of this.

The hands-down spiciest, body-on-fire, hurting to breathe, lightheaded, buzzing in the ears, Wu-Tang, killer-bees-on-the-swarm, stinging hot sauce of the sample group is the African Spiced Evil by Angry Chiles. With a name like that, it's no wonder I instantly found myself with unmanageable hiccups and tear-soaked cheeks. It was so good, though, I went in for seconds once I regained my sight. A blackout body high. Enough said.

I do not believe there are people who don't like hot sauce, only people who haven't found the right one. Humboldt County has an eclectic range for those who like everything from a robust fruity kick to sweet green bell and garlic to spice levels that cause something like an acid flashback. Somewhere in there is a hot sauce for everyone.

T.William Wallin is a senior at Humboldt State University majoring in journalism and minoring in Eastern religious studies. He is also a poet and freelance reporter and prefers he/him pronouns.