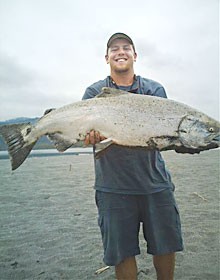 People packed the banks on both sides of the Klamath River two weeks ago, holding fishing poles on the crowded river’s edge. The lines, 40 to 75 people long, shuffled from time to time as others came out of shade tents with gill nets and brought them down to the shore, yelling for anyone in the way to move.

“Everyone was just making a killing at the mouth of the river,” said local sport fisherman Akash Patel. A senior recreation major at Humboldt State, Patel makes it out to fish the Klamath fishery every weekend of the season. “The salmon are pushing upstream later, but there are more of them and they are twice the average size of salmon last year. My friend caught a giant 40-pound King salmon last week at the Klamath.”

The Klamath River fishing that Patel described, while just beginning, is already more promising than last year. This year, Patel said, fishery regulations allow each fisher to keep two adult salmon per day. In recent seasons, he said the only sport fishing on the Klamath was catch-and-release only, due to low numbers of salmon.

Sara Borok, an associate fisheries biologist at the Arcata office for California Department of Fish and Game, specializes in the Klamath River fishery. “Over-harvesting of fish in the ocean over the last three years triggered a review of modeling methods and more stringent rules,” Borok said. “That’s why the guys in the river got hosed last year — the ocean guys received most of the harvest.” She said this year river fishermen have the bigger harvest quota, while the ocean harvest was more limited.

Borok said the run of salmon upriver is about two weeks behind schedule this year. She said high river water temperatures kept the cold-water-loving salmon in the ocean longer, and only as the river cooled did fish move inland. At the same time, she said, a slightly warmer ocean current along the North Coast increased the food supply for salmon and other fish. This improves the size and fat content, aspects that indicate a good year for the fishery despite warm water. She said the salmon will move upriver through mid-October, and the river is open all season for sport fishing. Borok said the northward change in the Pacific Coast salmon distribution reflects the warmer temperature phase of ocean climate cycles, but scientists are not sure what it would take to exceed the limits of the natural cycle and cause permanent change.

“There’s so many of us out there driving our gas-guzzling S.U.V.s, we’re making more dramatic spikes in the cycle,” she said.

That is where scientists like Eric Bjorkstedt play an important role. Bjorkstedt, a fisheries biology researcher for the National Oceanic and Atmospheric Administration at the Trinidad Marine Lab station and an adjunct professor in the same field at Humboldt State, works to translate fishery data into advice for management.

Bjorkstedt said he works on creating computer models to synthesize the data on ocean characteristics like temperature and salinity, providing a big picture of the fishery to help the experts understand what factors influence a population.

“Just recently people found there are long-term cycles in the ocean lasting 10-30 years,” he said. “This means the average productivity in California will change with the cycles. We are looking for how global warming impacts will manifest in this area, but we don’t know how things will happen,” Bjorkstedt said.

Fishermen like Patel express concern about the fishery’s long-term health, but count their blessings to be here for the strong salmon runs, even if it is just due to a warming cycle that won’t last. “It would make the next few years of fishing up here just outrageous,” Patel said.

Elizabeth Hilbig is a journalism student at Humboldt State.