Photo by Mike Kelly A school of small rainbow surfperch. 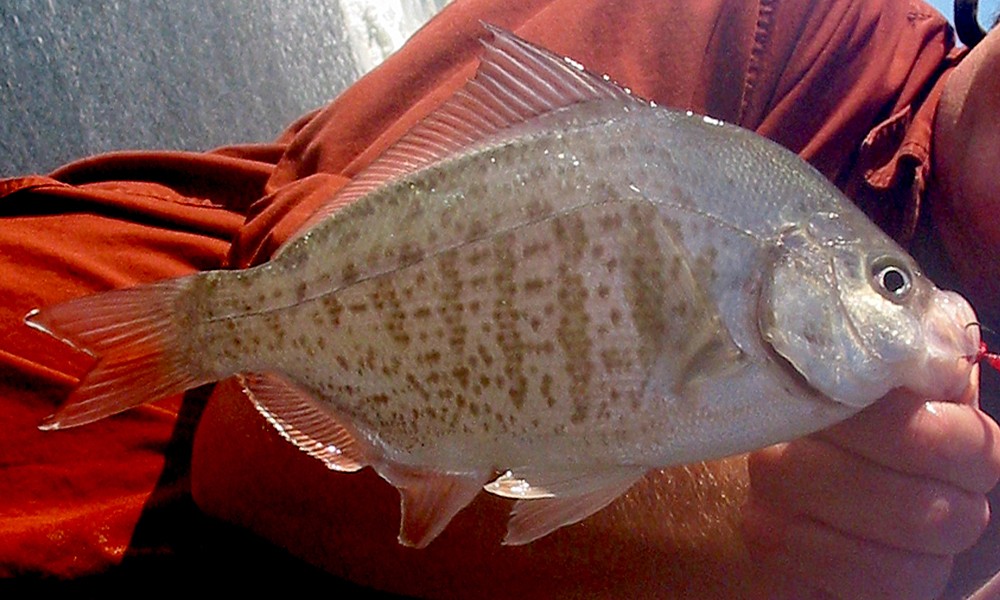 Photo by Mike Kelly A washed up shiner surfperch.

One day I found myself stuck in an elevator with a beautiful pregnant female. Just to make both of us less uncomfortable, I said, "Hey babe, I ain't into knocked-up chicks anyway, dig?"

She stared at me with her big glassy eyes and characteristically used her large pectoral fins for propulsion. For she was a redtail surfperch (Amphistichus rhodoterus).

I sometimes find surfperch of different species washed up on the beach. And I routinely encounter surfperch while snorkeling and sometimes fishing. However, seeing a redtail surfperch in an aquarium on wheels in an elevator was a first. But somehow it seemed normal.

In any event, California is a surfperch hotbed. We have at least 18 of the 23 known species, which includes the world's only known freshwater surfperch, the tule perch, which lives only in central California. My personal local favorites include the walleye, rainbow, striped, shiner and redtail surfperches. And my elevator companion was a big one — about as big as they get at maybe 16 inches and more than 4 pounds.

After a minute of pretending to ignore me, she said, "Well, gentlemen surfperch like already pregnant lady surfperch just fine. All surfperch species have a very uncommon reproductive mode. Each mature female mates with multiple males during fall and winter. My lucky number this year was seven. I could be carrying 100 babies from seven fathers."

"Think what you want, human. But your scientists have studied our mating habits and found reproductive advantages they had not previously considered and barely understand."

"How do you, um, consummate internal fertilization in surf with just fins?" I asked.

I asked if she was heading to the surf to give birth. She said, "Nope. We also seek calmer water for birthing. I'm headed to a river mouth estuary to meet my girlfriends and give birth together. I've invested a lot of energy in these babies. They may live 14 years and I want them to start life with lots of companions in a relatively safe environment."

"So, they can fend for themselves right away?" I asked.

She said, "Yes, they emerge almost fully mature and immediately start hunting things like small crustations and worms. As my babies grow, they will even eat small fish like herring and anchovies. But most species of surfperch don't typically eat fish."

I didn't mention the popular sport fishery and culinary desire for redtail surfperch flesh. I personally consider the meat to be overrated but, after being stuck for what felt like an eternity, I was starving. So, I filleted her.

Sure enough, she had dozens of perfectly formed live babies in her. I spared them and vowed to get them safely to the estuary — and to never again keep female redtail surfperch during summertime.

I awoke to find myself still stuck in an elevator. But I wasn't with baby surfperch. I was with a guy who I had apparently killed and partially eaten. The guy must have been loaded with tryptophan, which is probably why I nodded off.

Then the elevator door opened at the ground floor. I guess we were never actually stuck. It was just a very tall building.