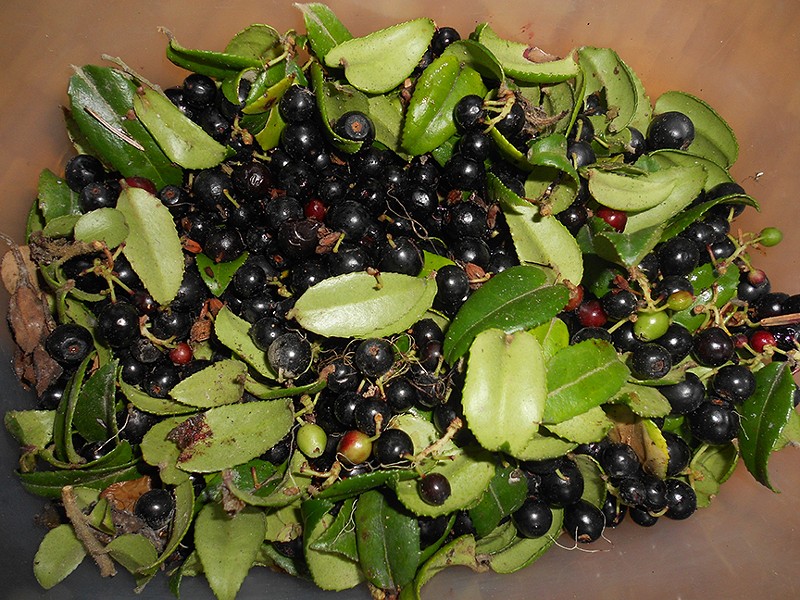 There is no shortage of huckleberry products out there: I have encountered huckleberry candy and huckleberry barbecue sauce, and last week I drank some huckleberry tea. They're all disappointing. Nothing matches the taste of an actual, freshly picked huckleberry. These tiny blue-black orbs take forever to ripen, but they have a unique tangy-sweet flavor that makes them perfect for pies and other pastries. Huckleberry season is a time of day-long expeditions into the brush, of secret spots on hillsides where there's just the right amount of sunshine to bring the fruit to fruition, of dodging poison oak and the occasional close encounter with a bear competing for our common prize. It's a time when whole families gather around the day's harvest — not to eat, but to begin the monotonous process of removing the tiny stems and leaves. Maybe it's the sheer hard work that goes into harvesting huckleberries that makes them so delicious.

Through centuries of pop culture, the word "huckleberry" has been synonymous with a certain type of American character: wild and unrefined yet undeniably charming. Think Huckleberry Finn or Huckleberry Hound. Huckleberries are hicks. But they're the kind of hicks you want to have as neighbors. And they are everywhere! Nothing seems to grow as prolifically as huckleberry brush. It's some of the first vegetation to show up after an area's been burned, and it specializes in growing on steep hillsides that force you to perform yoga poses when you pick.

Huckleberry brush is no treat to wade through, either. Its branches are stiff and wiry and stubborn — they both whip against your arms and tangle up your feet. Ticks are omnipresent. You return home scratched and sunburnt and with what is often a paltry prize for your efforts.

I was both intrigued and skeptical, therefore, when presented with a fancy "huckleberry harvester." The device is plastic and metal, with looped tines resembling a bear's claw, and a scoop underneath. While the idea of scooping up berries rather than pinching them one by one from the bush was exciting, I had little doubt that it would increase the amount of leaves and debris in the harvest. I took the harvester out to Manila, where bushes line the path between the gun range and the Ma-le'l Dunes area.

Coastal berries are larger and ripen earlier in the year, but they are also rather mealy and lack the inimitable tanginess of their inland cousins. For novice pickers, it should be noted that huckleberries in Humboldt often grow alongside twinberries, also known as bearberry honeysuckle. Huckleberries have deep green, waxy leaves while twinberries' leaves are lighter, resembling those of a raspberry. Huckleberries are delicious. Twinberries are poisonous. If you're not sure — don't pick it!

To my great surprise, the harvester was a success! The claw slid neatly along the branches of the bush and popped the berries off one by one, leaving most of the leaves. Within in an hour I had come close to filling my little plastic container. Granted, the harvester didn't distinguish from the ripe, the almost ripe and the green, and there were still plenty of leaves and pine needles in my bounty, but I was impressed! I took the huckleberries back to my friends' house where (after rinsing them) I proudly offered them up for dessert. They were a little dismayed at having to pick out the leaves themselves, but what do you want? This hick has better things to do.

My mother's famous huckleberry-apple pie once earned $75 at an auction. It was worth every dollar. I risk temporary estrangement sharing her recipe, even though she's confident that nobody can replicate her results. King or Golden Delicious Apples are a good place to start, and be sure to let the syrup soak into the apples before you cook the pie. And I've just lost out on Christmas presents for the next five years.

Prepare pastry for a double crust pie and place the bottom crust in a pie pan.

Mix the fruit, sugar and tapioca in a bowl. Pour the filling into the unbaked piecrust, dot it with butter and cover it with the top crust. Bake the pie at about 375 F (Mom uses a wood stove) until the juice starts bubbling through the holes of the upper crust, about 20 minutes.