A dark horse and a classic blunder 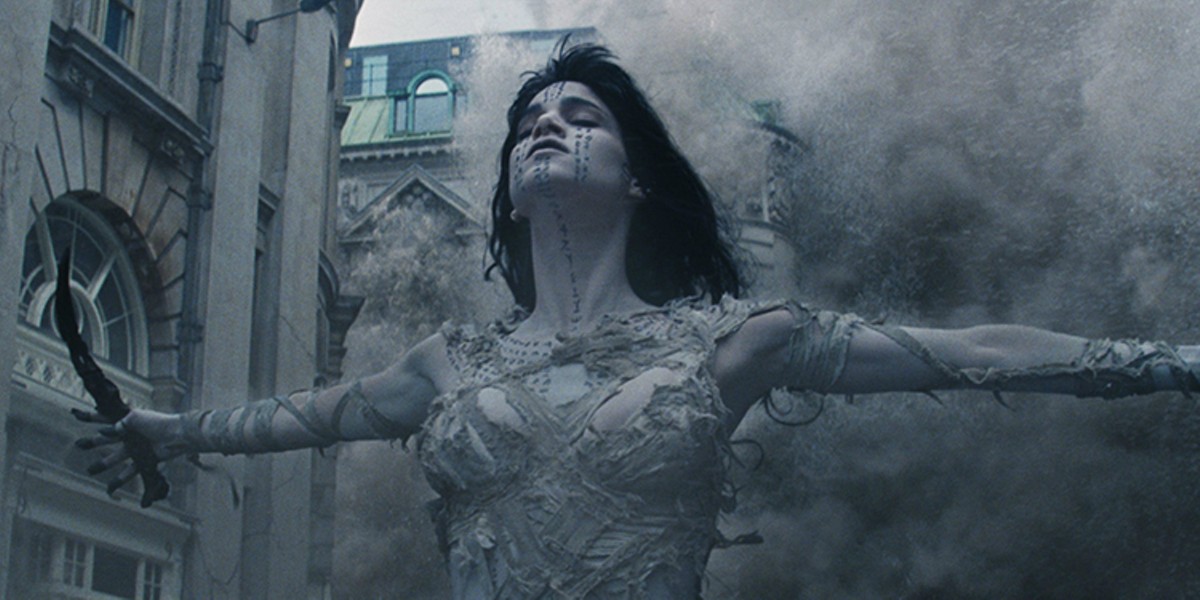 The Mummy When my song comes on.

It Comes at Night Signs your Nextdoor group has gotten out of hand.

IT COMES AT NIGHT. As the recent tidal wave of smaller, independent horror movies seems to have receded a bit, we have the opportunity to consider their merits and shortcomings. As I've remarked (probably too many times) before, there were within that group a few very pleasant surprises. As with anything of value, though, there were dramatically outnumbered by cheap slasher pics and exploitative pseudo-shockers. Whether or not our greater cultural taste as improved and whether the "market" has (or will) self-adjust remains to be seen. But we find ourselves now in a period of relative calm and it feels like an entirely appropriate moment for a movie like It Comes At Night. If pressed, I suppose one would have to call it "horror" but even if it hits some of the marks — with great precision — it seems unfair to so limit it. Maybe because it calls back to some of the slower, headier forbearers of the genre more than the graphic, pandering recent school, it feels like more than just a horror movie. It deals in horrific things, to be sure, but in a more measured, contemplative, artful way.

As an indeterminate plague sweeps the cities (of the country? the world?), one family subsists in a crazy, rambling old house on a remote, densely forested property. As the movie opens, we observe grandfather Bud (David Pendleton) succumbing to the mystery illness. His daughter Sarah (Carmen Ejogo) watches, bereft, gloved and gas-masked, until her husband, Paul (Joel Edgerton), and their son Travis (Kelvin Harrison Jr.) expedite the end of life and dispose of the body. Such is the new normal.

Life goes on in a numbed, precarious way. Travis alternates between insomnia and cataclysmic nightmares, finding some solace in the companionship of his grandfather's dog Stanley. Paul busies himself with the routine of survival. Sarah inures herself to the constant shocks and pain of their new lifestyle.

One night, the family awakens to the noise of an intruder. After subduing him, Paul ties the man, Will (Christopher Abbott), to a tree, waiting to see if he will manifest symptoms of the dreaded disease. When he does not, Paul interrogates him and, satisfied by his answers, aids Will in bringing his wife Kim (Riley Keough) and young son Andrew (Griffin Robert Faulkner) to live with his family. After an early easy period, Paul's vigilance/paranoia permeates the situation, which proves to be ultimately untenable.

Had I been asked, on leaving the theater, what I thought of It Comes At Night, I likely would have responded with mild approbation; damning it with faint praise. The aesthetic is strong, the camera moves deliberate and measured, the music atmospheric but never intrusive. Days later, though, the movie has continued to grow in my mind. There are images (not terribly shocking ones) that linger in the memory, made all the more indelible by the air of dread and unknowing that so permeates them.

Writer/director Trey Edward Shults (Krisha, 2015) plays it smart here, keeping his story small, focusing his energy on tone and mood, and imbuing every scene (every shot, really) with that mood. This results in a contemplative, cohesive work that defies genre even as it plays to it. To a degree this is a horror movie, sure. But it is also dystopian futurist, a wilderness family drama and a coming-of-age story. Ultimately, it is a distinct and significant work of art — a precise, compact, well-considered story told with great restraint and style. It may not be my favorite new movie and its atmosphere of claustrophobia and distrust will likely be too off-putting for some, but it succeeds where many have failed. R. 97m. BROADWAY, MILL CREEK.

THE MUMMY. I find myself guardedly optimistic about Universal's self-reinvention as a monster house with its Dark Universe imprint. Even though the constant reaching back that has come to define Hollywood speaks to a lack of invention, I'm a sucker for classic monster movies. The sticking point here, of course, is that word "classic." These are movies from 70-plus years ago and, for the most part, not exactly fresh in our minds. But the iconography, the design and the characters are very much a part of our cinematic consciousness. So by all means, Universal, bring back the classics but give us new classics to replace or stand beside them. The Mummy, for all its fun and minor stylistic successes, makes me think that is not what we are going to get.

Through a series of perhaps too-convenient coincidences, opportunistic Nick Morton (Tom Cruise) and his sidekick Chris Vail (Jake Johnson) — who are apparently active-duty Army on long range recon patrol, but who have the leeway and autonomy to spend all of their time gallivanting around the Middle East, stealing antiquities — find themselves aligned with Jenny Halsey (Annabelle Wallis), some kind of archaeologist (?) searching for the tomb of an ancient Egyptian princess. Said princess, Ahmanet (Sofia Boutella), made a pact with the god of death some years back, angling to secure ultimate and everlasting power. She got caught before she could seal the deal, though, and was imprisoned in the above-mentioned tomb. But Nick and Chris, being bumbling and hubristic, let her out; the race to get her back in the box is on.

The Mummy differentiates itself from some of the more forgettable monster shows of recent years by calling back the classics stylistically and infusing the story with some much-needed humor. But it still suffers from over-slickness and under-writing, despite or because of the presence of seven (!) credited screenwriters. Tom Cruise does his movie star thing, Jake Johnson provides some perhaps too obvious comic relief, despite his best efforts; Boutella doesn't have much to work with. Russell Crowe appears as Dr. Henry Jekyll and briefly as the other guy as well. PG13. 110m. BROADWAY, FORTUNA, MILL CREEK.

47 METERS DOWN. Not to victim blame but if you choose to go into a shark cage with your sister (Mandy Moore, Claire Holt) on vacation in Mexico and you don't turn back when the guy running it turns out to be Matthew Modine, that's on you. PG13. 89m. BROADWAY, MILL CREEK.

CARS 3. Lightning McQueen (Owen Wilson) goes up against younger, faster cars in the race for the Piston Cup in this Pixar sequel. With Larry the Cable Guy and Cristela Alonzo. G. 109m. BROADWAY, FORTUNA, MILL CREEK.

I, DANIEL BLAKE. An out-of-work carpenter recovering from a heart attack meets a struggling young mother who's also falling through the cracks and decides to fight the system. R. 100m. MINOR.

ALIEN: COVENANT. Ridley Scott's post-Prometheus, pre-Alien installment of the sci-fi/horror/action franchise he started lands colonists on a planet infested with deadly parasitic creatures. Michael Fassbender excels as a pair (!) of androids and Katherine Waterston hoists the big guns as the human heroine as Scott ticks off everything on the fan wish list. R. 89m. BROADWAY.

CITIZEN JANE. Documentary about Jane Jacobs, a writer and activist who fought for New York historical landmarks is the face of the 1960s wave of development. NR. 92m. MINIPLEX.

DAVID LYNCH: THE ART OF LIFE. Just in time for your Twin Peaks binge: a documentary about the life and aesthetics of the director. NR. 88m. MINIPLEX.

GUARDIANS OF THE GALAXY VOL. 2. This buoyant, funny follow-up to Marvel's trip to space with a motley crew of outlaws and misfits is surprisingly heartfelt — like a love-letter from writer-director James Gunn to the material and its fans. PG13. 136m. BROADWAY.

THE LOVERS. Debra Winger and Tracy Letts star as a cheating, disconnected married couple who fall back in love and throw their respective affairs into chaos. R. 97m. MINIPLEX.

MEAGAN LEAVEY. True story of a marine and the combat dog she trained and served with in Iraq. I'm not crying, you're crying. Starring Kate Mara. PG13. 116m. BROADWAY.

PIRATES OF THE CARIBBEAN: DEAD MEN TELL NO TALES. Johnny Depp returns to the waterlogged franchise with an excellent Javier Bardem as Captain Salazar, the cursed captain of the month and the only saving grace of the movie. PG13. 129m. BROADWAY, FORTUNA, MILL CREEK.