Is the North Coast in sync with the nation's subprime mortgage crisis? 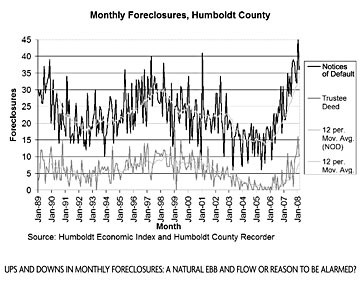 According to public documents obtained from the Humboldt County Recorder's Office, Merezko — chosen at random from a list of over 80 individuals who have lost their homes for nonpayment sinceJan. 1, 2007 — bought his home in a nice neighborhood in Eureka for around $180,000 in October 2004. Shortly thereafter, he took out two loans with Southern California-based Long Beach Mortgage Company.

Merezko took out two adjustable-rate rider loans, one for $136,000 and another for $34,000, which meant he didn't have to put any money down on the house.

According to realtor Dean Kessler, co-owner of Eureka's RMK Realty Services, it was a golden time for homebuyers with little or no credit: "Basically you just had to fog a mirror and you could get a loan," he said from his office last week.

A little over a year passed before Merezko decided to refinance, again with Long Beach, and this time for $238,500. On Oct. 17, 2007, three years almost to the day after he purchased his home, Merezko received a notice of default, the first step in the foreclosure process. He was behind in mortgage payments to the tune of $11,429.74. Finally, in February of this year, his house sold for far below market value in what Kessler described as an "extreme short sale." A group of local investors picked up the property for $113,000.

Merezko was perhaps unaware when he took out a loan with Long Beach Mortgage Company that the United States government had sued them in federal court in central California for discriminatory loan practices in the early 1990s, citing the company's "practice of illegal discrimination by basing the price of loans, at least in part, on an applicant's race, national origin, sex and/or age." The government claimed that Long Beach had violated the Fair Housing Act by intentionally targeting their lending activities toward the subprime market — a term that wasn't on most people's radar then.

The story of how Raul Merezko lost his house is not new news. Subprime mortgage woes are all too familiar in today's slouching economy. Still, some contend that Humboldt County has weathered the national housing slump better than other parts of California. Humboldt State University economics professor Erick Eschker disagrees.

"Anybody who says that there's a Redwood Curtain, that we're special, that we're immune — they're lying," he said last week from his office. Eschker runs the Humboldt Economic Index, a website that compiles economic data for the county.

Dr. Jon Haveman, a Southern California-based economist and co-founder of Beacon Economics, a research and consulting firm, is less certain. At a recent housing summit held in Eureka, Haveman told the audience that Humboldt has fared relatively well in the subprime mortgage crisis.

"There is more hope for Humboldt County than for other areas," he explained in an e-mail on Monday. "First, foreclosure activity in the county is at about the slowest pace of any county in the state. Second, there seems to be an interesting demographic dynamic ... rapid growth among 25-34 year olds."

"This is good for two reasons," Havemen continued. "First, they are likely first-time homebuyers and will shore up demand to some extent. Second, building on the first, this may represent movement of individuals from more expensive regions, say the Bay Area. To the extent that they are moving because of lower general home prices, this will be a plus."

In his March presentation, Haveman also noted that subprime mortgages were less commonplace in Humboldt County then they were statewide. Twenty-seven percent of Humboldt's mortgages were subprime or "Alt-A", according to his statistics, compared to 40 percent for the state. And the county's fourth quarter foreclosure rate (0.4 percent) for 2007 was low compared to harder-hit areas like Merced and San Joaquin counties (6.8 percent and 4.9 percent, respectively).

Kessler tends to agree. "We are not seeing near the severity of foreclosures they are seeing in other communities," he said. Kessler attributes this in part to more responsible lending by Humboldt's mortgage brokers. "We had some pretty responsible lenders," he said. "They didn't just put them [homebuyers] into any old loan. Yet there are some folks who decided to buy the wrong kinds of assets and now they find that they are upside-down in a property."

Upside-down like Merezko was — he owed more on his house than the property was worth.

Kessler added that brokers he's in touch with from other parts of California tell him that short sales - those that, as in Merezko's case, involve a foreclosure — constitute upwards of 60 percent of total home sales. In Humboldt that number is more like 25 percent, according to Kessler's rough, over-the-phone calculations.

Still, Eschker is predicting a continued decline in housing prices — similar to trends we're seeing across the state — and no letting up on the number of new foreclosures.

In March of last year, Eschker presented a "County Outlook" for 2008 to the Eureka Rotary Club. In that presentation, he compared housing prices in various California cities (Redding, Sacramento, San Francisco, San Jose, Santa Rosa, Los Angeles and San Diego) to Humboldt County between 2002 and 2008. As the major cities experienced housing price increases and decreases, so did Humboldt. Eschker says that's compelling enough data to conclude that there's no Redwood Curtain protecting us from the subprime crisis.

"The way that prices were rising in L.A. and Sacramento," he said, "we have the same pattern here, and so the question is what's going to happen with Humboldt County? Well everybody who's making price predictions for those areas is predicting further price declines. ... We shared the same upswing with them and it looks like we've entered the same downswing [as well]."

But Dan Johnson, president of Danco Builders, thinks the lull in the housing market isn't a direct result of the national subprime mortgage crisis. Reached on his cell phone Monday, Johnson, whose company also has offices in Bakersfield, said that prices for Danco's houses locally have dropped by only about five percent, whereas in Southern California they've plummeted nearly 100 percent — mostly because builders "flooded the [Southern California] market" with product. That didn't happen on the North Coast.

The real problem, according to Johnson, is the lack of jobs in the county. The market for first-time homebuyers is nonexistent, he said, but houses in the $450,000-$600,000 range are selling.

Sitting in the sunlight-filled County Recorder's Office last Thursday slogging through foreclosure data, Kristine Legg, a sprightly county documents examiner, said that she, too, had noticed a sharp increase in the number of notices of default over the past couple of months: 131 between January and April 2008, to be precise. That's up from 77 over the same period last year.

Granted, not every notice of default results in a completed foreclosure, but the data that Eschker has gathered indicates that notices of default tend to peak slightly before trustee's deeds (the final document in the foreclosure process) do. That means that in light of the 19-year high in notices of default the county is experiencing now, Eschker predicts that trustee's deeds will soon surpass their late-'90s peak.

Proof positive, he says, that no matter how geographically distant Humboldt County is from Wall Street, or how tall the great Sequoia sempervirens are that separate the region from sprawling over-built communities farther south, economically speaking, homeowners from G Street in Arcata to Main Street in Fortuna are certain to keep feeling the crunch.