How They Got Here: Round the Horn 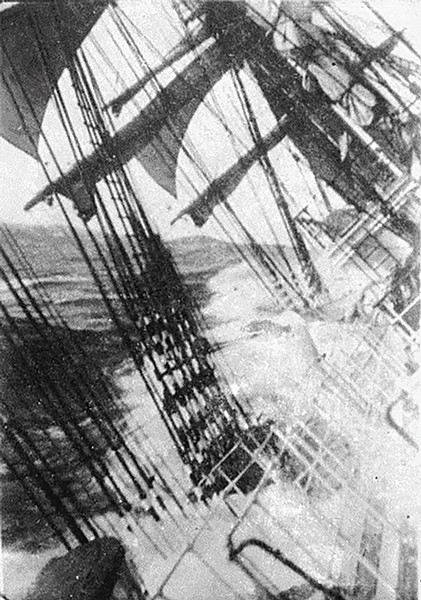 National Library of Australia, public domain Despite its uncertain provenance (it's dated "between 1885 and 1954"), this grainy photo by an unknown photographer says more about sailing round the Horn than any words.

Last time, we looked at how about one-third of the estimated 300,000 "forty-niner" gold-seekers arrived in California via the Isthmus of Panama ("How They Got Here: Panama," May 20). This time, we'll look at the history of the other main sea route from the east (the U.S. East Coast and Europe): the stormy passage around Cape Horn, the tip of South America.

Before 1520, world maps and globes created since Columbus' 1492 Atlantic crossing showed South America as contiguous with a presumed southern continent, that is, there was no way of sailing from the Atlantic to the Pacific. Although Antarctica wasn't sighted until 1820, it was long presumed there must be a continent in the vicinity of the South Pole to balance out, as it were, the land masses north of the equator.

After being rejected by his own king, Portuguese navigator Ferdinand Magellan (1480-1521) persuaded the 18-year-old King of Spain Charles V to fund an expedition to reach the "Spice Islands" from the west. Spices, particularly cloves and nutmegs, were literally worth their weight in gold back then, both for adding to food and for supposed medicinal properties. They were found in abundance on the Moluccas, half a dozen islands in present-day Indonesia. Since Portugal controlled the passage around the Cape of Good Hope, Magellan was looking for a backdoor Spanish route from the Atlantic, bucking the belief that no such route existed.

The story of how he found what is now known as the Magellan Strait is the stuff of legend. After putting down a mutiny, followed by punishment of the mutineers, the loss of one of his five ships in a storm and losing his main supply ship when its crew took it over and returned to Spain, Magellan then faced an unknown passage to the Pacific. Finding the entrance to the strait after several false starts, Magellan spent 38 grueling days traversing the 350-mile-long route, battling rocks, storms and fierce "williwaw" winds that daily threatened his remaining three vessels.

Eventually, just one of Magellan's original five ships, the 85-ton Victoria, completed the around-the-world voyage, carrying just 18 of the original crew of 270 who had set out three years earlier. While some had deserted, some were imprisoned and some — including Magellan himself — died battling Pacific Islanders (not to mention execution or abandonment as punishment for mutiny), most fell victim to scurvy and starvation.

For decades after the return of Victoria, mapmakers believed that the Magellan Strait was the only sea route between the Atlantic and Pacific oceans. This is borne out, for instance, by the first comprehensive map of the Pacific Ocean, Maris Pacifica, from 1589. It wasn't until the early 1600s that European navigators finally discovered Drake Passage, a 500-mile-wide open seaway between Cape Horn — the tip of South America — and Antarctica. (Francis Drake, the English hero-pirate, probably didn't reach Cape Horn or the passage named after him during his 1577-1580 circumnavigation.) Drake Passage gave sailors plenty of maneuvering room, as opposed to the more sheltered but unpredictable Magellan Strait. How unpredictable? Very. Today, freight vessels have to take on pilots to pass through the strait, which is just 1.2 miles wide at its narrowest.

By the time of the California gold rush, clipper ships carrying as many as 500 passengers were regularly "rounding the Horn" from the Atlantic to the Pacific and back. Although this route was 8,000 miles longer than via Panama, it was favored by tens of thousands of forty-niners, despite its fearsome reputation. In the 50 years between 1850 and 1900, more than 100 ships were lost attempting the passage between the oceans, with the loss of some 10,000 lives.

Barry Evans (he/him, barryevans9@yahoo) has a particularly soft spot for Nova Scotian Joshua Slocum, the first person to sail single-handed through the Magellan Strait, on his 1895-1898 voyage around the world.