How to Win $1 Million 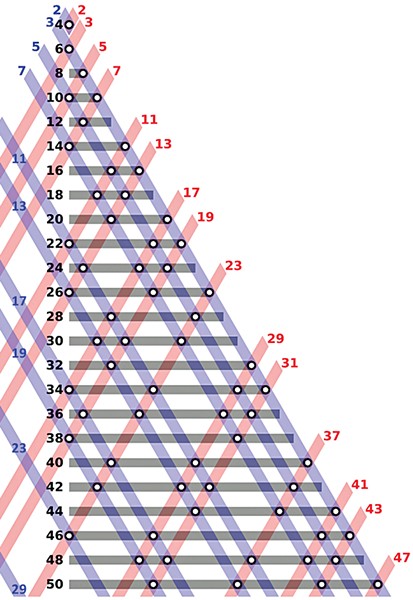 Image by Adam Cunningham and John Ringland, via Creative Commons Even integers from 4 to 50 as the sums of two primes. Goldbach's Conjecture posits that every even integer greater than 2 can be expressed as the sum of two primes in at least one way.

The question of whether 1 is a prime number has bedeviled mathematicians and philosophers for over 2,000 years. Euclid, the ancient Greek “father of geometry,” didn’t even consider 1 to be a number, let alone a prime. Later, writers claimed that the sequence of primes began with 2 or even 3, rarely 1. Only in 1585, with the work of Flemish mathematician Simon Stevin, was 1 finally considered to be a number. Today, the reason given for 1 not being prime is usually attributed to the “fundamental theorem of arithmetic,” which can be stated as: Every composite number can be written as the unique product of primes. For instance, 12 is uniquely 2 x 2 x 3. If 1 were prime, this uniqueness would be lost: 12 = 1 x 2 x 2 x 3 = 1 x 1 x 2 x 2 x 3, = 1 x 1 x 1 x 2 x 2 x 3, etc. In the end, it’s a matter of convenience. It just works for 1 to not be prime and for 2 to be the smallest prime.

It's simple. Prove the Goldbach Conjecture: Every even integer greater than two is the sum of two primes.

Shouldn't be too hard, right? Figure it out and you'll win a cool mil from the Clay Mathematics Institute, and you'll probably get a Fields Medal — the math equivalent of the Nobel Prize as long as you're under 40 — in the bargain. Here's a little background to get you started.

In 1742, 35-year-old Swiss mathematician Leonhard Euler was having a correspondence regarding prime numbers with Christian Goldbach, a mathematician 17 years his senior from Königsberg in present-day Russia. After several exchanges, Euler summed up Goldbach's ideas in what is now known as the Goldbach Conjecture, noting, "I hold this to be a completely certain result ... aside from the fact that I can't prove it myself." Today, despite the lure of the $1 million prize, you can be pretty sure that if Euler (perhaps the greatest mathematician of all time) couldn't do it, you might have a spot of trouble proving it. Indeed, the conjecture has stood the test of time and remains unproven today. Which is weird, seeing as it's so simple to state in just 12 words, as above.

Feeling ambitious? Find the 28 ways to express 1,000 as the sum of two primes.

Barry Evans (barryevans9@yahoo.com) wonders if he'd still get the million if he disproved the conjecture. He prefers he/him pronouns.