How We Let This Happen 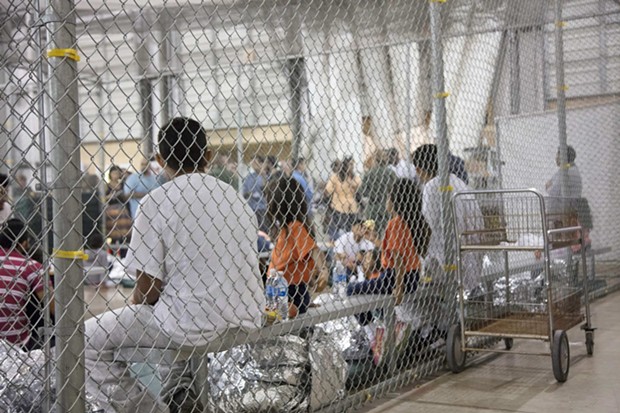 They want to debate terminology because what happens when we start to call them concentration camps instead of "holding facilities?" We all become culpable for our country's policies and laws that would torture and kill children while we debate semantics. And 150 years from now students will sit in a classroom and wonder, "How could they? Why didn't everyone stop it?"

When I teach classes on California Indians and the gold rush, when we start talking about the laws and policies made by the state of California and the federal government legalizing the mass killing and enslavement of Native people, and when I finally point out that in Humboldt County most enslaved Native peoples were children ages 7-12, there is always one question students ask me: "How could everyone have let this happen?"

I mention the work of Brendan Lindsay who in 2012 wrote Murder State: California's Native American Genocide 1846-1873, in which he argued it wasn't just the laws and policies of the government that supported genocide, it was the "tacit acceptance" of these laws, policies, massacres, enslavement, imprisonment and removals by "everyday citizens" who allowed it to happen. One-hundred-and-fifty years later, we are trying to figure out why "those people" would sit by while others massacred villages and took and enslaved women and children. We want to think it was a "different time" or that if it happened now, we would stop it. We wouldn't debate whether Indigenous people are actually people (a common debate throughout history). We would be the people who knew right from wrong.

Yet here we are, debating the use of the term "concentration camp" and whether or not these children and parents deserve this treatment because they are supposedly "breaking the law." Many of these migrants are Indigenous peoples from other countries legally seeking asylum, fleeing horrific situations, willing to endure whatever it takes to secure a better life for their families. They are human beings locked in cages because on some piece of paper somewhere, someone said it was "legal" to do so.

During the gold rush, the state of California passed the Act for the Government and Protection of Indians, which made it illegal to be an Indian standing around. If you were caught standing around they could arrest you. And when you appeared before the justice of the peace, he would say, "You have to pay this much as your fine." But you couldn't pay it, so the judge would ask, "Can anyone pay this Indian's fine? If you do, they have to come and work for you." The act also made it legal to take any child you found "without parents" into "apprenticeship" so settlers started killing Indian parents and taking their children. There are letters from soldiers talking about how they would meet people with numerous Indian children in their wagons. When the soldiers asked how they got these children, they would answer, "I killed their parents." It was legal. It was the law. And people could tell themselves, "Look, if Indians don't want to be enslaved, they need to follow the law. If they break the law, they have to deal with consequences like enslavement, removal, imprisonment and torture of children. That's the law."

In my lectures, people tell me that we wouldn't do that now. We would know that the law was unjust. "Now that we know better," or "now that it's a different time," we would be the ones who stepped forward and fought for those who needed us most. Because it was legal in 1850 to hunt Indians, to arrest Indians for standing around, to sell them into slavery, to kill Indian parents and take their children into slavery. And yes, the semantics of the word "apprenticeship" became so important to them. To this day there are historians who debate the semantics of "slavery" in California.

And the semantics of genocide.

Last week Gov. Gavin Newsom apologized for genocide when he met with a group of California Indian leaders in Sacramento. He said it was "genocide" that was committed upon California Indian people. It was an apology by the head of a state that was founded on "extermination" of Native people.

Historians have filled books debating whether genocide should be applied to the United States' treatment of Native Americans. California Indian people have long argued "genocide" is not only an applicable but important term. Forty years ago, Jack Norton published Genocide in Northwest California: When Our Worlds Cried. Norton, a Hupa/Cherokee historian, named what happened in California genocide. His work has become essential because he used the colonizer's archive of so-called civilization, prosperity and manifest destiny to highlight a depraved, backward, horrific and calculated genocide that founded and shaped what is now called California. Norton notes in his introduction that he was met with "derision" upon publication. He writes, "I was surprised by the reactions of some people when it was initially published. They often told me that they thought I was particularly angry and therefore biased. I usually answered, that yes, I was biased, as all historians are biased, and I was certainly not angry." He also notes, "Some public schools districts would not allow the book in their libraries."

Many years later, a number of texts have followed in Norton's footsteps, adding to the evidence of a government-supported genocide against California Indians resulting in the loss of land and the death of close to 90 percent of the population.

Our histories as Indigenous peoples in California are a part of us. Not enough people know about the genocide in California. There are no public memorials to the people killed, enslaved, removed and discarded. We don't call missions or forts "concentration camps," and when kids visit these places on their class trips, they learn about the great history of California but not about the Native people tied together, on their knees in the mud, told to stay there for hours. We don't learn about how Native people slept in cages, locked "dormitories" where there was no bathroom and no access to basic hygiene.

At the time, California Indians were told they could be enslaved because they were "breaking the law." They were told that had they just "obeyed the law," they wouldn't be in this situation. California Indians were fighting for their lives in courts that had no desire to help them; they were relying on a public to demand changes for them. Our kids were being taken to teach us a lesson, to show us we had no power, to remind us who was really in charge. Everyone watched as they did it.

There are children in concentration camps in the United States right now.

And our governor finally, after 150 years, apologized for the attempted genocide of California Indians.

Who is going to apologize for us 150 years from now?

Cutcha Risling Baldy is the department chair of Native American studies at Humboldt State University. Her book We Are Dancing for You: Native feminisms and the revitalization of women's coming-of-age ceremonies is available at major booksellers.