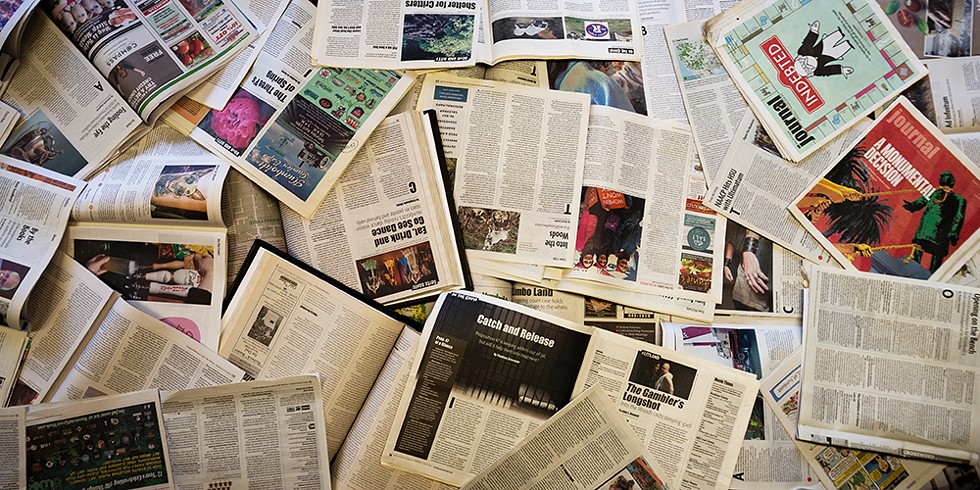 What is the news and who are we to decide?

Those are fair questions and, if you're reading them, thanks for taking somewhat of a leap of faith in thinking we might deliver the former while trusting us on the latter. But if you still find yourself wondering about the answers, you're not alone. As the Journal's news editor, those two questions are at the heart of many of the inquiries I get peppered with when out and about in the community. People want to know how — with all that's going on in Humboldt County and the world — we find the stories we report, and how we go about reporting them.

First off, what's news? As the term itself intones, it's new information — whether that be something that's happening right now (a protest or building project, for example), something that just happened (a crime spree or a city council vote) or something new we've learned about something already of note (say, that the murder suspect picked up last week has an extensive criminal history). But the newness of news is only one of a handful of criteria we use to determine whether something has value to our readers.

Here are some others:

Proximity — The same event could unfold in Arcata and Austin, Texas, and we are a million times more likely to cover the one in Arcata, unless of course someone from Humboldt County is involved in whatever's going on down in Texas.

Conflict — We live in a world of passionate people doing things they care deeply about and where those passions collide often makes the news. Think about court cases, crime, city planning decisions, neighborhood disputes, nonprofit shakeups and that "Cat Food" painting on the Eureka utility box. Conflict often drives reporting.

Human interest — As a species, we are incredibly interested in one another. This means that reporting that fleshes out who a person is, their internal conflicts (there's that word again) and what drives them to do what they do is inherently interesting.

Usefulness — What can the reader do with the information we are giving them? Sometimes, this is pretty straightforward (like when we report that U.S. Highway 101 is closed, we do it so motorists can save themselves some time and headache and find an alternate route). Other times, a story serves to give readers a better understanding of a complex problem or to update them on a political process, so they can get involved if they choose to.

Novelty — The old journalism aphorism goes that "Dog Bites Man" isn't a news story — it happens every day — but "Man Bites Dog," now that's a headline. That oversimplifies it but newspapers are always looking for the novel, the groundbreaker or the outlier.

Impact — At the Journal, we probably view this as the most important criteria when calculating whether a story is worth our time. Is this reporting going to change our readers' lives? Is it going to change their actions — on a simple level, prompting them to take that alternate route or, on a deeper level, causing them to re-evaluate consumption or voting habits? We want our reporting to change the way people understand and interact with the communities around them, which is why we strive to make sure our reporting tells you not just what happened, but why, what it means and what is likely to happen next.

So how, with that general criteria in mind, do we turn life on the North Coast into reported news? Because we publish 52 editions of the Journal a year, we essentially live in a weekly cycle that begins anew after the paper ships off to Western Web's printing press in Samoa on Tuesday night.

The new week begins with an editorial staff meeting every Wednesday, which we kick off by reviewing the issue that just hit newsstands that week. We talk about what stories worked and why, and which fell short of what we'd hoped they'd be. We point out typos and mistakes, and flip through the week's advertisements, most of which we're seeing for the first time (for more on this separation between church and state, read Jennifer Fumiko Cahill's "Look at All These Ads" on page 19). From there, we talk about the week ahead, what cover stories we have on the upcoming calendar and how they're progressing, as well as what needs covering that particular week, including community events, public meetings and evolving issues.

Once we break the weekly staff meeting, a daily and even hourly triage begins, in which we constantly work to juggle both the long-term, investigative stories we're working on with the news of the day, which unfortunately doesn't care much about our schedule or our day-to-day staffing levels. (At full strength, the Journal has three editorial employees dedicated to gathering your news, plus two more for arts and features and the weekly calendar, meaning a cold or a vacation can represent a 33-percent staffing dip.)

Within that moment-to-moment triage, we try to decide which stories have the highest value to our readers and to report them accordingly. That sometimes means a day we expect to pass poring through a pile of documents received in response to a public records act request will instead be spent at the scene of a shooting or a standoff.

And when we do commit to covering a story, we try to get you, the reader, the best information we can. This varies greatly story to story but the basic goal is to gather information at both the micro and macro level from the most informed and trusted sources available. We try to talk to people with first-hand knowledge of the topic of the day, whether they be a witness to a crime or the government staffer who put together the report that will inform a city council's decisions. We seek out subject matter experts and statistics that can put other information into a larger context. And whenever possible, we use open government laws to get a peek behind the curtain, to see the internal communications that drive our systems, whether they be emails between city department heads on a hot-button issue or a probation officer's report that will guide a judge's sentencing decision. (It should probably be noted here that good journalism necessitates time, whether it be the 30 extra minutes to have a scientist explain something for the fourth time so a reporter really understands her study's ground-breaking revelations or an hour waiting for copies at the Humboldt County Courthouse.)

As you can probably tell by now, journalism is guided by an endless series of questions big and small. With that in mind, we should address bias and objectivity, two hot button issues in today's political climate. This may not be a popular take, but we at the Journal acknowledge that complete objectivity is a myth and we all carry bias with us into just about everything we do. It's silly to think of reporters as people who somehow get beamed into covering a story without any notion of how they got there or life experiences to guide them. Instead, the guiding principles of reporting are thoroughness and fairness. Reporters need to acknowledge their biases and the subjective decisions that brought them to a story and make sure they report stories in a way that is fair to all parties involved and on all sides of an issue.

At the Journal, we also own that we have two biases that we wear proudly: We believe in transparency and reform, the idea government should operate in the light of day and be accountable for its decisions, and that we as a community can always be better. We strive to make sure our reporting nudges the needle in those directions.

With all that in mind, if you have a story to pitch, something you'd like to see the Journal cover or a question about why we did what we did, let us know by emailing newsroom@northcoastjournal.com.