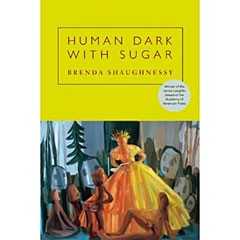 Poet Brenda Shaughnessy is both smart and a smart-ass. With the release of her excellent second collection of poetry, Human Dark With Sugar, she exhibits her deftness in language, wit, sarcasm, poignancy, cleverness and, most importantly, humor.

Shaughnessy opens her collection with the piece, "I'm Over the Moon," in which the narrator is confronting, cursing the moon and its symbol. Then there's the zinger, the killer lines, "How long do I try to get water from a stone? / It's like having a bad boyfriend in a good band." It's precise, apt and hilarious. And she's full of them, scattered, appropriately throughout this collection. But that's only one aspect of her work. There's also an in-depth, critical and questioning look at the self, the body and its identity in a nearly abstract, obscure perspective. Shaughnessy's poetry is an intriguing blend of heady, such as Wallace Stevens or John Ashbery, crossed with the humor of Billy Collins.

Shaughnessy stretches the metaphors and boundaries of "identity." Born in Okinawa, Japan and raised in Southern California, she hints at her upbringing in her 12-part narrative poem, "This Beloved Body." The narrator asks, "What about this body makes it Japanese? / The hair and its hairlessness, the goldish skin, thinness, essentially? / The curves so modest as to be mistaken for straight lines and the many straight lines, as if the body kept itself in line all its life." However the narrator doesn't possess a body that resembles this "model" of ethnic definition. Then, who is she? The narrator is an outsider, doubled. Shaughnessy is a Japanese American from Okinawa, a culture considered on the outside of mainstream Japanese culture. Her work reflects an observer's perspective that is critical of stereotype, both culturally (as a U.S. citizen) and individually (as woman). Her tools are too sharp to be blatant in addressing these issues. She expertly juggles language, dealing with the difficult with the assessable.

Shaughnessy is also reflective on her status as a poet. In the poem "Why Is the Color of Snow?" the narrator states, "I am lonely with questions. / What is snow? What isn't? / Do you see how it is for me. / Melt yourself to make yourself more clear / for the next observer. / I could barely see you anyway." However, the poem continues to move forward, despite her self-deprecation. It's her Woody Allen-esque wit that's so brilliant.

In "A Poet's Poem," Shaughnessy writes, "If it takes me all day, / I will get the word freshened out of this poem. / I put it in the first line, then moved it to the second, / and now it won't come out." The narrator finds herself stuck, only to take a break, smoke a cigarette and write the word "snow" in the snow. Shaughnessy ends the poem with "I can't stand myself." You see what I mean?