Huck Flint etc. in Kneeland, plus Willie, Diego's Umbrella and The Slackers 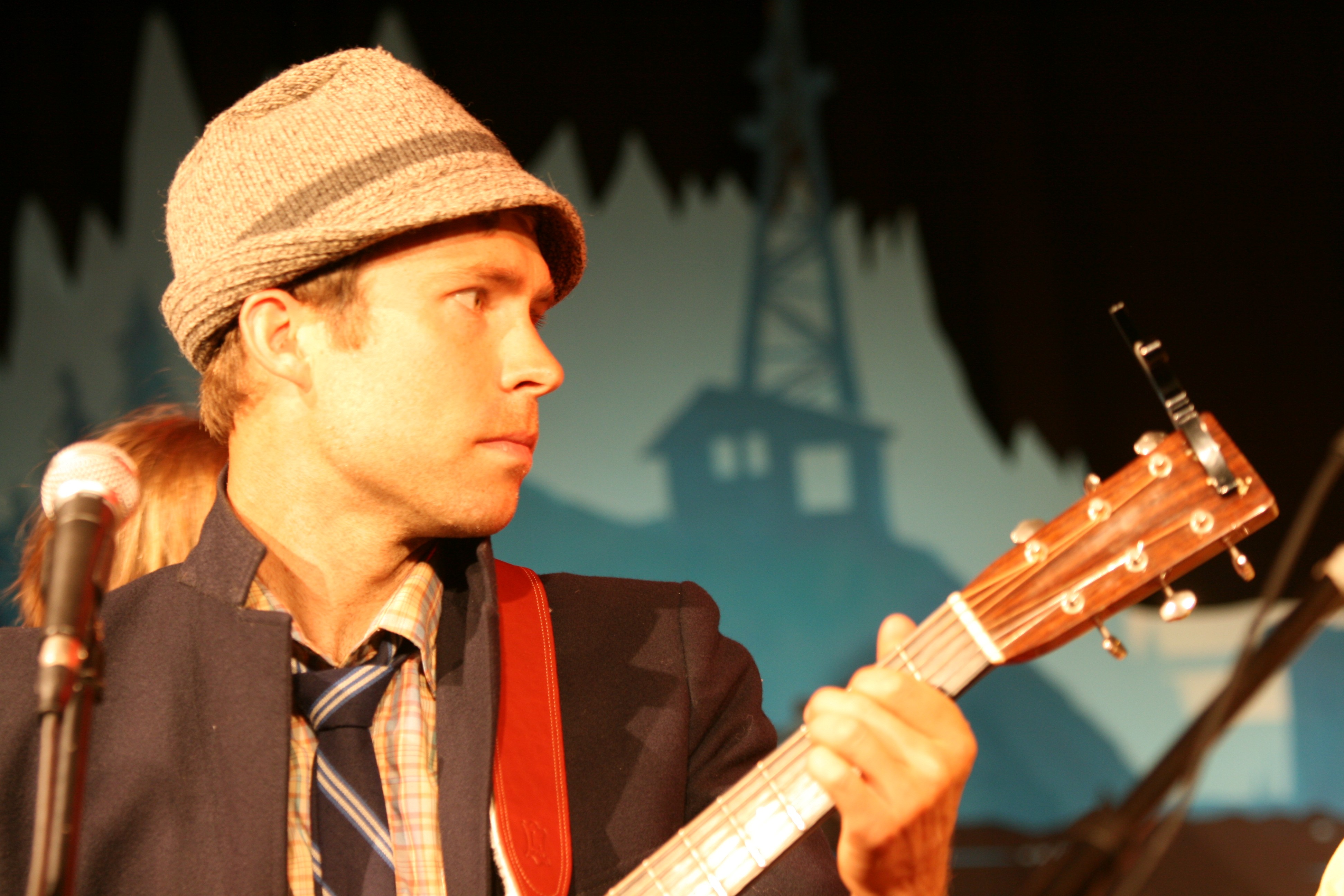 Are you ready for some country music? It's one of those weekends, you know, when people pull out their boots and cowboy hats, start dropping the "g" from the ends of words and sayin' y'all.

All around American music icon Willie Nelson plays on the racetrack at the Humboldt County Fairgrounds on Friday night with his "Family." At 78, Willie is still touring almost constantly, still singing "On the Road Again," among other songs from his deep songbook. "Funny How Time Slips Away," "Hello Walls" and Patsy Cline's big hit "Crazy" were all written in the early '60s before Willie helped invent outlaw country, and that's just the start. The redheaded stranger has been a loveable outlaw ever since, always one step ahead of the cops and the tax man, always outspoken on issues he believes in, be it marijuana legalization or fair treatment of horses. At this point he's an institution with his own chain of steakhouses and his own channel, "Willie's Roadhouse," on satellite radio. Inducted into the Country Music Hall of Fame in 1993, he was inducted this year to the National Agricultural Hall of Fame for his support for Farm Aid. Y'all should head on down to Ferndale and see him (unless you're goin' to some baseball game or other).

The country music rolls on Saturday night with neo-traditionalist Mark "Blame it on Texas" Chestnutt at the Mateel on tour with country rocker Amanda Gray and Whiskey Savage (seen recently at the Redwood Run). White Trash Country Club opens.

Meanwhile, same Saturday night at Cher-Ae Heights you can catch Restless Heart, a mainstream Nashville country combo that has been together (off and on) for over a quarter century.

Then there's your homegrown Humboldt Country. The Fourth Annual Kneeland Music Festival up on Kneeland Mountain features several flavors, with a bit of blues for variety, all to benefit the Kneeland Fire Protection District. The blues are supplied by Mojo Brown, followed by straight-ahead bluegrass by Compost Mountain Boys. Cadillac Ranch is the ostensible headliner. They've honed their steel-driven Cali-county sound to a fine edge and the band should be warmed up from playing the Arcata Farmer's Market earlier in the day. But my prediction is that Huckleberry Flint will steal the show. Huck was a really good gospel-tinged bluegrass band when it started up, but last summer's change of personnel sent it in a new semi-electric direction adding shades of alt. country-rock bands like Wilco. The band's set at the Humboldt Folklife Festival was simply stunning, the music shimmering in the golden light of a Blue Lake sundown, darker than before, but still positive and full of hope, even while singing of constant sorrow. Dustin Taylor's quavering vocals were particularly transcendent, but the whole band has jelled, creating some of the finest music I've heard recently, and not just from local bands.

Moo-Got-2 took its electro-funk explosion on the road this summer and didn't play many local shows. Now the boys are back for a Friday night gig at the Jambalaya (after Arts! Arcata). Joining them is Piper, a formerly local DJ who has been touring with The Disco Biscuits, returning for a hometown spin between sets.

Saturday afternoon you can chose between several quite different gatherings in Eureka: The anti-tweaker Chicken Wing Fest on the Boardwalk (at the foot of F Street) and The Humboldt Pride Festival in Halvorsen Park both promise "live music" without specifics (although Pride has The Real Covergirls of Fresno, a drag show that may include music). On the other hand, the Taste of Orthodoxy Ethnic Food and Dance Festival at St. Innocent Orthodox Church is quite specific: Chubritza offers up its international repertoire for your dancing pleasure (the fest will also have Greek, Slavic and other ethnic foods).

There's nothing particularly musical about it, but Journal columnist Amy Stewart will be at the Sequoia Park Zoo Saturday afternoon telling tales of Wicked Bugs, drawn in part from her latest bestseller by that name.

They call themselves a "Gypsy pirate polka" band, but Diego's Umbrella's amalgam of rock, flamenco, East-Euro folk and reggae has little to do with the Rom people, or your usual accordion-abusing polka combo. (They sometimes dress like pirates however.) Based in San Fran, the oft-costumed sextet has been moving up the music chain of late, landing a slot at Outside Lands for example, which I suppose allows them to say they played with Phish, Arcade Fire and Muse. Whatever. They're good, tons-o-fun, a pure party band, and they're playing at Humboldt Brews on Saturday with local alt. somethings, Strix Vega.

Also on Saturday, the HSU Music Department presents a Welcome Concert for new students and everyone else at Fulkerson Recital Hall. The multifaceted affair shows off the classical and rhythmic skills of faculty members including Virginia Ryder, Cindy Moyer, Karen Davy, Daniela Mineva, Robin Miller, Gil Cline, Elisabeth Harrington and Eugene Novotney and Howard Kaufman (expect percussion of some sort).

For chamber music fans there's the opening of the 22nd season of the Fortuna Concert Series Saturday at the Fortuna Monday Club, with cellist Rebecca Rust and her German-born husband Friedrich Edelmann on bassoon.

Never Die's new hip hop CD is titled Sundays In The Lab, but his release party at the Red Fox is on Saturday, where he'll be backed by The Hip Hop Lounge. Special guests include Ishi Dube, Dot Smith and Kiki. Bring some non-perishable food for the hungry and you'll get raffle tickets for a drawing for clothes and surf/skate gear from various local businesses.

More hip hop Friday at the Fox with Audiopharmacy, a musical movement that started back in '94 with Teao and Zygoat making music under the name II Sense. In '97, they combined with what they describe as "spiritually connected artists" Defiance and Laxman to form Kaotic Souls, which in turn spawned the S.F. indie label Audiopharmacy Prescriptions. Their Cloudwriter Tour celebrates the release of "Cloudwriter," a disc by Ras K'dee. Also on the bill, Eyezon and A People Like Us with Nico Georis.

This Thursday the Lil' Red Lion presents one of those too-many-bands shows with Albuquerque duo Leeches of Lore, local heroes Drifter Killer, DownLooksUp and Formica Man, plus a late add to the bill, Karen. The band from Portland describes itself as a "post-punk/new wave trio, reminiscent of the angular, spastic energy of bands like XTC and the Talking Heads... and unafraid to be a pop band in the context of the modern DIY scene."

Also from Portland: the genre-jumping husband/wife mando/fiddle team David Tiller and Enion Pelta-Tiller aka Taarka. They'll be at Humboldt Brews Thursday with The Singing Nettles opening.

The Slackers roots may be in two-tone ska, but the band prefers the term "Jamaican rock 'n' roll." Formed in 1991, the seven-piece band mixes its ska with soul, swing, garage rock, jazz and reggae, and yes, they rock. Seattle's Georgetown Orbits (another ska band) open Sunday's show at The Depot. Pressure Beat Soundsystem spins appropriate discs (real records) beforehand (and most Mondays at the Jambalaya).