Birds of Chicago, plus Vintage Rock 'n' Soul, The B-Side Players and a bunch of fiddling 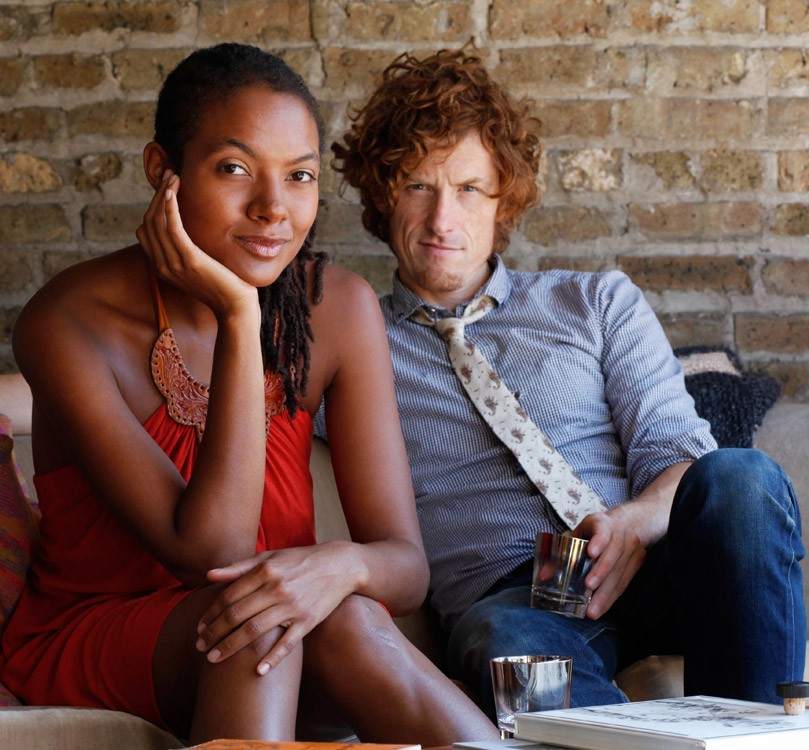 When Chicago-based singer/songwriter JT Nero, leader of the rock/soul/country band JT and the Clouds, started thinking about making a solo acoustic album, he ended up collaborating with his friend Allison Russell, a banjo/ukulele picker and vocalist from the Canadian urban folk outfit, Po' Girl. Their respective bands had played together over the years, forming what Nero described as "a big, loving, only mildly dysfunctional circus family of music, playing on each other's albums and touring together all over the world." The record, mountains/forests, was a harmonious success, and the duo ending up hitting the road under the moniker Birds of Chicago, playing festivals like Kate Wolf. A successful 2012 Kickstarter campaign fueled an eponymous album and more touring ensued.

The record includes a song titled "Humboldt Crows" -- sorry, it's not a local reference, although we do have our share of corvids. The album was recorded in Humboldt Park, the Puerto Rican community in Chicago that the Birds call home. It includes a 270 acre park where, according to the song, crows watch the time pass. "In the grass blades on the hillside there are no days and no nights, just messages in refracted light; they mark the passing time." Nero explained, "It's about the crows that hold court in the park -- big city crows. We joke that you almost never see them fly. It's about this energy around them -- the swirl of Chicago history, a gang fight or whatever -- they're just taking it all in. The singer is almost jealous of them," and their ability to remain detached as time passes.

A fall tour brought Birds of Chicago to the Arcata Playhouse for a songwriter night; the band returns to the Playhouse Monday night, this time joined by guitarist Joel Faulhaber, an Austin-based "auxiliary Cloud" who is part of the Birds' circus family. Local songwriter Lyndsey Battle and multi-instrumentalist Cory Goldman open the show.

Over the weekend at the Playhouse, Jackie Dandeneau's Women of the Northwest is back for another short run: Friday and Saturday evening plus a Sunday matinee. If you did not see this fine musical tale of Humboldt history last time around, well, you should see it this time. Take your mom.

You've heard about bands posting a flier looking for a new bass player or drummer. In the case of Vintage Rock 'n' Soul, it was kind of the other way around, a want ad placed by vocalist Dee Hemingway looking for a band. Hemingway sang for classic rock and blues cover bands on the East Coast before following a man west about a year ago (she emphasized that, no, she did not meet the guy online, and yes, she's still with him). New in town, Hemingway stopped in at Mantova's Music in McKinleyville shopping for a guitar and ended up chatting with owner Anthony Mantova about finding like-minded Humboldt musicians. Hemingway followed his suggestion and posted something on Craigslist. When Vintage Soul bandleader Kevin Daniel saw the ad, he was in the process of restructuring the rock 'n' soul cover band. "I was shopping at Grocery Outlet at the time," said Hemingway. "I basically left groceries in the cart, went to my vehicle and spoke with Kevin about music for about two hours. Thank goodness I didn't have meat or other perishables in the cart." I first heard her sing when the renamed Vintage Rock 'n' Soul tore it up at Woofstock, including a version of the Led Zep classic "Rock and Roll" with Dee serving as a soulful replacement for Robert Plant and drummer Bill Moehnke going full Bonham. Rock 'n' soul indeed. The band has learned a bunch of new tunes since (Dee insists on it). Need a soul fix? Check out V-R'n'S Friday night in the Wave at Blue Lake Casino.

The B-Side Players are what you might call a multi-culti big band. The eight-piece group out of San Diego, fronted by guitarist Karlos "Solrak" Paez, merges trad and modern Cuban sounds, cumbia and street samba with funk, rock, jazz and hip hop to create a very danceable global funk fusion, often with a political edge in the lyrics. New album? Check. It's called Revolutionize. Pick up a copy on the merch table when the Players rock the house Friday night at Humboldt Brews.

Lots of fiddlin' about this week. On the Celtic side you have young fiddler Evan Morden, who has been playing a lot with the multi-faceted multi-instrumentalist Seabury Gould. (Gould is an amazing musical chameleon adept at Celtic, dabbling in Indian kirtan, leading Folklife song circles and playing keyboards in St. John and the Sinners.) Gould and Morden celebrate the release of a new CD, Jigsaw, with a special show Saturday afternoon at Mosgo's, an event Gould describes as "bittersweet" since Evan is leaving Humboldt next week "for other lands." The duo also plays its last gig at Gallagher's Pub Thursday night.

The top shelf bluegrass outfit Audie Blaylock and Redline stops by Humboldt Brews next Wednesday, Jan. 15, touring behind a new collection of high lonesome tunes, Hard Country. "I chose the name because I think it really defines the music," said Blaylock in a note on the band's website. "It still has that hard-driving bluegrass edge, then changes into slower paced ballad type songs as well." He figures it showcases his young band's versatility and "shows just how closely bluegrass and country music are related." Hot fiddler? That would be Patrick McAvinue who's been trading licks with banjo man Russ Carson since they were teens. I heard about this show from Mike "Spumoni" Manetas, ace mando man for Humboldt's decades-old bluegrass combo Compost Mountain Boys. The Boys will be pickin' at Shamus T Bones Thursday night.

On the funny biz side, the Mateel Comedy Cabaret on Friday features Del Van Dyke, who comes out of the San Francisco scene and now teaches comedy classes in Sacramento, and Marvin DeLoatch Jr. up from L.A. Then on Saturday night in Eureka, Humboldt's own Ba-Dum-CHH Comedy invades the swanky Eureka Inn. Turn on the blue lights.

Is Pressure Anya  striving for Arcata dance floor domination? The DJ duo is now following Dirty Dancing Thursdays at the Alibi with something called Flashback Fridays around the corner at the Jambalaya. "For the New Year, '80s Night is now Flashback Fridays," explains Gabe Pressure, promising "more nostalgia" in the mix. This Friday P/A gets assistance from DJ Red and Zephyr, playing dance tunes from the '70s through the '90s with special attention to New Wave and punk, "the type of music the Los Angeles radio station KROQ was famous for in the early '80s."

Deep Groove Society's Sundaze (on Sunday) at the Jambalaya welcomes the Subsonic Visionaries tour with Denver bassheads Atomic Reactor and kLL sMTH, aka 2Nutz, plus Pressha and Ohm Wrecker, both from Seattle. DGS notes, "Also featured will be Basscraft's brand new, never before heard Void sound system. Need we say no more?" We're guessing this means even deeper gut-rumbling bass.

And speaking of bassy music, it's looks like Womp Womp Wednesdays at Nocturnum is on hiatus. The club's marquee says it's closed through January. A sign in the window suggests the reason: It's an ABC notice announcing that the liquor license is suspended until Feb. 6 for some unnamed violation of the state Alcoholic Beverage Control Act. Guess something more than the dancing got out of control. Womp.