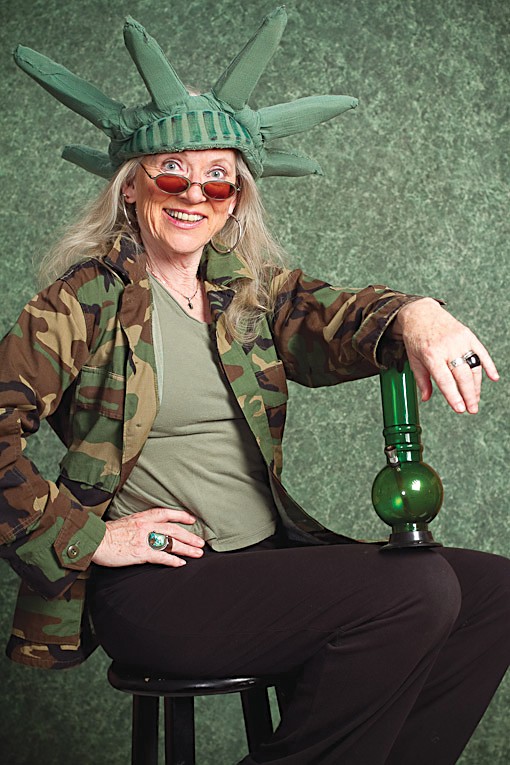 The credo of the internationally renowned theatre company and school we know simply as Dell'Arte is akin to that most famous portion of Lincoln's Gettysburg Address -- "of the people, by the people, for the people." For Dell'Arte's artisans, it's something they call "Theatre of Place" -- plays "about where you live, for and with the people where you live ... work that goes deep into the landscape of place and people."

For its annual Mad River Festival, starting June 23 and running well into July, Blue Lake's Dell'Arte Company is hard at work on a musical theatre piece that takes a look at the green side of Humboldt's current landscape. As we go to press, Mary Jane: The Musical is still a work in progress, and the way Michael Fields and Joan Schirle, Dell'Arte's co-artistic directors see it, the piece will still be a work in progress when they debut it later this month. The plan is to continue their exploration of the place marijuana has come to hold in our community. This first run is simply a starting point.

It began with a character called Mary Jane (to be played by Schirle), a first-generation dope grower who came to Humboldt in the early back-to-the-land days. All they needed was a play and a playwright; Schirle and Fields were too busy to do it. Plus, they  recognized their understanding of the "phenomenon" of pot in Humboldt was not deep enough.

"The amount of research we needed to do, and still need to do, into how the marijuana culture pervades Humboldt life and, beyond that, Californian life, and beyond that national life, is something we didn't have time to get into adequately," Schirle said. "We just didn't know enough to make a coherent play."

Fields, who is writing the book for the musical, said he has wanted to do something on pot in Humboldt for years. Not long ago, he read a story in the Journal about a faculty group at Humboldt State working to create a national center for interdisciplinary research on marijuana (see "Higher Education," April 28). "I was talking to this guy Josh Meisel," said Fields, referencing the HSU associate professor of sociology who leads the study group. "They're doing research at Humboldt State, trying to find metrics to measure the economics and looking at it from all different angles: psychology, criminology and so on. I was telling him, 'I don't know that we have a coherent point of view on it' -- and people expect us to have one."

As Schirle noted, this is a "prominent and volatile issue," and while Dell'Arte is certainly known for work with a strong point of view (the Scar-Tissue mysteries, The Road Not Taken and Intrigue at Ah-Pah, for example) they weren't quite ready to take a stance on marijuana.

So they talked to Lauren Wilson, who wrote the main feature for last year's Mad River Festival, the sharply funny, very local Blue Lake: The Opera. But she didn't have time to write a play.

In the end, they decided to try crowd-sourcing: They asked local musicians to write songs about pot. "That was the impetus to invite other people in, to get the community's point of view basically," said Fields. "They're living in it just like we are."

He admits that the slice of the community involved, musicians, may have an atypical point of view regarding marijuana use -- notoriously so. Many of the dozen songs submitted are not critical of drug use. Fields points to Kulica's "OG It's Kush to be Mary Jane" as an example. "It's not anti-marijuana, not at all," he said.

The play's setting is an imaginary event called the Emerald Ball, loosely based on an actual harvest gathering/growers' competition called The Emerald Cup (see Kym Kemp's Journal story "A Cannabis Carol," Dec. 16, 2010). "That puts us into the milieu of the grower culture," said Schirle. "The character Mary Jane is an older grower, part of the generation that didn't come here to grow pot. [Her generation] came for other reasons. They came for idealistic reasons, for survival reasons, to raise their families away from urban blight."

Two songs in Mary Jane are by Southern Humboldt musician/playwright Joani Rose, who said she talked with Fields about the show a few months ago when she'd come to Blue Lake to see a Dell'Arte clown show.

"Michael asked me if I would like to participate by writing a song," said Rose. "He said there was already one written about indoor vs. outdoor." (That would be Lila Nelson's quirky love song, "Grow Inside.")

"I've written songs for lots of shows," Rose continued, "but usually there is something to hang your hat on. In this case, [marijuana] was pretty much all I had to go on -- no script, no plot, no characters ..."

Since everyone in SoHum is talking about the "implications of legalization, over saturation in the market, what's next?, etc.," she said, she wrote a song about a struggling grower called "Ghost Town" that asks, "What's gonna happen to our wonderful town when the income stops coming in?"

Joyce Hough and Fred Neighbor will sing it as a duet in the show. "I also submitted a song I had already written called 'My Son,' which they like," said Rose. "It's about the effect of the pot-growing culture on our kids." (Schirle/Mary Jane sings it in the show.)

The sharpest critique of the impact of the business of pot comes in "The Industry," a churning heavy metal tune with lyrics that Fields says "really point the finger at all of us and our culpability."

The lyrics, written by a local who prefers anonymity, show the dark side of our cash crop. "The stench of diesel as it's surfacing to the earth ... I am the industry. Profits come first. I hide in your neighborhood, hide behind closed doors. Hear the lamps buzz as mold spreads on the floors. Jacked-up housing prices, skewed economy. I am the industry. It's all about me."

The show's musical director, Tim Randles, contributed "Why is Whiskey Legal and Pot is Not?" -- a song with a clear p.o.v., in opposition to marijuana prohibition. On the lighter side, you have the Steely Dan-esque "Humboldt Honey" by Eldin Green, a pop number packed with local references describing a tie-dyed, dreadlocked blonde who "keeps the bong lit until the weed is gone." Raconteur Jeff DeMark's "Christmas Eve in Hilo" tells a tale of coming across "gin and chronic" while vacationing in Hawaii. Zuzka Sabata's "Green Like Money" addresses the cash crop aspects of pot, appropriately enough, to a reggae beat.

How do these disparate points of view fit together? "Hopefully the songs will inform the writing of the play," said Fields, who was still working on the piece last week. We assume he'll be done before Schirle returns from Denmark for rehearsals. We also assume the show will be funny, entertaining as hell, and thought provoking, as Dell'Arte plays are, holding up a mirror so we can see ourselves and this place where we live in a new light.

Mary Jane: The Musical opens June 23 and runs weekends through July 3, in Dell'Arte's Rooney Amphitheatre. Tickets are on sale now at www.dellarte.com, or call the box office at 668-5663, ex. 20.