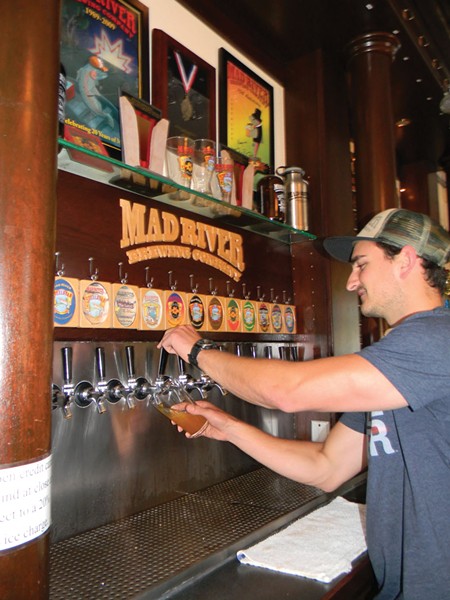 Great relationships can benefit from a little time apart. No matter how smooth, how satisfying the partnership, stepping away can be a revelation.

If you've been drinking India pale ales, nothing may seem as beautifully matched as that sharp, hoppy tang and that higher alcohol buzz. They dance inseparably across your senses, satisfying taste and alcohol receptors alike in a happy, beery blur.

An IPA with less alcohol? Ginger Rogers without Fred Astaire?

A session IPA sends some of the alcohol off to the wings, letting the hops sashay in the spotlight. These beers often top out at 4.5 percent alcohol, compared to 6 or 7 percent in many IPAs, and 8 percent on up in double IPAs.

Session IPAs are a relatively recent backlash to the long, steady march of double and triple IPAs produced by some of the best craft breweries over the past 15 to 20 years. They've been amazing beers, and I've drunk gladly along with the hoppy tide that has made IPAs one of the most enduring beer styles of the past generation. But they're not the only beer on the shelf.

I have to make a confession. I am a beer trollop, a promiscuous sampler, unfaithful even to my favorites. I crave something new. Even so, I never got around to trying a session IPA, maybe falling unconsciously into the assumption that less alcohol meant less flavor.

That changed in late March, when I was foraging at Grocery Outlet and saw Stone's Go To IPA. Stone is one of my favorite not-Humboldt breweries, and I had to see what the creators of Arrogant Bastard could do with a 4.5 percent alcohol IPA.

Fast forward to a chilled bottle at home, a deeply dubious swallow, and a surprised mental "Huh."

And that was an out-of-area bottle from a six pack nearing its "best by" date.

You don't have to stoop to that.

One is a serious first. After 26 years of beer-making, Mad River Brewing Co. is dipping a toe in the sessionable waters with its River Day Session IPA, which just became available on draft in the brewery's Blue Lake taproom. Its 5 percent alcohol level puts it at the higher end of session beers.

River Day Session IPA is a test, an attempt to stay in Mad River's characteristically higher-alcohol range while meeting growing demand from bars for quality, lower-alcohol beers, said Tera Spohr, Mad River's sales and marketing coordinator. "We're going to get feedback from customers on what they like and don't like about it," she said.

In Fortuna, Eel River Brewing Company has been brewing session IPAs for a while, and the beers tend to sell swiftly on tap, according to brewer Matt Vivatson.

"With everyone loving those hoppy beers, a lighter, more sessionable one was really a no-brainer," Vivatson said. When we spoke, he had just bottled a new beer in Eel River's Emerald Triangle series, this one called Emerald Triangle Session IPA, at 4.5 percent alcohol. It went on tap last week at the brewery's Fortuna taproom and grill, and it should be in bottles by mid-May.

Once I started looking into lower alcohol IPAs, I heard "sessionable" applied to all sorts of beer styles. It's a kinder way to say weak beer —weak as a feature, not a flaw. Traditional beer styles that often land at the lower end of the alcohol spectrum, down at 4 percent or below, include English bitter, Gose, and dry stout. There's a whole festival of porters, ales, stouts, IPAs and pilsners that don't knock you sideways in Oakland later this month.

If you'd rather get your lower-buzz brews in Humboldt, there's more to choose from. You can find Funky Berlin Cabernet (3.8 percent alcohol), a sour wheat beer made with cabernet grapes, at Humboldt Regeneration Brewery in McKinleyville. Redwood Curtain in Arcata often has its Special Bitter (4.2 percent alcohol) on tap. Lost Coast Brewery's Blonde Ale comes in at 4.7 percent alcohol. Six Rivers Brewery in McKinleyville doesn't have anything below 5 percent right now, says brewmaster Carlos Sanchez, but he's made session IPAs before. He doesn't like the style much. "On a lighter beer I don't want it to be all hoppy," he told me. "In a session beer I like something kind of pale colored and mild on every level. Quaffable."

Me, I want a less-alcoholic beer that's still interesting, one that's got flavors I notice and an aftertaste I enjoy lingering over. What do you prefer in a sessionable beer? Taste a few and let me know.

A date with beer:

Thursday, May 7, 7-9 p.m., talk about home brewing, bring your own examples or taste the work of others at the regular monthly meeting of the Humboldt Homebrew Club at Humboldt Beer Works, 110 Third St., Eureka. Meetings are free; club dues $20 annually.

Saturday, May 23, 1-5 p.m., Third Annual NorCal Session Fest. Taste from nearly three dozen craft breweries at Jack London Square in downtown Oakland. $25 in advance or $30 at the door gets you 10 tickets for 5-ounce tastes.

Carrie Peyton Dahlberg is a Trinidad-based journalist who focuses on science and medicine, with occasional digressions into beer. Write her at beerstainednotebook@gmail.com.