Getting high in the forest


About 40 feet up in the air, Matt Paris took another step on a 1-inch slackline that stretched 400 feet across the redwood forest. The line began to bounce and shake. He swung down about 5 feet and back up again as he approached the middle section with the most give.


Paris squinted, his breath loud in the otherwise silent forest, and took two more steps; he moved his arms from one side to the other to stay centered on the thin blue line. Paris began to wobble. He turned his bare feet sideways to steady himself. Facing straight ahead with a blank expression, Paris took deep breaths to regain his composure.


Paris was in the middle of the line deep in a redwood forest. He said Humboldt is known for having good slackliners with a community of about 20 people. Paris is from Los Angeles and said the community here is even larger despite the contrast in the population size. “Having 20 people in one town is pretty big,” he said.

Humboldt's huge redwoods and giant coves make for scenic lines that attract plenty of people to slackline in here. The only problem with slacklining up in the trees of the Arcata Community Forest is it's not exactly legal. Humboldt slackliners like to keep their locations somewhat hidden or hard to find.

Arcata City Manager Karen Diener said this kind of slacklining — up high with harnesses — is prohibited within Arcata city limits because it poses a threat to the environment and safety of the slackers. Right now the city is making revisions to the redwood park master plans that could incorporate a space for slacklining, though it's not clear exactly how high up. "Right now if a ranger finds a slackline they will take it down," Diener said.

"Right now if a ranger finds a slackline they will take it down," Diener said. tweet this 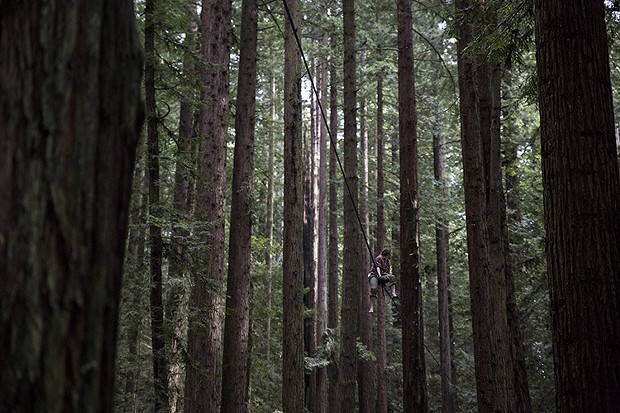 Paris said the fact that slacklining is prohibited is ridiculous. He made the comparison to mountain biking or swimging on a park swing set. He said the activity is much safer than people think and the city has just decided to prohibit activities instead of learning more about them in the community.

The line began to shake again and Paris shot his arms up as a last resort to steady himself. He let out a sharp yell as he began to lose his balance. Sharp breaths in and out echoed through the redwoods as he again tried to calm down.

For a split second the line steadied. “Yeah Matt,” his friend yelled from about 200 feet away. Paris took another series of deep breaths but the line began to shake yet again. A sound like the crack of a whip echoed throughout the forest as Paris fell. The entire line shook violently and Paris flipped forward, his brown visor ripped off from the momentum of his fall.

A 4-foot green rope and titanium ring attached to his harness caught him and he dipped down about 10 feet. He let out a muffled laugh and swung his right leg up around the line in order to hook and steady himself.


“It’s a great way to travel; it’s the best accessory sport,” Paris said. “You can take [a slackline] anywhere with you.”


The 400-foot strap, known as the 420 line, was rigged in the forest using a professional pulley system with equipment designed for long slacklines. It's considered a "midline" as opposed to what’s called a highline. Paris said the differences are heavily debated within the small global community.

“If it’s high enough that if you fell off, you would die, that’s a highline,” Paris said. “Midlining would just break some bones.” tweet this

“If it’s high enough that if you fell off, you would die, that’s a highline,” Paris said. “Midlining would just break some bones.” 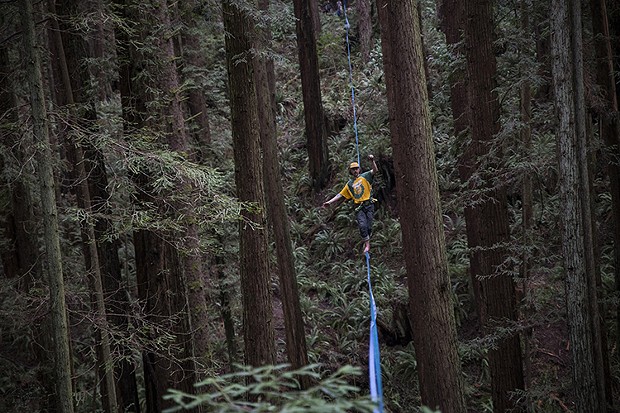 The learning curve for highlining can be very steep. Most start with a ground line that's typically 2 inches in width — known within the community as "trick lines." The other type of slacklining uses a longline, which is similar to a midline except closer to the ground so you don’t need a harness.

“I did a 70-foot line [in length],” Paris described his first highline. “Thirty feet up, and I was super shaky, when I fell I ripped off all the blisters on my hands, it was great.” tweet this

“I did a 70-foot line [in length],” Paris described his first highline. “Thirty feet up, and I was super shaky, when I fell I ripped off all the blisters on my hands, it was great.”


Joey Croft cranked down on the end of the blue line, tightening it through a rigged pulley system that wrapped around a thick redwood. Croft used two lines, one main line that he and another slackliner were tightening, and another safety line the same width that hung a little looser below.


Croft went to college in Vermont. There he met an alumni from Humboldt State University who was teaching a one-day slacklining course. The alumni told Croft about West Coast slacklining and more specifically Humboldt slacklining. Croft said Humboldt is known for having a large, prominent slacklining community. 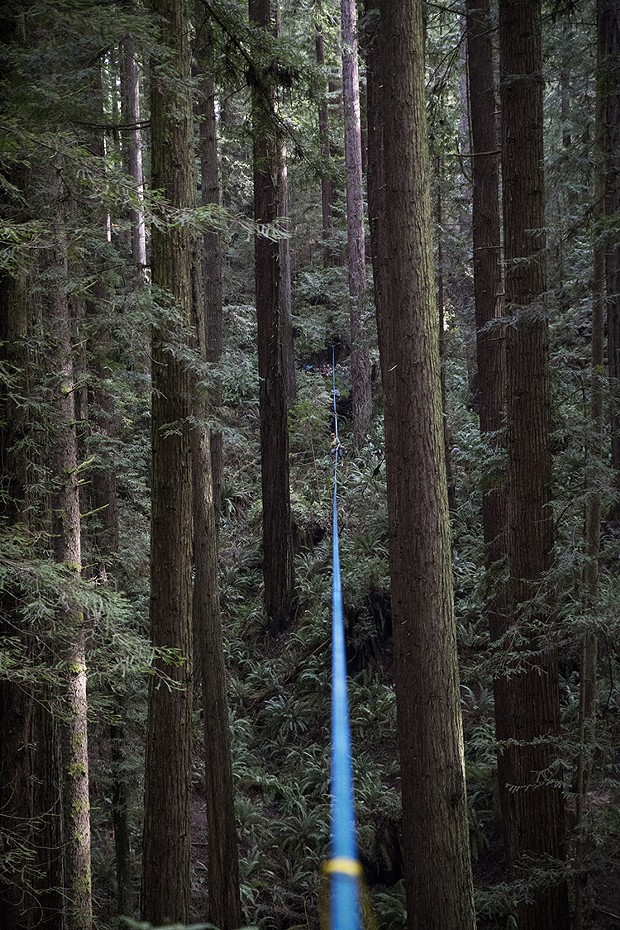 One of the things Croft enjoys about the Humboldt slackers, is the lack of competitiveness within the community. The slackliners tend to keep it an individual sport in which the slacker can use the line as a type of meditation.


“Sometimes I’ll just go to the middle of the line and just bounce around for fun,” Croft said. “With highlining, it’s a personal thing.”


Croft said he doesn't think slacklining should necessarily be illegal, saying it falls into a sort of gray area of Arcata law that doesn't clearly define the types of slacklining prohibited. He said slackers in no way hurt the redwoods or the vegetation in the surrounding area. He said they set up a padded layer between the bark and the rigged line and when setting a line in the forest they hike the same path in and out to protect the vegetation.

Both Croft and Paris traveled all over the United States for slacklining festivals. They said the largest communities are mostly on the West Coast: California, Washington, Oregon, Colorado, Arizona and British Columbia. But there is also a large international community that Croft says is growing.


“I have seen some close calls,” Croft said. Rigging a line is often the most dangerous part of highlining. Croft said a lot of areas where you set up a highline are very exposed and sometimes require rock climbing techniques to get the line up and ready for a walk.


In highlining there are intense moments followed by complete calm and relaxation. Croft said it’s all about controlling your adrenaline and regulating your breathing — controlling your fears and learning how to work through them.


“There’s definitely times where you’re scared and shaking,” Croft said. “But the idea is to calm that down and regain control.” 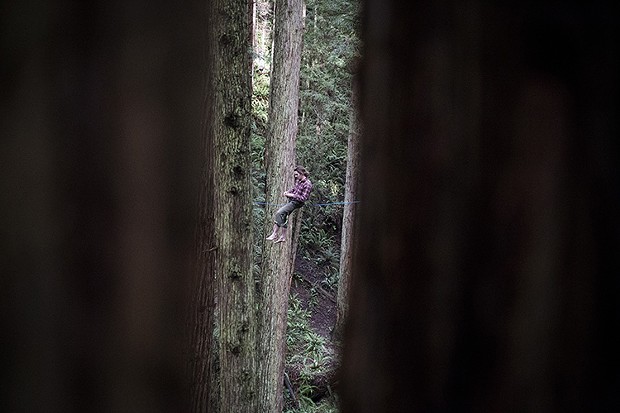