The day of discussion on health care reform was billed as an experiment in “deliberative democracy.” On Saturday, around 4,500 randomly selected Californians participated statewide in a high-tech teleconference with sites in eight cities facilitated by a 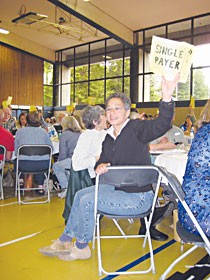 The day of discussion on health care reform was billed as an experiment in “deliberative democracy.” On Saturday, around 4,500 randomly selected Californians participated statewide in a high-tech teleconference with sites in eight cities facilitated by a group called CaliforniaSpeaks. Humboldt State University’s West Gym was the local site. There were around 470 attendees from around the county. This reporter was among those randomly selected.

It proved an impressive show of modern technology, with $4.2 million spent creating a “21st Century Town Meeting,” with satellite hookups feeding data to and from small discussion groups at each location. As we talked amongst ourselves, someone at each table manned a computer relaying snippets of opinion, moving the discussion forward. Polls were taken on various issues, and almost instantly you’d see the compiled results from around the state.

While the topic of the day was ostensibly health care, in reality most of the discussion was about health insurance — specifically, two proposals before the state legislature that would change the way California’s health insurance system works. Gov. Arnold Schwarzenegger, who spoke from Los Angeles at the opening of the discussion, is offering something known as the “individual mandate” plan, which would require all Californians to have some sort health insurance, with the state footing the bill for the poor. His plan was compared with a compromise bill, AB 8, presented by Assembly Speaker Fabian Nuñez and Senate President Pro Tem Don Perata, both also present. Their “employer mandate” bill would require businesses to insure their workers.

A major concern of many at the Humboldt meeting was what was not on the table: SB 840, a reform bill presented by Sen. Sheila Kuehl (coauthored by Assemblywoman Patty Berg). Known as the Single Payer plan, it would basically cut the insurance companies out of the picture, providing universal health care for Californians.

Around lunchtime yellow signs crafted from the material handed out at the meeting started popping up around the West Gym saying “Single Payer” or “SB 840.” Before long scores of people around the room were holding them aloft, among them, Dr. Wendy Ring, who runs Humboldt County’s rolling Mobile Medical Office.

Apparently someone listened. The agenda for the day was adapted to make room for some talk on the subject at the end of the discussion. But it wasn’t enough for Ring. She lingered after the most participants had departed, joining with a similarly disgruntled local pediatrician, Dr. John Sullivan, to engage the America Speaks site representative with a spirited critique of the proceedings and the discussion guide handed out at the start of the day.

“What’s going to come out is that all these Californians got together to do this thing, and they agree with [the governor],” Ring said. “They are going to use the fact that all these good people came here to help — many of whom do not support what he’s trying to do — to sabotage the true health care reform that we need.”

“The way [issues] were put down was slanted and biased from the get-go,” said Sullivan. “Wendy and I aren’t the only ones who saw this, so I don’t know how it escaped your attention.”

Katie Fry responded saying that she felt the system worked, in that Single Payer was not ultimately ignored. “I think what you’re saying was heard by the leadership,” she said. Eager to move on to a wrap-up meeting with event facilitators already underway, Fry tried to draw the conversation to a close. “The discussion guide’s written,” she said. “The meeting is over. I do feel that this point of view has been heard.”

With that Fry broke away and the two doctors ambled toward the entrance, continuing their private conversation about “real” health care reform.