Spreading the love with geocaching 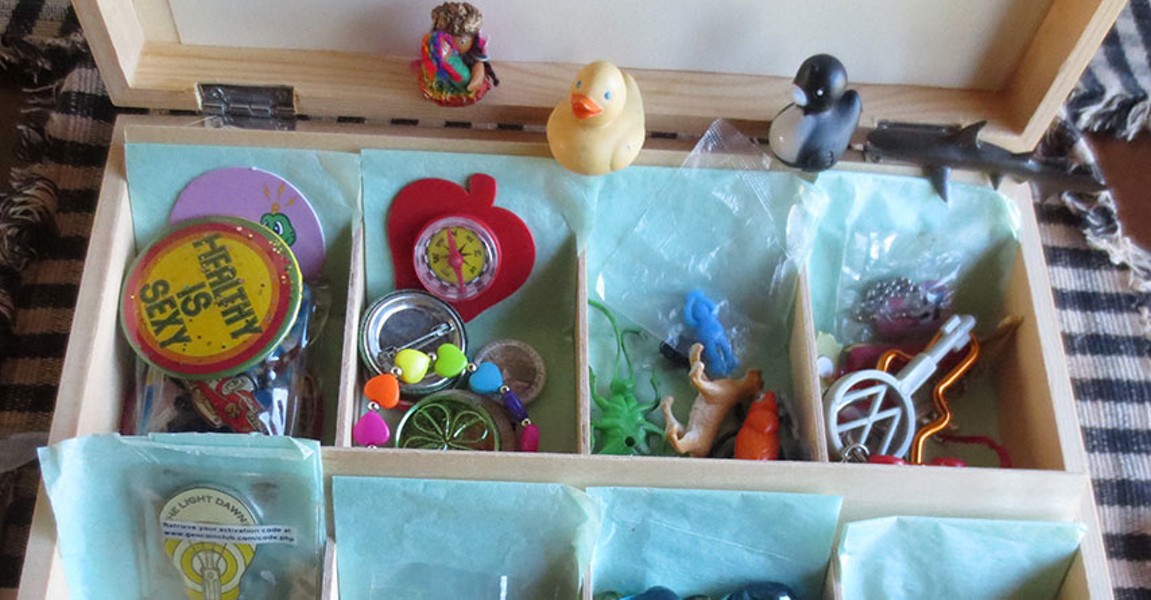 Over an after-work round of brews, healthcare worker Jessica Davis pipes up, "Well, I'm a treasure hunter," she says, "I look for GPS locations with hidden treasure caches." She slips out of the room and proudly returns moments later with two jewelry box-sized treasure chests. One contains a miniature mountain lion, smooth chunks of colored glass, a quartz crystal, a rubber duck keychain, a shark figurine and more tiny, colored trinkets reminiscent of sandbox make-believe. "See," she says, holding out a bright rainbow heart bracelet, "these are some of the things I've found." She leaves her own little baubles behind, too.

Geocaching is what happens when inquisitive tech geeks hide things and then dare each other to find them. To date, there are more than two million geocache sites all over the world (there's even one in Antarctica). It started back in 2000, when techie and computer consultant David Ulmer hid a bucket of random objects in the woods near his home in Beaverton, Ore., and challenged his tech buddies to find it in order to test the accuracy of the newly-improved GPS. It's everywhere in the world, even Old Town, the Arcata Plaza, the community forest and the marsh.

Davis has a second box of trinkets that are "track-ables" with a specific geocaching mission. With their own individual GPS markers, you can trace them as they move from hiding place to hiding place all over the world. She selects a small bunny rabbit and explains, "This one's mission is to get to San Diego. Next time I head south, I'll find a cache and leave her there to get her closer to her destination."

Ready to go hunting? Sign up at geocaching.com to discover this world of secret stashes all around you. Humboldt County is home to hundreds of hidden treasures in town, on the beach, in the forest and even out at sea. Of course, you will need a GPS device or tracking software. If you have a smart phone, you can download the geocaching app directly from the site. The Geocaching app is solid — it also can link you to clues if you're having a tough time in the field. Go to the maps section on the website and find an area you'd like to scour — again, they're everywhere! The caches also have difficulty ratings, so on your first few times out, select easy ones. That way you're less likely to get frustrated and give up.

According to the maps, there's one at Arcata City Hall, where Heather Leigh Stevens, recreation manager for the city, has watched treasure seekers investigate the ferns, climb the wall and tap on the water fountain just outside her office. "It makes us smile and sometimes laugh," says Leigh, who has seen her fair share of students, traveling retirees and occasional traveling families trying to find the cache in the past three years. She also notes that the people who do this tend to be focused and tenacious — they keep at it until they find the treasure. "I rarely hear people resort to anger or profanity," she says. "Most people in this office know where it is, and if someone is having a really hard time, we'll offer clues. For us in recreation, we like seeing people poking around in the bushes, getting out, getting active."

If you attempt the Arcata City Hall cache, note that it has an "easy" rating, even though the overhang of the roof skews the satellite signal. It took this reporter 40 minutes. Though said reporter did not swear, she did utter a whole string of "dangs," "holy cats" and "for goodness sakes" before finally finding it without a clue from the recreation folks. She also crawled around the water fountain numerous times.

Curious? Get out there, Humboldt. And let us know what you find.

Get Out GeoCaching Outdoors Maps