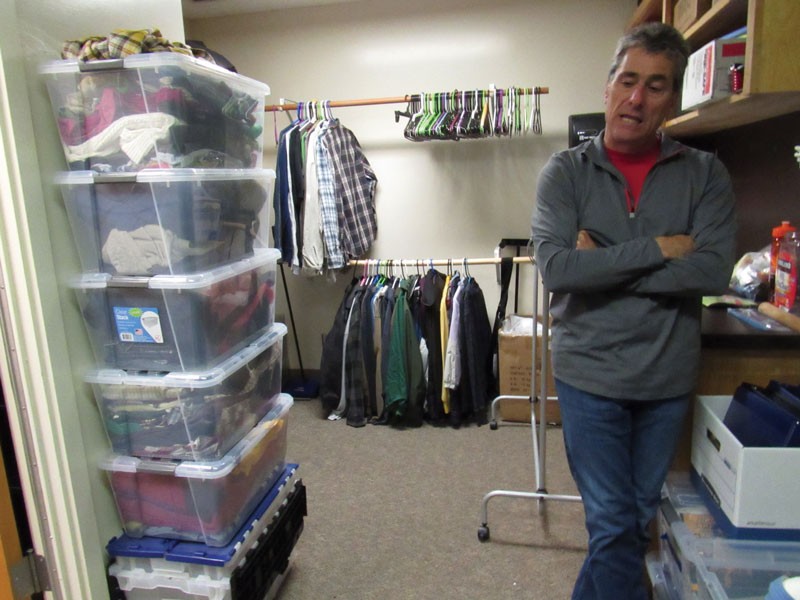 When the Humboldt Housing and Homeless Coalition released its Point In Time Count last month, one large demographic was left out: homeless students. The Humboldt County Office of Education (HCOE) estimated the number of homeless children in the public school system at 1,058 for the 2013-2014 school year – 5.8 percent of the total public school population. Homeless children face significant obstacles to obtaining an education, from food insecurity and transportation issues to the usual social anxieties of adolescents, anxieties amplified by lack of access to basic hygiene.

"Laundry is a huge thing," says Roger Golec, coordinator for the HCOE's Foster and Homeless Youth Education Services. "There are no laundromats east of Blue Lake."

To help students overcome the stigma of arriving to class in dirty clothes, many schools have washing machines on site. Others have resource closets with donated clothes, soap, toothbrushes and feminine hygiene products. Some schools send their students home with food over the weekend. They attempt to connect them and their parents with local resources. The food, the clothes and hygiene supplies are often donated by volunteers and school staff. Golec recently cleaned out and reorganized the supply closet next to his office in anticipation of the new school year. Judging by stuff alone, there seem to be ample supplies to clothe and clean every student in need. But addressing the causes of homelessness and the psychological barriers to success requires resources less tangible.

The idea that homeless students should have access to special educational rights is a relatively modern one. The McKinney-Vento Homeless Assistance Act, passed in 1987, offers protection to homeless children, defined as "individuals who lack a fixed, regular, and adequate nighttime residence." Under McKinney-Vento, money is allocated by the federal government to ensure that qualifying students are able to receive transportation to school, can enroll immediately in school without documentation, and that liaisons (such as Golec) are appointed to oversee student success. A guiding philosophy behind the act is that education is a right, not a privilege.

Despite the existence of the McKinney-Vento Act and its reauthorization under No Child Left Behind, the amount of money actually allocated to help homeless students is pretty paltry. The federal money is awarded to each state, and then districts bid on an individual basis. Humboldt received two such grants, one for the Humboldt County Office of Education and the other for Eureka City Schools, to the tune of $70,714 each. Divided by the number of homeless students, it breaks down to about $130 per child. California has a total of 300,000 homeless students, and the federal government awards the state about $25 per child, per year. McKinney-Vento funds are used to partially pay the salaries of Golec and his caseworker, Anna Kanouse-Tempelaere. Districts are also expected to spend a portion of their Title 1 funds – money allocated by the federal government to districts with high percentages of low-income students – on homeless students.

Cheryl Ingham, director of instructional leadership at HCOE, says that it's "up to individual districts how much they allocate." Eureka City Schools, for example, spent 2 percent of the $1.1 million it received in Title 1 funding on homeless youth specifically. That money, says Ingham, goes to "clothing, backpacks, school supplies, meals and other support."

Transportation may be the most significant expense for some districts. Under the McKinney-Vento Act, homeless children have the right to transportation to their school of origin. This is a significant thing in the life of a child, according to Golec. Homeless youth may experience an average of three school placement changes per year. Moving from town to town, from school to school, is enormously disruptive to the educational process and social development of children, many of whom see school as their only source of stability. Golec's department may work with children and their families to help students stay with their peer groups, even if it means taking the bus from the next town over.

Golec has been working in the program for foster youth and homeless services for six years. Prior to that he was a counselor at Eureka High School and before that, an outreach worker with the Youth Service Bureau. He says that one of the biggest challenges when he came on board was facilitating communication and training between different schools and agencies. Homeless youth are unlikely to self-report, and their parents are equally unlikely to ask for the services to which they're entitled out of concern that they will become entangled in the child welfare system. Often it's a bus driver, a school counselor or even another student who will realize that a child doesn't have a stable place to live.

Educators need to understand what qualifies a child as homeless under McKinney-Vento. For example, a student may go from housed to homeless during a school year due to domestic violence, an issue Golec says is disproportionately represented in the youth with whom he works. Children who are couchsurfing, doubled up with other families or living in motels qualify as homeless. The number of homeless children in the United States has risen consistently throughout the last decade, due both to the recession and better reporting methods. According to the National Center on Family Homelessness, one in 45 children experiences homelessness each year.

The stakes are high when properly identifying and connecting homeless students to resources. It can mean the difference between academic failure and success. Tracking students with housing insecurity allows their academic records to travel with them, meaning they can graduate on time. Allowing them to begin school the day they show up – without documentation and records – may keep them in the classroom. Connecting them with resources, with free vaccinations, dental care and food, may mean the difference between life and death. Golec says identifying and helping students early is crucial. Homeless high school-age students, who might be emancipated and couchsurfing, are at a higher risk of dropping out. They miss an average of three weeks of school annually and are at a higher risk of becoming teen parents.

Along with homeless children, Golec and Kanouse-Tempelaere work with foster youth, a population with a similar profile. An average of 220 foster children go through the educational system in Humboldt each month. According to a 2010 study from the University of Chicago, 20 percent of foster children don't graduate from highschool, and only about 8 percent obtain college degrees. Golec's department is helping organize a resource fair on Aug. 27 where these children can pick up free school supplies, clothes and get new haircuts.

Small things like these and the ability to stay in the same school throughout multiple grades make a big difference in students' lives, he says, as does having a relationship with an adult they can trust. In the resource closet of the Humboldt County Office of Education, there are a few raincoats, boxes of toothbrushes and bars of soap, but not a lot of shoes. Plenty of people have donated shoes, he says, but kids don't usually want the pairs that are there. It's better to take the child shopping so they can pick out their own.

"It's labor intensive, but by taking someone shopping you build that relationship," he says. "It sounds silly, but kids are kids. That's when you do your best work. That's when they start coming to school."