HumBug: A March of Butterflies 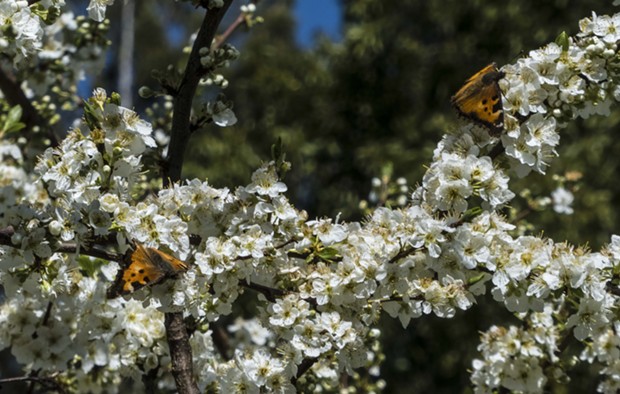 It’s been a long, wet and cold March, but one sunny day brought out the early spring butterflies.

I watched half a dozen California tortoise shells (Nymphalis californica) feed and chase each other among the flowers clothing my green gage plum trees. I’m not sure if these aerial acrobatics were part of a mating ritual or a territorial dispute. Most of the individuals I saw showed a little wear which could have been from either activity. This rust and black species can have several generations in a year. In especially good years their populations can explode into swarms. Fortunately their larvae feed on non-crop items and so aren’t in direct competition with humankind.
The weather was nice for a change so, armed with cameras, I took a walk along “my stretch” of the Van Duzen River. Along the way, margined whites (Pieris marginalis) patrolled over the milkmaids in open areas. Like their close relative and common garden pest the cabbage butterfly (Pieris rapae), their larvae dine on members of the mustard/cabbage family of plants. 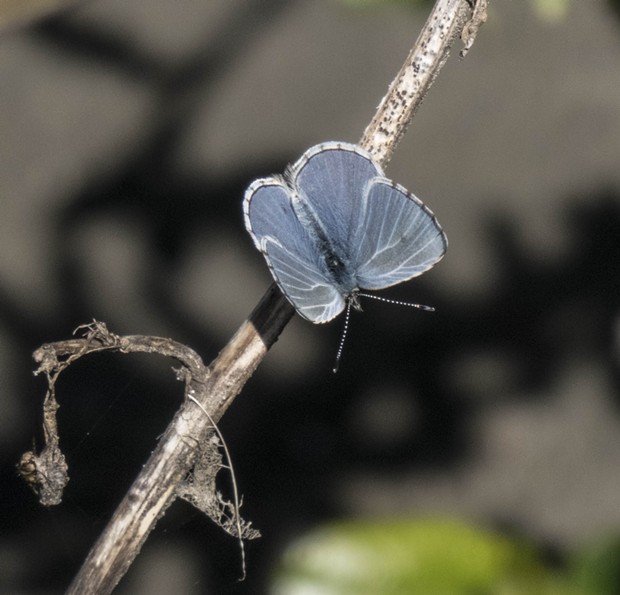 Along the river, I followed several tiny blue butterflies. They frequently landed in damp sandy areas with wings closed showing their light gray and speckled underwings. Finally one landed on a twig and went into “display mode,” showing off its pretty blue upper wing surfaces. From the photo I got, I was able to identify it as an echo blue (Celastrina echo). It is another locally common species that has multiple generations per season. Their larvae and pupa are believed to have a symbiotic relationship with some species of ants. The destruction of ant habitat in the San Francisco dune areas resulted in the extinction of the Xerces blue, a closely related species.

Last but not least, I was pleasantly surprised when a flash of yellow and black dove into the willow thicket I’d been watching. It was one of my favorite butterflies, the anise swallowtail (Papilio zelicaon). Its wings were pristine and brightly colored so I guess it had only recently emerged from its chysalis. By swallowtail standards, this species is never large and this specimen was the smallest I’ve seen, leading me to believe it hadn’t been a good autumn for foraging among the stands of anise on which, as a caterpillar, it fed. Once again the trip left me with more questions than answers, like a good walk should.