It was cool and windy when my friend and I went for a walk at the Humboldt Bay Wildlife Refuge area. Large flocks of geese attested to the success of conservation efforts over recent decades. Egrets, grebes, ducks of several species, mud hens and one of my all time favorite song birds, bi-colored blackbirds put in appearances.
Along the way, I noted a small, shiny green beetle scurry across the path in front of us. Of course, I had to stop and get a better look and snap a picture. It was a ground beetle unlike any I'd seen before. At home I couldn't find it in any of my beetle ID books. I sent a photo to www.BugGuide.net and got a prompt response that this was a beetle of the genus Poecilus. I haven't been able to find much information on them so I assume they are either poorly known or their history is pretty much that of other ground beetles. Most likely it is an under-the-rocks predator. 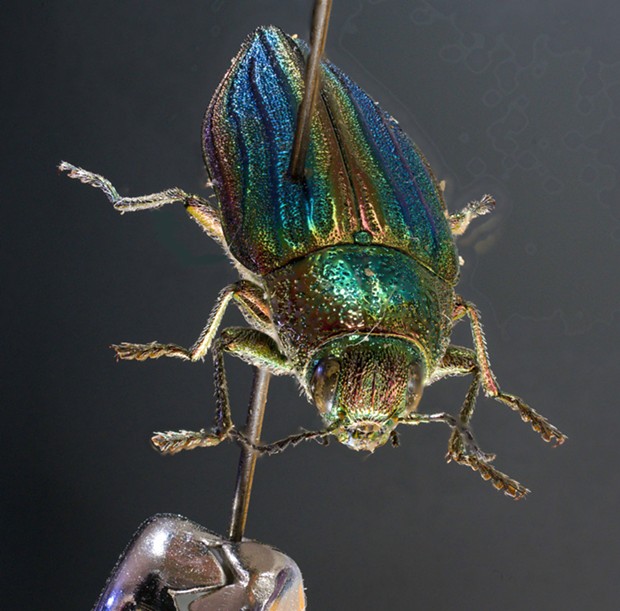 Like many photographers I suffer from gadget-itis and I'd just scratched the itch by buying a StackRail — a computer controlled, motorized, camera positioning device that advances the camera between exposures. Taking a great many photos at slightly different distances allows a computer program to “stack” the images into a single photo in which the entire length of the subject can be in focus. As my first subject, I chose a golden bupesprid beetle from my 30-year-old collection. The one photo represents 133 two-second-long exposures spaced along the subject's ¾-inch length.

My second attempt was a tick, reminding everyone that they're out now, waiting on blades of grass to attach themselves first to your clothes and then to you.