HumBug: Critters in the Water 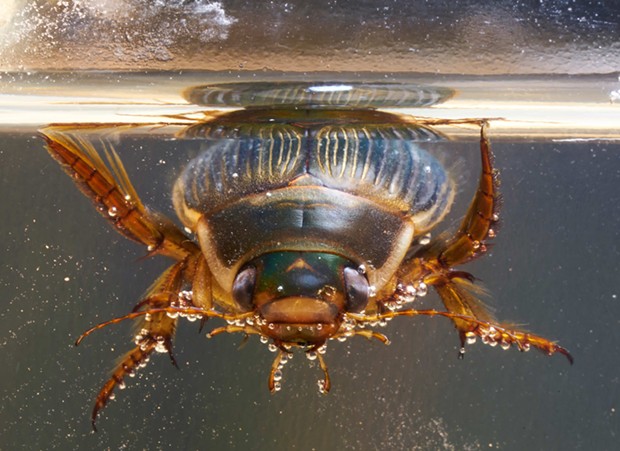 The river is low enough now to wade upstream for miles without getting in over my knees. You have to be careful because the rocks are slippery with algae. The annual blue-green algae warnings are in effect and it is suggested you keep pets from drinking the water. A small camp towel is handy to dry off once you get out to avoid “swimmer's itch.”

As the level dropped it left pools behind, stranding all sorts of organisms. This kind of puddling concentrates life into a small static place where the creatures are easier to observe, so they are a favorite of kids and amateur entomologists everywhere. While some species can leave at will, like the adult predacious diving beetles (family dytiscidae), others, like dragonfly larvae, need to hustle through their life phases if they are to sprout wings and fly away before all the water is gone.

Tadpoles need to grow legs and lungs before the water gets too warm and the decaying vegetation robs the water of oxygen. Others can estivate, digging into the mud and going dormant to endure the drying. Some finish out their life cycles laying eggs in the mud to hatch when conditions are favorable and, finally, many just die.

It is easy to get up close and personal. I carry an old empty plastic spice jar. They are clear and just about the right size to hold all but the largest aquatic insects, and they won't break in the event of a slip and fall. To hold them for photographing, I use a small plastic petri dish because they are shallow and flat. A small pocket magnifier rounds out everything I need for a fun afternoon. Oh yeah, and I take a camera so I can share my finds with friends.