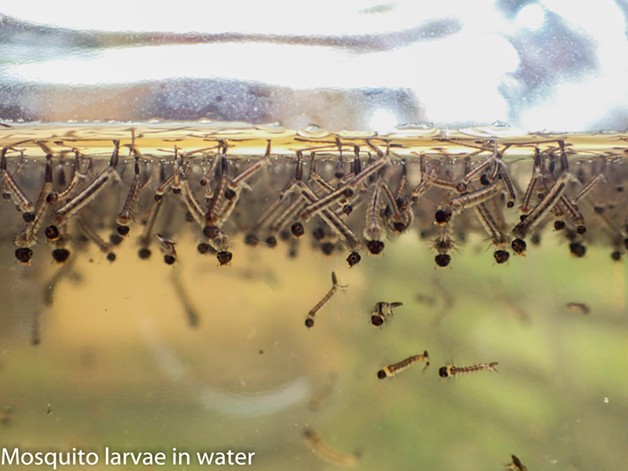 I caught a new bug recently. Unfortunately, it was not the kind I could skewer with a pin and put in a frame, but the kind where you're supposed to drink plenty of fluids and get some rest. So I took the opportunity to do a bit of online research to answer a question recently posed to me. It was regarding the occurrence of heartworm in our area.

It is commonly accepted that the parasite Dirofilaria immitis is spread by mosquitoes and is most common in the southern part of the county. Although it almost never infects humans, members of the canid family are particularly susceptible. 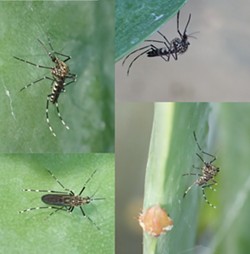 The larva are spread by mosquitoes and, once in the bloodstream, mature in the heart and associated blood vessels. It can be particularly debilitating, reducing blood flow and increasing the odds of circulatory problems like embolisms and stroke. Treatment depends on the relative toxicity of an arsenic compound killing the organisms before killing the host. It is arduous, expensive and not without significant danger to the animal since the dying parasites in the blood stream can cause as many problems dead as they do alive.

As to which species of mosquitoes can carry the disease, the Western Tree Hole Mosquito (Aedes sierrensis) which is a locally common, day-biting mosquito is a well known vector. There may be as many as a dozen other mosquito species capable of infecting our pets.

Presumably the North/South differentiation is driven by temperature, since distribution maps show higher incidences in the warmer parts of the county. If this is so, what will be the effect of climate change? As California gets warmer and drier, we can expect mosquito populations to shift, carrying their parasites with them.

As is so often the case, prevention is key. A twice-yearly treatment can effectively block infection. Preliminary lab work is essential to assure the subject is not already infected, as they can be infected for a long time before symptoms appear.

On the home front, emptying flower pot saucers, and any open container where water can collect will help keep populations down.

For further reading I suggest the three following links.