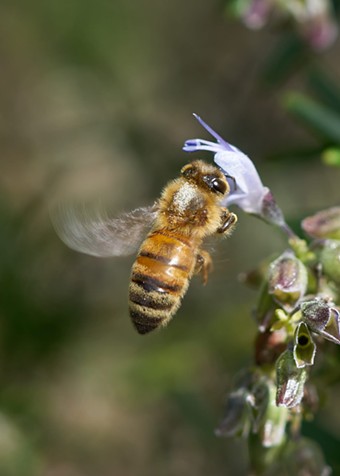 I can't say how long it's been since I first noticed many of the honeybees in my backyard appeared to have been marked. Their thoraxes looked white and dusty on top. At first I thought they might have been branded by the owner of their hive. A tiny brush near the entrance to the hive could be loaded with something to differentiate one group from another. Another thought was that they might have been treated with a miticide, to control an infestation of the dreaded varoa mite.

I asked my beekeeping friends but no one was using anything like that. The marking persisted longer than the life of the typical worker bee, so I doubted it was a leftover from some bee rancher's attempt to track his or her flock. None of the bumblebees, mining bees, carpenter bees, mason bees or long horned bees I saw carried the mark. 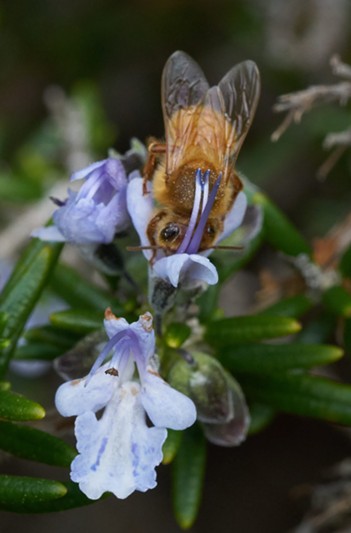 I focused on a rosemary flower I expected to be visited shortly and suddenly found myself grinning at the realization: The bees were being marked by the rosemary blossoms themselves. Rosemary flowers are constructed differently than many other flowers. The anthers and stigma are positioned arcing over the lip petal where the bee lands, giving its back a dusting of pollen when as it drinks nectar. 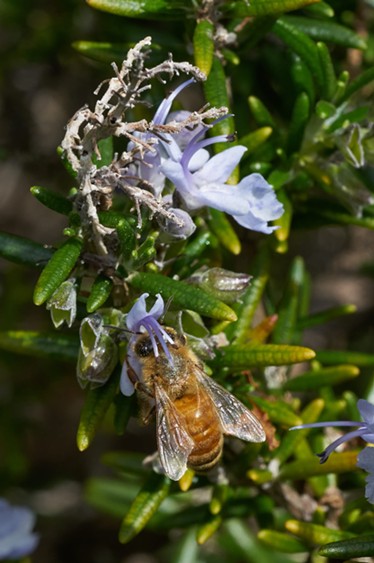 Because it is out of reach of the bee's normal grooming, it stays there and is not added into the corbiculae (pollen carrying baskets on the bee's hind legs) to be fed to the larvae. Since this pollen is placed in one of those hard to reach places — like that itch on your back you can't quite reach — it remains to pollinate the next rosemary flower.

Flowers evolved to take advantage of insect mobility to transport the protein rich pollen between each other rather than expend mass quantities as dust in a shotgun dispersal. While providing nectar to attract the honeybees the rosemary flower has adapted a more economical pollen delivery system by restricting how much of it the honeybees can eat. Many of our local wild bees have adapted to not carrying this load which is why I didn't see similar markings on them. 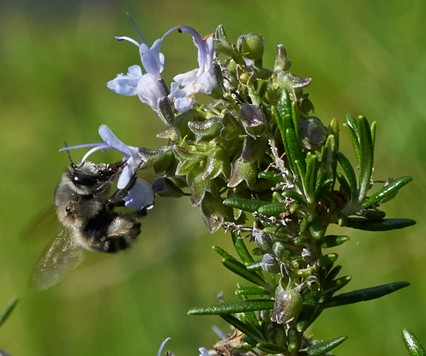