Sunday night around 11:30 when I checked the light trap in my back yard, I was amazed to find a moth with a body as large as the first two sections of my finger and narrow wings like a hummingbird. I recognized it immediately as one of the Sphinx moths, although I didn't recognize the species. It was gray, black and white. I took a lot of pictures, pestered it to climb on my hand and was taking more when the telephone rang.

Worried there might be an emergency I set the subject down and hustled inside to answer. The caller was my friend and neighbor Rabbi Naomi Steinberg. I could hear the excitement in her voice. “There is a moth over here on the porch and it has a 5-inch wingspan!”
I told her, “I'll be right over!” 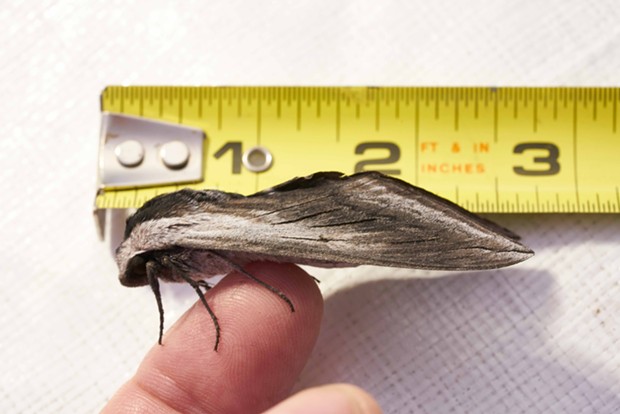 Cameras in hand, I was ready for a ceanothus moth, once locally common. I was in for a surprise. The clear wingspots on the front wings of her visitor told me this was a polyphemus moth (Antheraea polyphemus), a species I'd read about but never seen. Both the ceanothus and polyphemus are members of the family saturniidae, or giant silkworm moths, which includes some of the largest moths in the world. This one was easily as large as a small bat. They are beautiful and harmless creatures, lacking even mouthparts with which to feed. They do all their eating and growing as caterpillars, and after metamorphosing into adults they have one task only: seeking a mate to perpetuate the species. This one was a male. You can tell by the luxuriously ornate antennae that they use to follow the pheromone trail of the female. 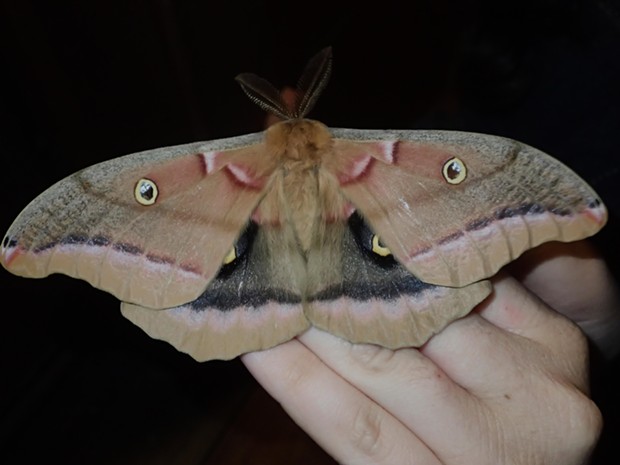 The next morning Sal Steinberg called letting me know the moth was still on their porch. I returned to get a few shots in the light of day. Naomi demonstrated how, when gently prodded, it flared its wings to display the eyespots on its hind wings. Entomologists believe this may act as an alarm response to frighten potential predators. I was concerned this specimen might have exhausted its limited energy reserves and would die there. Suddenly, it took wing and flew gracefully and rapidly disappearing into the surrounding woods to pursue its destiny. 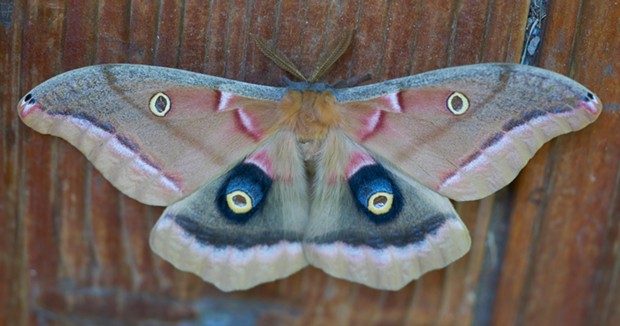 I spent some time with my moth books and online resources, and came to the conclusion the moth in my yard was the “elegant Sphinx moth” (Sphinx peregelegans). Although not closely related, these moths are both named for mythic creatures. The larvae of the Sphinx family (sphingidae) rear up striking a Sphinxlike pose when threatened. Polyphemus is the name of the cyclops blinded by Odysseus in Homer's The Odyssey because of those transparent eyespots on its wings.