HumBug: Sailors and Queens in Winter

Winter time is a slow time for bugs. Being cold blooded the chemistry of life that powers them slows down. Many of their life cycles are adapted to spending the short cold days in their sedentary forms as eggs, larvae or pupae. Those that persist as adults mostly hide through the worst of it, emerging occasionally on unseasonably warm days to the false hope of an early spring. Finding those that are active at this time can be challenging. Sometimes though, they find me.

Arranging plants in a claw foot bath tub, I noticed a small pale spider standing on the water's surface. It didn't skate like a water strider but floated going wherever the faint breeze pushed it. So I gently blew at it. It threw up a pair of legs catching the air like a sail. I repeated the experiment several times and each time, no matter which side I blew from, the little critter threw up its arms in response. I suspect they have a hard time moving about on the nearly frictionless surface and so have adapted an instinctive behavior which allows them to catch the breezes to sail about. When I reviewed the numerous photos I'd taken, I noted that in different frames it had raised different combinations of its legs, from one to four, I guess as a way of controlling its direction.

Studying my favorite spider eye chart got me to the family Philodromidae, aka running crab spiders, and following that name through BugGuide.net came to the conclusion this is a slender crab spider, genus Tibellus. It may be Tibellus californicus but I haven't found a photo on line or in any of my references yet.
As soon as I got done playing with the spider a large yellow jacket landed on the edge of the tub and commenced cleaning her antennae. If she survives the winter, she will continue on to establish a new hive and become their queen.

On the way out the door last night, my son pointed out a bug on the doorframe. Although it wasn't the common squash bug or box elder bug, its shape definitely placed it in the order hemiptera. It turns out to be a Western conifer seed bug (Leptoglossus occidentalis). A pest native to the West Coast has been exported to places as far away as Tokyo and Serbia. 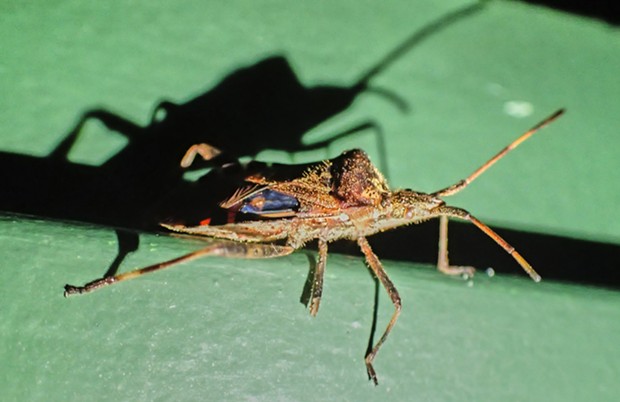