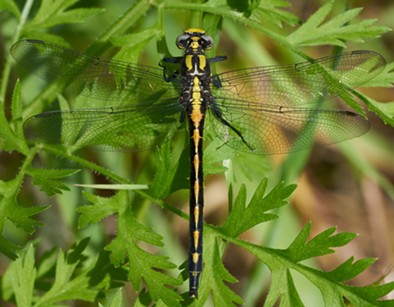 Finally, it seems spring has sprung and from the pale rattlesnake grass (Briza maxima) to the deep Crayola blue-green of the firs, the old logging road was lined with a thousand shades of green. My eye caught movement at the edge of a little clearing so I followed it. At first I thought it might be a California darner, which I've seen recently, but their time here is almost up. So I got close and there was yet another shade of green mixed with brown black on the sides of a Pacific clubtail female (Gomphus kurilis).

It is the males of the various clubtail species have a widening near the tip of their abdomen. I'm not certain there is any more reason for it than that it works and has for millions of years. This one, however, was a beautiful female specimen and, after a few false starts, I managed to collect a dozen shots of her. Finally, having accumulated all the angles and vantages I could think of, I left her alone and within about 10 feet I kicked up yet another dragonfly. It landed in the dirt and allowed me only a few decent shots before rising gently and lighting out for parts unknown. At home a careful analysis of the photo told me was is the male of the species. Along the way a brilliant yellow dandelion sported a tiny green metallic Halctid bee, aka sweat bee.
To round out the greenness for the day there were a quite few Green Bottle Flies in one area, members of the family calliphoridae — patrons of poop and putrescence. Their presence hinted at something unsavory hidden in the verdant undergrowth, since they are known to lay eggs on a corpse within hours of death the presence and level of development of their larvae are used by forensic scientists among other factors in determining time of death. 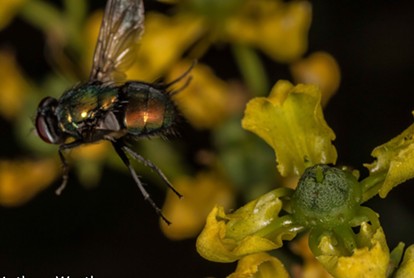