Hummie, Monster of the Bay 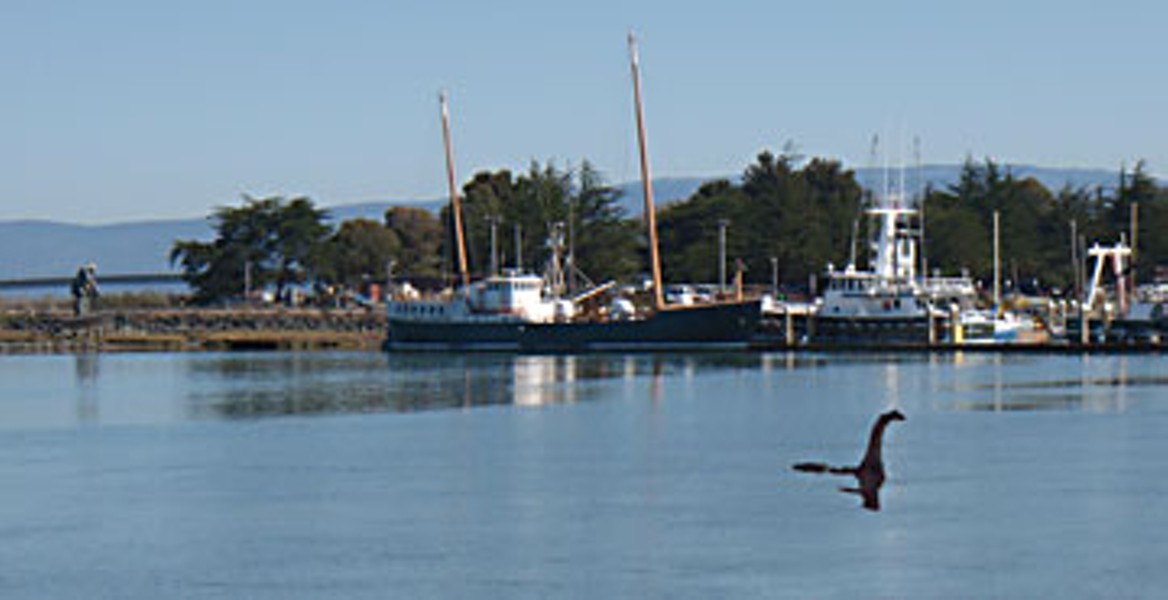 The photograph take by Evan S'Bov which (he claims) shows something very unusual in the bay.

I was about to send off this week's column (an erudite look at the curious genetic connection between Garberville gophers and Arcata aardvarks) when my visiting Russian cousin Evan S'bov rushed in. He'd been taking a last walk on the boardwalk before I was to drive him to the airport for his long flight back to Smerdaveradavoski. "You have monster in bay!" he sputtered. I assured him that we have no monsters in Humboldt Bay, just the usual assortment of seals, sea lions and the occasional lost orca.

He maintained his sputtering all the way to the airport, making for a frustrating drive. I had planned to show off my knowledge of Leo Tallstory, the celebrated Russian novelist, but instead had to put up with 30 minutes of nonsense as Evan insisted that he had seen some sort of long-necked monster in the bay. "And no one else saw this monster?" I teased him. "Was early morning, no peoples see," he replied. "Too bad," I said, thinking that perhaps he'd downed one too many glasses of Downtown Brown at Steve and Dave's Bar the night before.

Just as I was about to drop him off, he suddenly exclaimed. "Photograph, go home look!" And that was that. I remembered he'd borrowed my camera, so at home I dutifully downloaded the half dozen photos he'd taken that morning, and sure enough, the very last picture shows -- well what? Just a trick of the light, no doubt, but I'm including it with this column, just in case anyone else has a better explanation. Plesiosaurs went extinct 70 million years ago, right?

Postscript: I showed the photo to no less an authority than HSU geology professor emeritus Don Garlick, well known to readers of this column. He was hesitant at first: "Speculation may sully my reputation," he said. But enthusiasm soon overwhelmed him: "Photographs do not lie, and this photo clearly shows a Plesiosaur raising its head in Humboldt Bay. The County will finally achieve the fame it deserves and the Journal is to be congratulated on its scoop!"

I asked Dr. Garlick whether he thought any connection could be made between our creature and the Loch Ness monster. "This discovery warrants revisiting the previously discounted sightings of a similar animal in Scotland's Loch Ness," he said, "since there's no doubt, now, that the sightings of Nessie and Hummie are equally authentic."

To which this observer can only add, a similar animal? Or the same animal? Watch this column for future developments.

At 66, Barry Evans (barryevans9@yahoo.com) still appreciates the caprices of life that herald the arrival of April every year. He lives in beautiful Old Town Eureka.

CAPTION: The photograph taken by Evan S'bov which (he claims) shows something very unusual in the Bay.