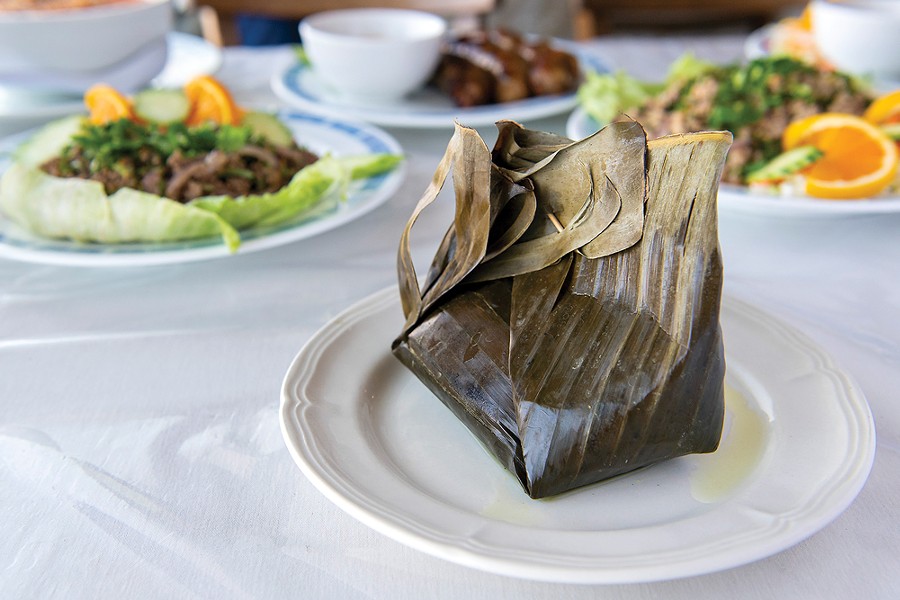 Photo by Mark McKenna Mok khai, a banana leaf stuffed with fragrant seasoned steamed ground chicken and noodles is one of the traditional Lao dishes on the new menu at Hunan Restaurant. 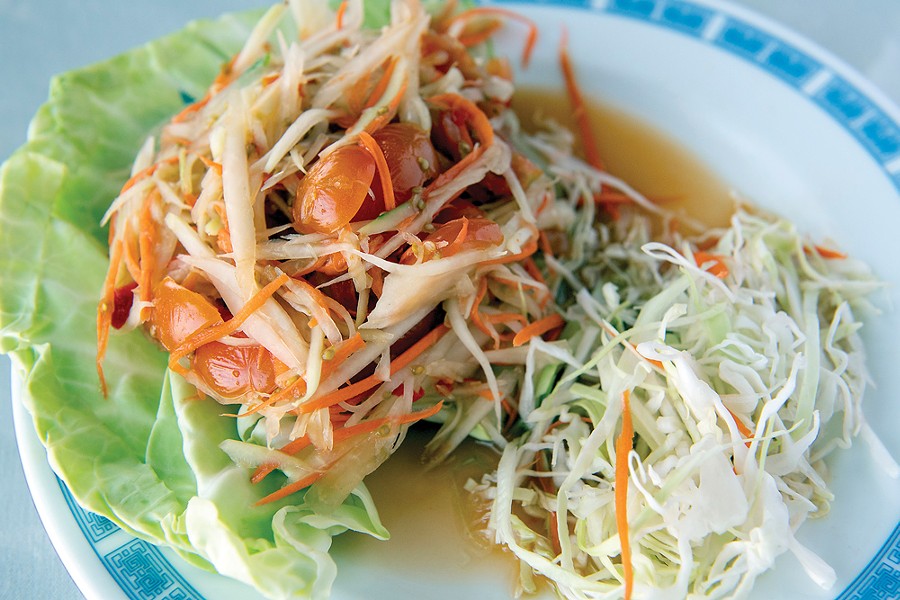 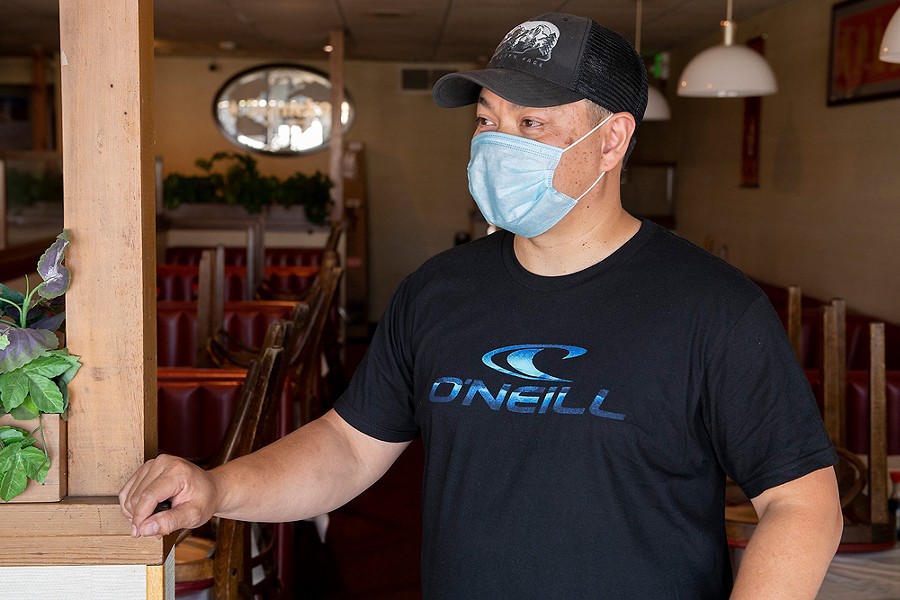 Photo by Mark McKenna Chef and owner Ronnie Worasen has adapted to COVID-19 protocols at Hunan. 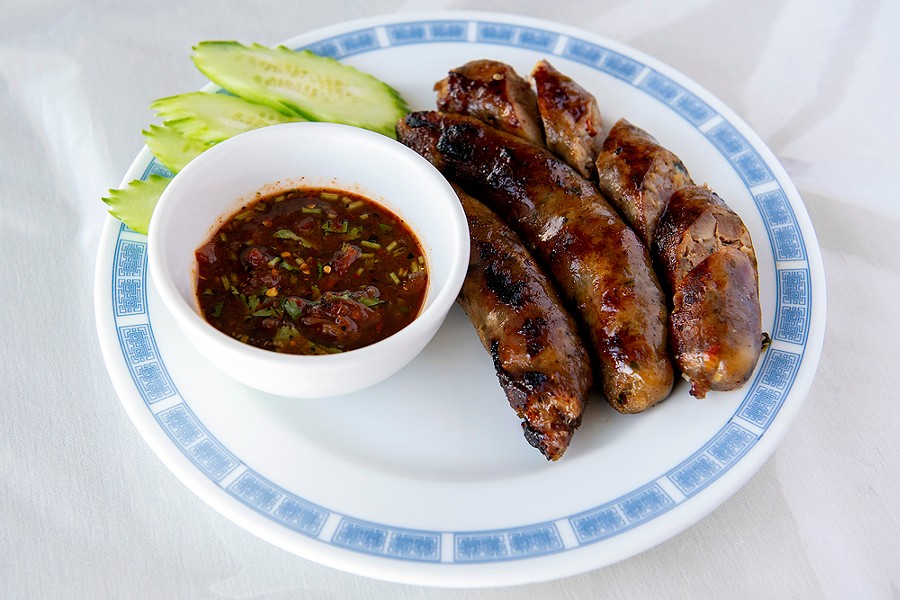 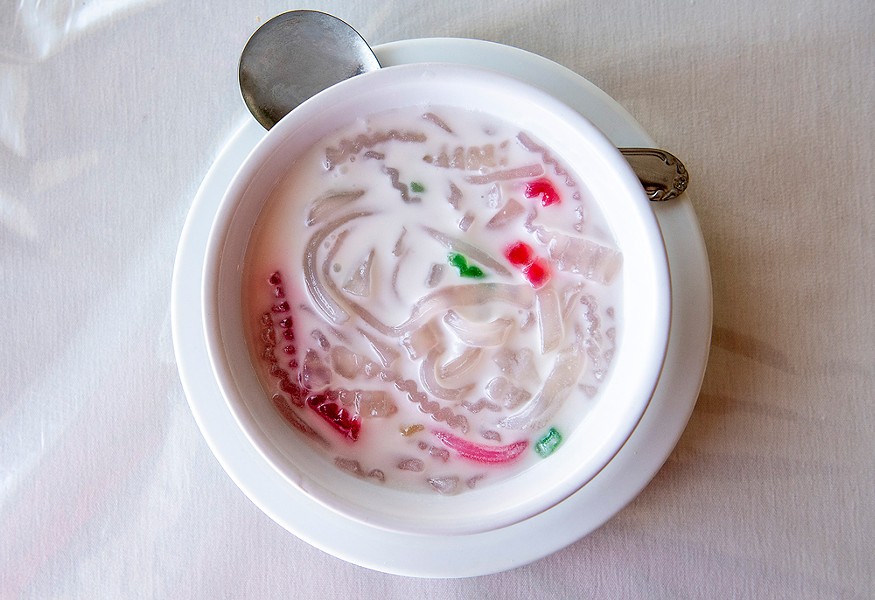 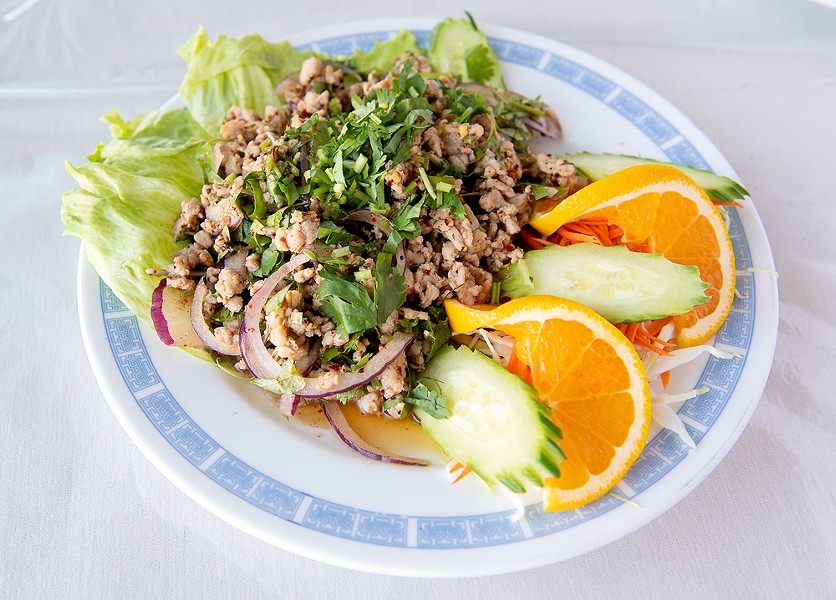 Back in January, Ronnie Worasen was walking through the empty kitchen of Hunan Restaurant (2912 E St., Eureka), rattling off the changes he was planning, from painting the dining room to updating the menu. Behind him, his father John Worasen was shaking a blackened wok over a flame, testing out the dishes they'd be serving when Ronnie officially took the place over from then owner Qing Shi Li in a couple of days.

The Worasens have been working in Humboldt restaurants for decades but Hunan Restaurant will be their first shot running their own. It'll also be the first time they're cooking Lao family recipes, which Ronnie Worasen is slowly adding to the classic Chinese menu. Shelter in place meant nixing the dining room makeover and instead installing a Plexiglas screen at the register, as well as shifting to the takeout only. But as he navigates a kind of prolonged soft opening, he's staying flexible and patient.

John and Maryann Worasen fled Laos as refugees and immigrated to Texas, where Ronnie was born. When Ronnie was 9, the family came to Eureka, where John worked in restaurant kitchens. Once he graduated from Eureka High School, Ronnie followed in his footsteps, heading to work alongside him at Hunan Plaza in Arcata for three years, first busing, then working prep and eventually becoming a line cook. He says it was rough at first but his dad showed him the ropes.

"My dad and a lot of my previous bosses say that you can give two cooks the same ingredients and it'll come out differently," says Ronnie Worasen, who continued his training for eight years at Yen Ching in Eureka, a brief detour into Japanese cooking at Tomo and Alice's Steak and Sushi. He cooked at the Henderson Center Hunan Restaurant for three years before spending another three at Siam Orchid.

"Honestly I would stay there still but I've been trying to get my own place forever and, after 17 years working under other people, it's finally paid off," he said. "Everybody I've worked for I've been there as much or more than the owners ... I'd rather just do it for myself."

Arcata's now defunct Hunan Plaza was unrelated to Hunan Restaurant in Eureka (and only nominally Hunan Province) but the nostalgia is not lost on Ronnie Worasen. He recalls how busy the place always was, as well as how the Eureka restaurant had flagged in recent years, and hopes to "bring that sauce that used to be on the plaza over here." The menu was standard Chinese restaurant cooking in America — chow mein, Szechuan beef, kung pao chicken — but the sauce, he says, was the thing. It'll be a bit of a trip down memory lane for Ronnie Worasen and his father, a veteran of that kitchen who'll be helping with prep and sauces.

"It's going to be a family business," says Ronnie Worasen. Maryann will help out, too, when she's not looking after her three grandkids — soon to be four when Ronnie's fiancé and baby are able to immigrate. Ronnie Worasen was visiting Laos with his fiancé Kommaly Phommatham for the birth of their son when Li called him about buying the restaurant. Immigration had approved their application to come to the U.S., and they were hoping to come by summer. But the embassy closed before her April interview appointment and now the timeline is up in the air.

In the meantime, he's working slowly adding Lao dishes to the menu. "That's one thing I thought about — I was trying to put something out there that no one has." His parents suggested Lao dishes. Despite the presence of a local Lao community and Lao cooks in local kitchens, Humboldt hasn't had a restaurant offering the Southeast Asian cuisine since Eureka's Hue closed a few years ago.

Some of that may come down to the difficulty of getting ingredients like fresh sausages and herbs. "I went back to Laos and everything I ate there was straight from a garden or straight from the ocean," says Ronnie Worasen, adding, "We're not really a spicy type region." Instead, he says, the cuisine is a balance of sweet, spicy and sour flavors. That distinction is evident in some dishes that cross over with Thai cuisine, like papaya salad and the minced meat salad larb, both of which demonstrate a lighter touch in terms of sugar and lime in the Lao iteration, allowing the scallions, cilantro and other fresh herbs into the spotlight. "Thai food originated from Lao food," Ronnie Worasen says.

Like most of the Lao menu, the larb is his mother's recipe, one she's served her family countless times, though she waves a hand and demures when he says so. "If somebody says [it's] 'good,' I'm happy," she says.

Other dishes are found nowhere in the county outside of private homes and the Lao community's annual New Year potluck. A deep orange red bowl of khao poon — rice noodles in coconut curry soup fragrant with chiles, Kaffir lime leaves, lemongrass and galanga, topped with chicken shredded to melting — is wholly satisfying and not as hot as its color warns. A cool bowl of nam van, sweet coconut milk with strands and beads of tapioca, follows it well.

A plate of grilled herby sai oua pork sausage offers snappy casings, chewy slivers of skin made even more flavorful with a swipe in the spicy tomato dipping sauce. Mok khai, minced chicken and firm mung bean noodles with ginger and lemongrass steamed in banana leaf, comes with a little basket of khao niao, the sticky rice that is central to Lao food culture. "My dad," says Ronnie Worasen, "he tried eating steamed rice with some meals but he says it never fills him up."

So far, the reception has been strong, both for the revamped Chinese dishes and the Lao dishes. "Since we started posting Lao food [on Facebook], there are some days when we're selling more Lao food than Chinese," says Ronnie Worasen, who's pleasantly surprised at the open palates of non-Laotian customers. Asked if the cuisines go together, he gives a short laugh.

Ronnie Worasen is happy to accommodate.