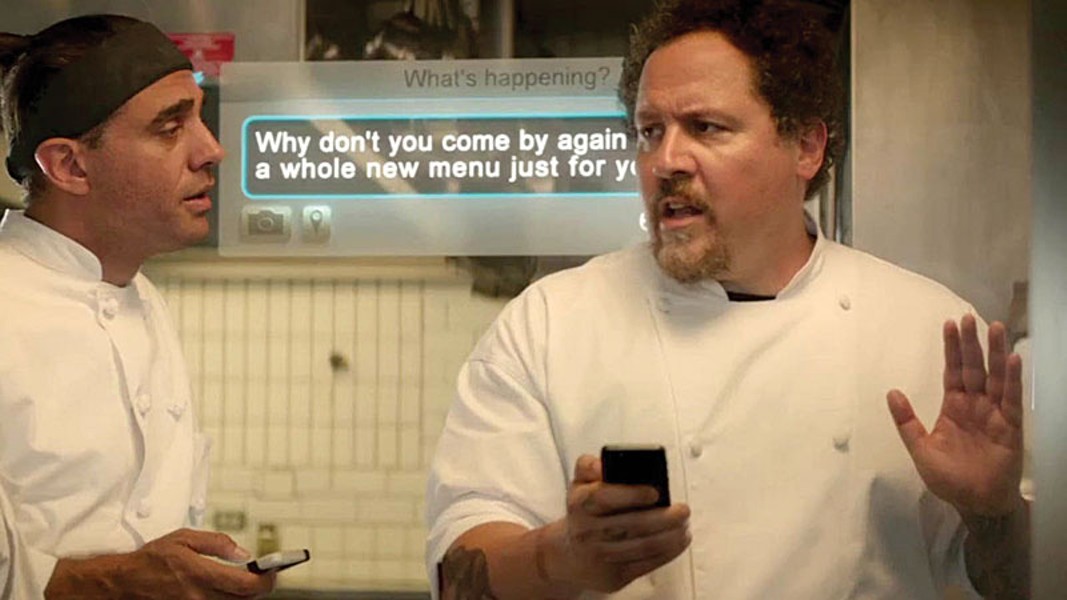 I am not introducing you to Iron Man.

CHEF. I will say, with no reservations (sorry), that I enjoyed this more than any movie this year. There've been bolder statements, as 2014 hasn't exactly been a banner year so far. But for me, Chef lives in the rarefied air of legitimately great mainstream American cinema. It's not a crazy tone poem, an oblique meditation on death or a confrontational exercise in style; it is a good story, exceedingly well told, with a warmth and fullness that, mishandled, might spell doom. Thanks to writer/director/star Jon Favreau, though, the movie's big-heartedness is tempered with cynicism and snark to avoid feeling cloying or trite. Just as he was able to find the humor and humanity in organized crime in Made (2001), Favreau sees past the tattoos, tequila and tough talk of chef culture to get at some of the essential truths, good and bad, that unify us.

When he started out in Miami, chef Carl Casper (Favreau) was one of the rising stars of the culinary scene, some kind of rebel savant. Now, a decade later in Los Angeles, real life has drained some of his juice. He's head chef at a successful French place, sure, but he's getting dangerously bored cooking the same menu every night. The job still takes up most of his waking hours, including time that would be better spent bonding with his young son Percy (Emjay Anthony) or mending fences with ex-wife Inez (Sofia Vergara). When Carl learns that a prominent food blogger will be reviewing the restaurant, it renews his enthusiasm for the work. He pours himself into a special menu, only to be talked out of it by his tyrannically profit-minded boss Riva (Dustin Hoffman). A negative review follows, which in turn sends Carl into a tailspin of Twitter reprisal and terrible, hilarious face-to-face confrontation. None of which escapes the ever-vigilant eye of the Internet at large. Jobless and notorious, he can't get anybody except Inez's weird publicist to return his calls. So he accepts his ex-wife's invitation to join her and Percy on a trip to Miami, where she sneakily turns him into a food-truck owner, reintroducing him both to his son and to his love of cooking.

Chef is equal parts romance, comedy, road movie and kitchen verité, and for me every element of it works. Favreau's Carl is utterly believable as a remarkable talent stymied by the expectations and safety of routine. Anthony gives an impressively subtle performance as a son desperate to spend time with his dad, but too smart and mature to give in to fits of anger or sadness. It's no small thing to pull off, and a testament to both actor and director that a 10-year-old should acquit himself so well. (It helps to act in a movie packed with top-notch performers doing remarkable work — Scarlett Johansson, Robert Downey Jr., Bobby Cannavale and John Leguizamo appear in roles of varying size but uniform quality.)

Chef manages to speak to a moment in contemporary culture with a light enough touch that it doesn't feel like pandering now, and likely won't feel dated later. Favreau takes on social media both as an identifier of the generation gap and as a vital element of modern life. But he does it so deftly that it feels completely natural, completely authentic. He lends the same attention to the details of kitchen culture and cooking technique: The movie is seasoned liberally (sorry again) with gorgeous food preparation sequences and hilarious behind-the-scenes restaurant insights that add depth and nuance. Their addition produces something truly special. R. 115m.

EDGE OF TOMORROW. Tom Cruise and Emily Blunt star as future soldiers, waging a war against vaguely arachnoid aliens with a shared consciousness. For some reason, he's stuck in a time loop that the pair learns to manipulate for the good of humanity.

Both leads give compelling performances, and some of the battle sequences are exciting, but the direction is too focused on slickness and largesse, not enough on character or story. And even though the premise is undeniably clever, I think the writers are a little too proud of their creation for its own good. The resulting narrative is irretrievably muddled, and the movie as a whole is expensive-looking, competently made and also totally forgettable. PG13. 113m.

THE FAULT IN OUR STARS. At least one young woman in the audience brought a whole box of tissues in to the theater with her. She planned well; by the end credits, the crowd (mostly female, mostly under 25) was all sniffles and sobs. Even if one doesn't fit the target demographic, The Fault In Our Stars may still draw forth some tears.

Hazel Grace Lancaster (Shailene Woodley) has terminal cancer, a withering wit and a misguided assumption that boys don't like her. Augustus Waters (Ansel Elgort), a cancer survivor, handsome and a real nerd, sees it as his duty to disabuse her of that notion. Together they navigate love, death and eventually the canals of Amsterdam.

At my wife's urging, I read John Green's book, upon which this is based. It struck me as well crafted, if a little indulgent in terms of nerdly writer wish fulfillment. Even though the movie retains that tenor, the strength of the lead performances and the goodness shooting through it won over even me. PG13. 126m.

HOW TO TRAIN YOUR DRAGON 2. Hiccup, his dragon pal and a village full of Vikings with Scottish accents return in the sequel. PG. 102m.

IDA. A young woman about to become a nun delves into her true identity and her family's history during the Holocaust. PG13. 80m.

PALO ALTO. A moody drama from another Coppola (Gia this time) has lonely teenage girls and boys longing for affection and doing reckless things. R. 100m.

GODZILLA. The big guy returns with puny, human co-stars Aaron Taylor-Johnson and Ken Watanabe. The effects impress, but there's too much going on to focus on the lizard and its destructive glory. PG13. 123m.

MALEFICENT. An atmospheric, good-looking fantasy with a sharpened Angelina Jolie as the fairytale party crasher from Sleeping Beauty. Heavy on CGI, light on character and not quite scary enough. PG. 98m.

A MILLION WAYS TO DIE IN THE WEST. And none of them live up to the MacFarlane brand or the rest of the top-shelf cast (Charlize Theron, Liam Neeson and Neil Patrick Harris) in this Western comedy. R. 116m.

NEIGHBORS. Suburban parents (Rose Byrne and Seth Rogen) go to war with the frat next door and their oft-shirtless prankster leader (Zac Efron) in this crude but effective comedy R. 97m.

X-MEN: DAYS OF FUTURE PAST. The mutants go time traveling to save the world. Pacing and exposition are rocky, but the action and the cast make an enjoyable distraction. PG13. 131m.