I Have Seen Cloverfield

The monster was more sympathetic than the bland 20-somethings 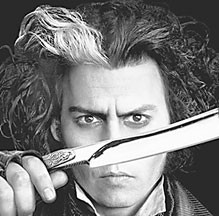 There's more blood, a spoof, a never-say die Stallone and Diane Lane versus a serial killer coming up this Friday, Jan. 25. The Oscar multiple-nominated There Will Be Blood stars Daniel Day Lewis as a turn-of-the-century oil baron who brooks no competition. The film is directed by Paul Thomas Anderson (Magnolia) from a script adapted from an Upton Sinclair novel. Rated R for some violence. 168 m. At the Broadway.

What is there to say about Rambo? Stallone is not going to go quietly into that gentle night, and here he gives us the fourth iteration of John Rambo some 12 years after the previous film. Rated R for strong graphic bloody violence, sexual assaults, grisly images and language. 103 m. At the Broadway and Mill Creek.

Untraceable stars the always-fascinating Diane Lane as an FBI agent trying to trace a serial killer who posts his victims on an untraceable website. Then the nasty person gets personal. Shades of Silence of the Lambs? Rated R for grisly violence and torture, and some language. 110 m. At the Broadway and Mill Creek.

Meet the Spartans appears to be a spoof of 300. Funny, I thought the original was a spoof. Rated PG-13 for crude and sexual content throughout, language and some comic violence. 94 m. At the Broadway, Mill Creek and Fortuna.

Steep is a documentary about extreme skiing from its early history to the present. Rated PG for extreme sports action and brief language. 102 m. At the Minor.

A high school student has to leave her private school and return to her drug-infested neighborhood, where she becomes involved in competitive step dancing in How She Move. Rated PG-13 for some drug content, suggestive material and language. 108 m. At The Movies.

Concluding the Bette Davis series at the Eureka Library is All About Eve, a film about show business released in 1951. Starting at 6:30 p.m., Tuesday, Jan. 29, the program will be hosted by Philip Wright.

The Humboldt branch of the Women's International League for Peace & Freedom will screen Breaking Ranks, a documentary about U.S. soldiers currently seeking refuge in Canada, on Monday, Jan. 28 at 7 p.m. in the Arcata Library Conference Room.

27 DRESSES: As it turns out, 27 Dresses was a bit of a revelation. As I sat there watching this dreary, formulaic romantic comedy, it occurred to me that the studios might have a solution to their writers strike woes, at least for this ever-popular genre. They just have to find actors willing to cross the picket line, and they don't have to be that good if at least one of them is winsome and attractive (preferably a woman). The script is readily available by simply cutting and pasting scenes from the countless dreary, formulaic romantic comedies that have already been produced and paid for. A computer operator with access to a script database can get the writing credit, and he or she probably comes cheap.

In the latest iteration of what passes for romantic in Hollywood, Katherine Heigl (Grey's Anatomy; Knocked Up)is not-so-plain Jane in the always-a-bridesmaid sub-variation of the genre. Having already accumulated 27 bridesmaid dresses in her over-stuffed closet, Jane reluctantly agrees to plan the wedding of her spoiled sister Tess (an uninventive Malin Akerman) to her boss George (Edward Burns, recently in One Missed Call) even though Jane pines for George herself.

There is another guy in the picture, wedding-writer-aspiring-to-more-meaningful-assignments Kevin (James Marsdan, the Prince in Enchanted), but Jane just can't see past George to the guy she's supposed to be with. Will it work out? The answer to that obvious question is as high as this film aspires.

There is one very good performance: Judy Greer (American Dreamz) as Jane's best friend, Casey, steals every scene she's in, and happily that's quite a few. Heigl seems to have genuine comic talent; too bad her material is such a letdown. Will Hollywood ever let romance grow up? Rated PG-13 for language, some innuendo and sexuality. 117 m. At the Broadway, Mill Creek and Fortuna.

SWEENEY TODD:The film musical has been making a comeback in the new century after languishing for much of the '90s. Broadway shows such as Chicago, Rent, Phantom of the Opera and The Producers have been adapted for film, as well as more offbeat fare such as Dancer in the Dark and Across the Universe.

In terms of commercial musicals, I have always enjoyed the darker ones of Stephen Sondheim (Company; Into the Woods, Assassins etc.) the most. None are darker than the film noir, horror fest Sweeney Todd. Add director Tim Burton to the mix, and you've got my sort of film musical.

This Sweeney Todd is relentlessly pessimistic about human nature in general; there are no saving graces in this universe. From my perspective, this is Burton's best film to date and he has an ideal cast to fulfill his and Sondheim's vision. A glowering, singing Johnny Depp is the "demon barber" of the title and the always-fascinating Helena Bonham Carter is his meat pie baking landlady/partner; it's a relationship consecrated in hell.

The story is simple. Todd returns to London to seek revenge on a judge who wrongfully convicted him in order to steal his wife, and who still has his daughter locked away awaiting despoliation. That his revenge involves throats being slit by razors and cannibalism seems somehow just in this black world.

The whole cast, including Sacha Baron Cohen as a rival barber, is solid, but Depp and Carter are particularly effective. The film is much more graphic in its depiction of violence than a stage production generally is, but it's a complete, if perverse, joy to behold. Depp's voice works in this particular piece, but I hope he doesn't contemplate giving up his day job. If you don't like violence, skip this film. If, like me, you detest the pablum of Andrew Lloyd Webber, this might be your treat. Rated R for graphic bloody violence. 125 m. At the Broadway and Mill Creek.

MAD MONEY: Despite a cast that includes Diane Keaton, I went to this film with lowered expectations. Happily, I was pleasantly surprised by an entertaining if slight caper film. Much of my enjoyment stemmed from watching the delightful Keaton at work, but the caper plot is also mostly satisfying.

The story is about three economically depressed women who work at the Federal Reserve Bank in Kansas City, MO, Keaton is Bridget, whose husband, Don (an amiable Ted Danson), has been downsized, leaving the couple with a quarter-million dollar debt. Having no skills, the only job she can find is as a janitor at the Federal Reserve.

Her partners in crime are Nina (Queen Latifah), a single mother trying to raise two children on a shoestring and Jackie (a relentlessly cute Katie Holmes), who lives in a trailer with her husband Bob (bland Adam Rothenberg), a meat packing plant employee. Every day, all three watch thousands of dollars of used up money being shredded. What's a money-challenged woman to do?

Bridget is the brains behind the subsequent plan to siphon off some of money, and the plot is carried off with the usual comic and tense moments typical of the genre. Directed by Callie Khouri (writer for Thelma and Louise; Divine Secrets of the Ya-Ya Sisterhood) from a script adapted from the British TV film Hot Money, the story is told primarily in flashback, a device that allows for the usual caper film ending twist. Rated PG-13 for sexual material and language, and brief drug references. 114 m. At the Broadway, Mill Creek and Fortuna.

CLOVERFIELD: The thought of 80-plus minutes of handheld camera work in the service of a science fiction end-of-Manhattan thriller made me a little nervous. Plus, I thought Manhattan had already been destroyed recently in I Am Legend. But, resilient island that it is, Manhattan has sprung back to life yet again to be savaged by the latest monster in the surprisingly effective Cloverfield.

Although the film has plenty of special effects and CGI, it is effective because the focus stays almost entirely on the group of young people from whose point-of-view the story is told. Perhaps this is due to the influence of co-producer J.J. Abrams, who is responsible for the TV series Alias and Lost.

The story follows a group of young men and women who are throwing a farewell party for one of their own in Lower Manhattan when the city is attacked by some gigantic monster and its vicious smaller offshoots, whose bites are fatal. The film revolves around their attempt to survive. As one of the group had the job of videotaping the party, the whole film is told from that perspective; thus the handheld camera concept that we've seen before, especially in The Blair Witch Project. As few of the group of self-absorbed people at the center of the film are particularly likeable, I found myself feeling some sympathy for the dimly seen monster.

Over half the audience at the screening I attended stuck around for the end credits, clearly expecting a surprise. Well, there is a brief sound addendum at the end but you'll have to sit through the lengthy credits yourself to see if it's worth the wait. Rated PG-13 for violence, terror and disturbing images. 94 m. At the Broadway, Mill Creek and Fortuna.

ALVIN AND THE CHIPMUNKS.Based on the 1950s cartoon series about chipmunks Alvin, Simon and Theodore, who sing in three-part harmony. Rated PG. 91 m. At The Movies.

ATONEMENT.Dramatic British tale set in 1935, of deceit and love, of wealth and privilege, based on novel by Ian McEwan. Rated R. 123 m. At the Broadway.

BUCKET LIST.A corporate billionaire and a working class mechanic, who have developed a strong bond while sharing a hospital room, embark on the road trip of a lifetime. Rated PG-13. 97 m. At the Broadway, Mill Creek and Fortuna.

GREAT DEBATERS.A brilliant but volatile debate team coach at an all-black college in the Jim Crow South molds a group of underdog students into an elite debate team. Rated PG-13. 127 m. At the Minor.

I AM LEGEND.Robert Neville, a brilliant scientist, is the one man left alive after a terrible, manmade virus sweeps New York City. But he is not alone. Rated PG-13. 114 m. At The Movies.

JUNO.An intelligent teen, Juno, deals with the consequences of an unplanned pregnancy by seeking out the perfect set of parents to adopt her unborn child. Rated PG-13. 96 m. At the Broadway, Mill Creek and Fortuna.

KITE RUNNER.Epic tale of fathers and sons, of friendship and betrayal, that spans from the final days of Afghanistan's monarchy to the atrocities of the Taliban regime. Rated PG-13. 127 m. At the Minor.

NATIONAL TREASURE: BOOK OF SECRETS.A man, Ben, follows an international chain of clues to prove his great-grandfather's innocence when a page from the diary of John Wilkes Booth surfaces implicating Ben's ancestor in Abraham Lincoln's death. Rated PG. 124 m. At the Broadway and Fortuna.

NO COUNTRY FOR OLD MEN.Coen Brothers' adaptation of Pulitzer Prize-winning novel by Cormac McCarthy touches on themes as varied as the Bible and this morning's headlines. Rated R. 123 m. At The Movies and the Minor.

PIRATES WHO DON'T DO ANYTHING: A VEGGIE TALES MOVIE.Animated veggie pals rescue a royal family from an evil tyrant and themselves from living the life of common couch potatoes. Rated G. 85 m. At The Movies.

P.S. I LOVE YOU.A beautiful, smart woman loses the love of her life and then clings to his letters he wrote to help guide her through both her grief and her new future. Rated PG-13. At The Movies.

WATER HORSE: LEGEND OF THE DEEP.A young boy finds an enchanted egg, which holds the amazing, mythical creature of Scottish lore, the "water horse." Rated PG. 112 m. At The Movies.