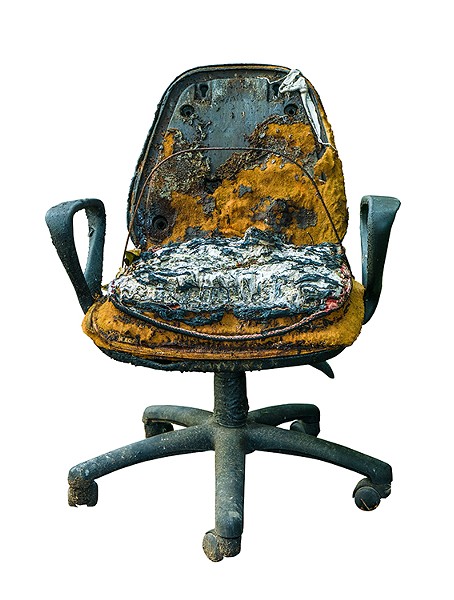 This happened at my former employer and only now, years later, do I feel like I can speak about it. I'm not making excuses and I still take full responsibility for what happened, but it's important that you know we truly were out of paperclips.

"Ken," I typed in an email to our supply manager, "Please order more paperclips. Thanks." And there it was. Right where a cheerful exclamation point should have been — providing that jumpy ending that sends an apologetic grin and shrug so my disembodied female voice can sound as non-threatening as possible. Now that Comic Sans has been outlawed, an exclamation point is the only way to convey that, despite the wage gap, being passed over for advancement and Carl's weird staring, I'm fine, fine, fine! I'm happy! It's also the only way the person reading my email would know I have breasts.

Instead, a period. Like that one! So final, brooking no debate over our stock of paperclips or whether I could just staple documents instead — or better yet hold them pinched together with my fingers — the way an ellipsis might have ... See! So soothing in its ambiguity, rounding out opinions or statements of aggressive factuality, like, I dunno ...

I stared at the nihilistic black dot and the flickering cursor. My finger moved over the mouse as if by its own will and then, without thinking, I hit send. It was like I was being controlled by some unseen force that seemed to be coming from my brain. Or my spine.

Obviously, I wanted to take it back.

Maybe it would be OK. Maybe nobody would notice. They didn't notice when June, the head of marketing, miraculously conjured muffins and coffee enough for the team from her briefcase at last week's meeting, or that I spent the entire PowerPoint presentation stabbing my thigh with a mechanical pencil trying to feel alive.

I looked back at the message. It was even worse than I thought. Where was the "Hey," or the "I was just thinking," to let Ken know that my basic supply needs are no big deal? What about "whenever you get to it, no rush?" I could have at least apologized for needing something in order to do my job. After all, I'm here to be part of a team/family, not to further my professional ambitions or draw a paycheck. Jesus, couldn't I have tossed in a smiley emoji or whatever that sideways face is when you put a semicolon and a capital P? In the harsh light of my monitor, this message was a clear declaration of war. The period glowed black like a bitchy cannonball.

The gravity of what I had done swept over me just as the smell of smoke made its way down the hall. Predictably, Ken had opened the email, seen the period and burst into a column of flames like a straw man with a carpal tunnel brace. The whoosh drew Carol into his office, where she gasped at Ken's remains, a Pompeii-like husk of ash perched on an ergonomic desk chair, and peered at the email on the screen. Now, I don't want to speculate but investigators theorized that while flailing in the conflagration caused by my blunt and off-puttingly masculine email, Carol's hand must have smacked into the mouse just so and forwarded the message to the entire staff. Looking back, though, others who knew Carol said they saw a certain darkness in her.

Whether by fate or Carol's final act of misanthropic wrath, the email spread and with it, flames and death. I was at least grateful I had copies of Lean In and Ivanka Trump's Women Who Work to press against my ears and muffle the screams. Could I have saved them? I've often wondered. Perhaps. I could have thrown myself in front of Carol if I'd been quick enough but, honestly, getting up and down from a posture ball is not as easy as it looks despite what it's done for my core. And I did try to warn the rest of the staff, gently calling out from my desk, "Oh, hey, guys, sorry, killer email in your inboxes, so, if you don't mind, please don't open it, 'kay? Or, just whatever you think! Thanks so much!" But it just took too long and I'm not sure how many of them even heard me. I didn't want to raise my voice. I'm told it's shrill.

Jennifer Fumiko Cahill is the arts and features editor at the Journal. Reach her at 442-1400, extension 320, or Jennifer@northcoastjournal.com Follow her on Twitter @JFumikoCahill.