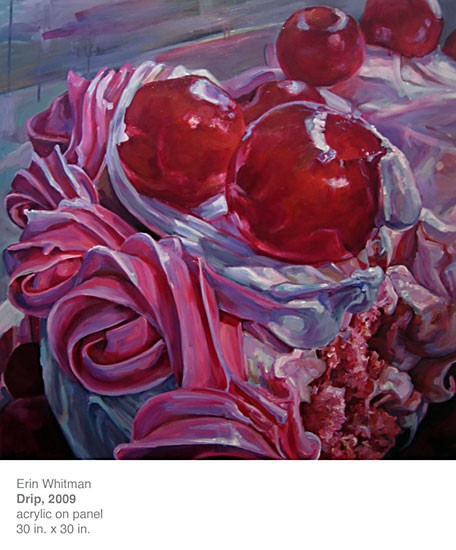 "But why is a big blue dot on a big white canvas an important enough painting to hang in a museum?"

I asked the professor this during a Los Angeles County Museum of Art field trip years ago. My husband was enrolled in art history. I'd tagged along for fun. We stood in front of an exhibit featuring several door-sized canvases left white except for tire-sized circles of color, one spot per canvas. Was it soothing? Somewhat. Was it art? Apparently. But I couldn't see it. Fortunately, the woman leading our field trip knew her stuff. She explained the context, how the simplicity of design spoke powerfully against the gaudiness of the times, how it illustrated a rebellious reclamation of art's meaning. Much like punk did for rock, the artist had wrenched Art away from the bloated Elite and delivered it back into the hands of the common People.

Given the historical framework, the inclusion of the paintings in one of the city's premier institutions made sense. Without the background, however, do the paintings still qualify as brilliant? If art is done solely in rebellion, once the revolution is complete, does its worth remain? Likewise, if an artist trades in shock value, what happens when the work ceases to scandalize? Do paintings, sculptures, sketches, photos, music, films need to stand on their own once all external meaning is stripped away?

Before sexual material can be judged obscene and therefore unprotected by the First Amendment, a judge or jury must determine: 1. That the average person, applying contemporary community standards, would find that the work, taken as a whole, appeals to prurient interest; 2. That the work depicts or describes, in a patently offensive way, sexual conduct specifically defined by the applicable law; and 3. That the work, taken as a whole, lacks serious literary, artistic, political and scientific value.

I'm pretty sure a badly done painting of genitalia is still a badly done painting, but some artists -- and here's when the shock value debate comes into play -- equate provocation with talent. And get offended when one disagrees. ("Clearly, you're a prude," they say. "Obviously you don't understand art.")

Fortunately, other artists use the theme to push their work in a new direction or apply their skills to "erotica" as diligently as if the assignment was "apples" or "motorbikes." One of the better examples of the former I discovered post-Arts Alive!, while doing research for this column. Victor "Vico" Hernandez wrote about his piece (no pun intended) on his blog:

"I chose to do a nude self portrait because I wanted to challenge myself. My first thought was to make a ‘Provocative' scene with some beautiful T & A. I even had a hot photo reference lined up... but after much internal debate I realized that doing a nude self portrait is a step that must be overcome/achieved by most artists in their lifetime. So instead of doing some gratuitous sex scene, I decided to do a much more introspective piece."

In this case, knowing the context makes an already interesting work even more so. And by making himself the subject, Hernandez is very aware of keeping to the ideal of creating art, rather than attempting to titillate the viewer.

As for an established artist going a bit more risqué -- emphasis on "a bit" -- check out Rachel Schlueter's piece, "Love Shack." One expects exceptional work whenever Rachel's signature adorns a painting, and "Love Shack" demonstrates exactly that. Reminiscent in execution of Robert Henri's Ashcan School-style, her painting spells out a clear narrative. We have the faceless customer, his posture confident down to his fancy pink socks. He thinks of himself as a big-shot, cigarette dangling between his fingers. The bright paint strokes and curl of smoke support the heat of the woman -- she's all curves and smoldering. Gorgeous.

Alas, captivated by the Body Erotica show, I failed to make it over to First Street Gallery, where Animalia Alumna Artisfabricus features work by nine Humboldt State University alumni artists including paintings of Erin Whitman. Even as a thumbnail on First Street's web page, her piece "Drip" causes a catch of the breath with its rich colors and luscious twists. "Drip" engages the senses, is as sensual as any piece at the Accident Gallery, and serves as a reminder of how great art invokes a visceral reaction as well as intellectual, whether in the heart, stomach or regions south.

The Animalia Alumna Artisfabricus exhibit runs through Sept. 12, at the First Street Gallery, 422 First St. Eureka. Call 443-6363 for further information. Accident Gallery is located at 210 C St. between Second and Third streets in Eureka. It's open noon to 7 p.m., Tuesdays through Saturdays. More at 445-2420.