I Think My Older Brother Used to Listen to Lagwagon 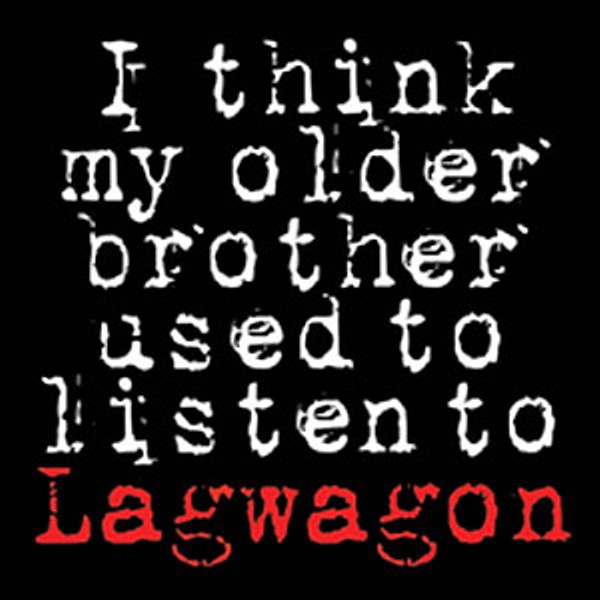 I Think My Older Brother Used to Listen to Lagwagon

When I first heard the album Trashed in high school, there was something so familiar, so honest, so inspired about Lagwagon's music that they instantly became my favorite band. It's surprising to say, but almost 15 years (and five albums) later, they still are.

As the title suggests, their newest (half) album, I Think My Older Brother Used to Listen to Lagwagon, is full of the often caustic, sometimes self-effacing wit and realism for which the band is known. While lyrics that focus on what it is like to be in an almost famous punk band may appeal mostly to old fans, there is plenty here among the seven short tracks on the album to appeal to new listeners as well, and perhaps even to draw in a whole new generation of Lagwagon fans. But maybe not, because while this album is clearly the work of seasoned professionals, it comes off as sluggish and uninspired when compared to earlier albums.

Where 2005's Resolve was a shot of hope to longtime fans, who feared that singer Joey Cape's solo career and self-pity would forever taint the band's sound, I Think... seems to be a regression, often sounding like Lagwagon covers of Joey Cape's acoustic tracks -- which, in fact, much of it is. That said, I can explain why Lagwagon is still my favorite band.

Cape's vocals, however angst-filled and spiteful they may be at times, give Lagwagon an inimitable sound, a distinctive edge that the hosts of later arrivals to the pop-punk scene are simply lacking. Even if you've never heard, or even heard of Lagwagon, you'd doubtlessly recognize the sound of their imitators: crunchy power chords, frenetically fast and busy drums, and a singer with a nasal voice and a Southern California accent as strong as malt liquor. But Joey doesn't deserve all the credit; guitarist Chris "Big Bitch" Flippin also puts Lagwagon miles ahead of its imitators, as does Chris Rest's guitar playing, Jesse Buglione's bass playing and Dave Raun's impeccable drumming. The new (half) album, while far from the band's strongest release, still sounds great, and is well worth the $7 price tag.

The truth is though, I'm biased. I'd be lying if I said that nostalgia and loyalty don't factor into my opinion of the new album. Still, it's impressive by any standards when a band manages to stay together for over 20 years, and Lagwagon has certainly grown a lot since their debut album Duh was released in 1992. The old beater of a van in which the band used to tour, and after which they are named, has long since broken down, but the band plays on.

All aboard the Lagwagon!