If Prosecutors Can Get a Grand Jury to Indict a Sandwich, Why Couldn't They Get One to Indict Kyle Zoellner? 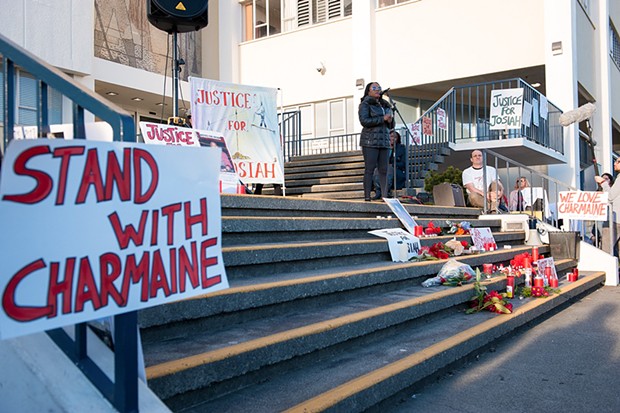 There's an old courthouse adage that says a competent prosecutor could get a criminal grand jury to indict a ham sandwich, if he or she wanted.

"It's ancient lore that the criminal grand jury sits as a bulwark of the citizen versus the overzealous government but the truth is they generally do what prosecutors want them to," explained Robert Weisberg, co-chair of Stanford Law School's Criminal Justice Center.

A Washington Post study of a year's worth of federal criminal grand juries found they handed up indictments in 99 percent of the cases presented to them. The Journal was unable to find any data specific to criminal grand jury outcomes in California, but both Weisberg and University of California Hastings College of the Law professor David Levine said the proceedings themselves are rare. Rarer still, they say, are the chances of one ending without a criminal indictment, given the fact that prosecutors are in total control of the proceedings, as well as if or when to initiate them.

That's some context to the news that came earlier this month via a press release from the Humboldt County District Attorney's Office stating that a criminal grand jury empanelled to look into the 2017 stabbing death of 19-year-old Humboldt State University sophomore David Josiah Lawson had declined to hand up any indictments in the case. The announcement was all the more peculiar in light of public statements former interim Arcata Police Chief Rick Ehle made regarding the strength of the evidence in the case.

Lawson was fatally stabbed at an off-campus house party April 15, 2017, after he was reportedly involved in at least two fights with a then 23-year-old McKinleyville man, Kyle Zoellner. Police arrested Zoellner at the scene but a Humboldt County Superior Court judge dismissed a murder charge against him a few weeks later, finding police had gathered insufficient evidence to hold him to stand trial. The case appeared to languish until late last year, when Ehle announced in November that his department was turning its investigation over to prosecutors, saying detectives had found "unequivocal physical evidence" linking a specific suspect to Lawson's death. Several months later, Humboldt County District Attorney Maggie Fleming decided to take the case to a grand jury, empaneling one Feb. 28. The Journal learned through the minutes of a related federal civil case that Zoellner was its target. In the wake of the grand jury's decision not to indict Zoellner, current APD Chief Brian Ahearn pledged to keep working the case, saying it is "solvable."

Levine and Weisberg said it's atypical for prosecutors in California to take cases to criminal grand juries. In the vast majority of criminal cases, they said, prosecutors simply file complaints accusing someone of a crime. Those cases then go before a superior court judge — as Zoellner's did — for a preliminary hearing (sometimes dubbed a probable cause hearing) to determine if prosecutors have enough evidence to hold the defendant to stand trial.

But prosecutors also have the option of forgoing that process and instead taking their cases to a criminal grand jury. Not to be confused with the civil grand jury — the investigative body that convenes annually to look into flaws in local government — criminal grand juries are empanelled in secret to consider bringing criminal charges in the form of indictments in specific cases.

In Humboldt County, criminal grand juries consist of 19 jurors, 12 of whom must find probable cause that a crime was committed to hand up indictments in a given case. (This is a much lower standard than the beyond-a-reasonable-doubt threshold jurors face at trial.) They are investigative bodies, meaning they have the power to independently subpoena witnesses and evidence, with individual jurors able to pursue their own lines of questioning. Criminal grand jury proceedings are also inherently stacked in favor of the prosecution.

When a criminal grand jury convenes, there's no judge to keep a prosecutor in check and no defense attorney to cross examine witnesses. The proceedings are entirely under the control of a prosecutor who walks jurors through the evidence in a case and questions witnesses, often with a court reporter as the only other person in the room.

"They are often very folksy and informal," Weisberg said. "The prosecutor gives a kind of opening statement, saying, 'Let me tell you why we're here.' They're very conversational and it's not unusual for grand jurors to ask questions of the prosecutor and witnesses."

There are two primary reasons that criminal grand juries are seldom used, according to Weisberg and Levine. First and foremost, they demand a lot of jurors — requiring 19 people to take time away from work and family just to consider whether a charge should be filed. Second, they generally require more of a prosecutor than simply filing a charge and making a brief showing of probable cause before a judge, who already knows the underlying law. With a criminal grand jury, a prosecutor is forced to bring lay jurors up to speed on not just the alleged facts in a specific case but also the applicable law. Generally, given the social context of the proceedings, Weisberg said prosecutors tend to be "impressively thorough" in their preparation and presentation of cases for a criminal grand jury. In short, they are cumbersome affairs.

It's worth noting that the Lawson case is the first time Fleming has empanelled a criminal grand jury in the five years since she took office.

Weisberg said there are a number of reasons prosecutors will take a case to a criminal grand jury. Indictments can send a powerful public message, especially in high profile or politically charged cases, he said, adding that the term "indictment" can intone a seriousness in public perception that ordinary criminal charges don't. And sometimes criminal grand juries are important investigative tools because of their subpoena power. In cases with recalcitrant witnesses refusing to speak with police, a grand jury can force their cooperation, whereas police and prosecutors can't.

Lastly, Weisberg said sometimes prosecutors simply want to see how a case would look not to their colleagues or a judge, but to average jurors.

"It gives them a chance to kind of beta test how their case looks to lay people," he said.

For her part, Fleming explained the reasoning behind her decision in an email to the Journal.

"We decided to convene a criminal grand jury in order to have the community evaluate the case," she wrote. "Also, we anticipated that a less public setting would provide witnesses with the best possible opportunity to provide accurate testimony in this extensively covered case. Had the grand jury issued an indictment, the case would have gone to trial without further delay or publicity."

The reliability of witness testimony has been a huge challenge for investigators and prosecutors in the Lawson case. During Zoellner's probable cause hearing in 2017, prosecutors called 18 witnesses to the stand and heard often divergent, conflicting testimony on everything from how many people attended the house party to exactly who was involved in the several fights that took place that night. That said, Fleming did not elaborate on why she felt witnesses might be able to provide more accurate sworn testimony before a grand jury than in front of a Humboldt County Superior Court judge.

Speaking generally and not about the Lawson case, Levine and Weisberg both said there can be another reason for a prosecutor to take a case to a criminal grand jury.

"It can give some political cover in certain instances," Levine said. "Let's say you have a high profile case in which the prosecutor knows the evidence is insufficient. To satisfy the community, to satisfy the family of the victim, the prosecutor can say, 'I'll try and see what I can do,' and then it's the grand jury that says, 'no.'"

Because criminal grand jury proceedings are secret and their transcripts are kept under seal in cases in which they don't hand up indictments, we'll likely never know exactly what led at least eight jurors to find there wasn't enough evidence to indict Zoellner for Lawson's death. We won't know if prosecutors took the case to the jury hoping to secure an indictment or seeking cover.

What we can say for sure is that while there is nothing preventing the district attorney's office from empanelling another criminal grand jury in the future or charging someone directly with causing Lawson's death, this is a stunning turn of events. After all, it was just a handful of months ago that Ehle told the Journal his department had found "unequivocal evidence" and that its investigative report — while it stopped short of recommending a specific charge in the case — would walk prosecutors through DNA and fingerprint evidence and detail a specific suspect's "motive, opportunity and means" to commit the crime.

Levine seemed to have a hard time squaring the strength of Ehle's public statements with the criminal grand jury's decision.

"For a prosecutor not to get a grand jury to indict, that's just rare," Levine said. "It's very, very rare."