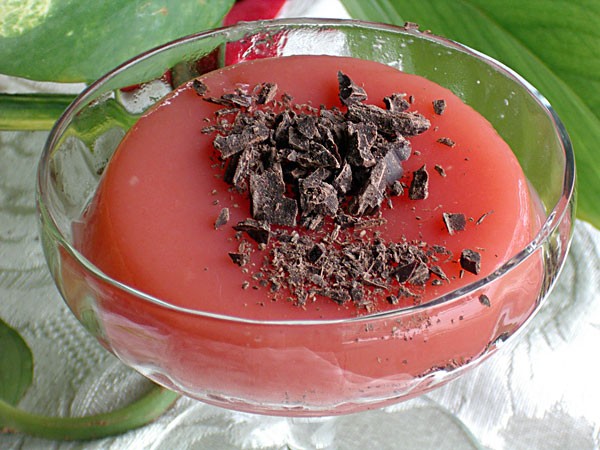 Boxes full of watermelons in grocery stores invite us to touch, smell, weigh with our hands, employ whatever method of assessment we rely upon to choose the specimen to carry home, cool, slice and savor. And quite of bit of that happens in this country: According to USDA figures, domestic per capita use of watermelon in 2008 was 15.5 pounds.

The sight of watermelons reminds me of my first Halloween in California, some 15 years ago. Italian children nowadays know about Halloween, but my early life dates back to a less globalized age, and the little I knew about the holiday then was the result of reading Peanuts comic strips.

In the afternoon of my first American Halloween, I was introduced to the pumpkin-carving tradition. While my then-future husband and a dear friend of his were busy pulling out seeds and strings from their respective pumpkin's bowels, somehow they started talking about Linus and his night vigil waiting for the Great Pumpkin. The words and the image of the carved pumpkins had a devastating effect: I felt like a piece of my world had come crushing down on me.

"What do you mean, the Great Pumpkin?"

The question was senseless, and I knew it the moment I asked it. Obviously, what else is Linus supposed to do on Halloween night? But that is not what he does in Italy: There he waits for il Grande Cocomero, the Great Watermelon. Did it ever dawn on me that October 31 is rather late in the season to be waiting in a field full of watermelons? No, because Linus waiting for the Great Watermelon made a lot of sense to a child who loved watermelons and waited patiently for the long months between seasons to eat them again. Because, on the other hand, waiting for the Great Pumpkin would have made no sense at all to a child who had seen very few pumpkins in her life and never eaten or carved one. (I grew up in central Italy, with a set of traditions around All Saints' Day and All Souls' Day, all of them pumpkin-less.)

It took me a long time to recover from the shock. Only after I had finally rationalized the unalterable fact that Linus, make no mistake about it, on Halloween waits for the Great Pumpkin, did I realize what a great idea the translators had had in having the Italian Linus wait for il Grande Cocomero. They renounced literal translation and captured instead the emotional essence of the situation, using watermelon, a fruit beloved by Italians of all ages up and down the peninsula. Watermelon and pumpkin actually belong to the same family of plants: Cucurbitaceae.

This being melon season, I will explore a traditional Sicilian dessert that I knew by name, but had never tasted: gelo di melone. (In Italy there are several names with local currency used to refer to watermelon.) The basic ingredients are puréed watermelon, sugar, and starch to thicken the mixture. Some of the recipes I read call for wheat starch, which I could not find. Other recipes use cornstarch, whose flavor I have sometimes found to be too prominent, when it should be playing a supporting role. Hence, for my version I tried different quantities of cornstarch and settled on the amount that I think provides a nice balance between consistency and flavor. (As an aside, I also tested tapioca starch and arrowroot and decided, in consultation with my husband, that cornstarch performs better in this context.) Different recipes use vanilla, jasmine, cinnamon, in some combination, to add nuances of flavor, and the surface decorations they describe include dark chocolate shavings, diced candied fruit and chopped pistachios (alone or in combination). I let vanilla be the only addition and chocolate the only decorative element.

A rather extended prologue, I admit, but I will not delay the telling of the recipe any further. Remove the rind from a ripe, sweet seedless watermelon to obtain one and 1/4 pound of pulp. Cut it into pieces and run through the food processor or blender until liquefied. Push through a strainer to eliminate the small, white seedcoats found in seedless varieties. You will end up with a bit more than two cups of juice (half a liter). (I have never used seeded watermelon to prepare this recipe. If I did, I would remove the hard, black seeds before processing the pulp.)

Pour some of the puréed watermelon into a saucepan and add a quarter cup of granulated white sugar (even less, if the watermelon is very sweet) and three tablespoons of cornstarch. Blend thoroughly so no lumps of cornstarch are detectable. Add the remaining watermelon. Bring slowly to a boil, stirring often. Maintain the boil for about five minutes, stirring constantly. The mixture will thicken somewhat. In the meantime, rinse four small ramekins, or similar dishes, and drain (but don't dry).

Remove the pan from the heat and stir briefly to slightly cool the gelo. Add half a teaspoon of good quality vanilla extract and stir to blend. Divide the gelo equitably among the ramekins and chill in the fridge until set, at least five hours. I have been unmolding each portion of gelo on a small dessert plate (it flattens a bit in the process), though serving it in the ramekin is fine as well. The photo shows a portion of gelo unmolded in a footed dessert dish. I think that gelo and glass go well together, so I am planning to chill my next batch of gelo directly in the dessert dishes. Final step: With a knife, make shavings from a piece of dark chocolate and sprinkle them on the surface. Bring to the table and enjoy.

If the number of prospective partakers requires it, double the quantities. I have also tested making the recipe in two steps. I had a nice piece of watermelon, but had to leave unexpectedly, so I weighed the necessary quantity of pulp, processed and strained it as specified above, then poured it into a container and placed it in the freezer. When I came back from my trip, I let the watermelon thaw and then proceeded with the rest of the recipe.

1 and 1/4 lb pulp of seedless watermelon

Push through a strainer to remove white seedcoats.

The resulting juice should be a bit more than 2 cups (half a liter).

Pour part of the puréed watermelon into a saucepan, add sugar and cornstarch and blend thoroughly.

Maintain the boil for about five minutes, stirring constantly. The mixture will thicken somewhat.

Remove the pan from the heat and stir briefly to slightly cool.

Divide between 4 ramekins and chill until set, at least 5 hours.