Christian radio reaches out to the masses 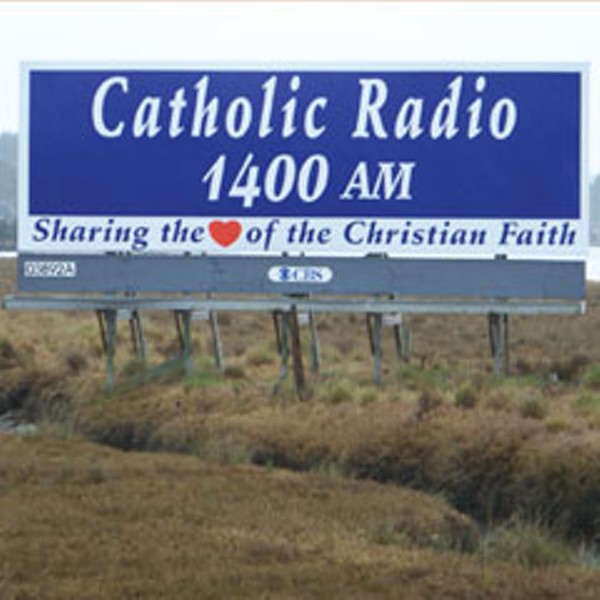 The large billboard along Hwy. 101 south between Arcata and Eureka is funded through local donations. Photo by Ryan Burns

Like virtually every component of Catholicism -- from a humble Rosary bead to St. Peter's Basilica -- Eureka's new Catholic radio station, KIHH Immaculate Heart Radio (1400 on the AM dial), can be traced rung by rung up the ecclesiastical ladder straight to the pope -- Pope Pious XI, in this case. See, Pious was the first pope to spread the Good Word via radio waves, establishing Vatican Radio in 1931. Here in the 21st century, the Holy See has proved just as eager to embrace new technology, launching its own Web page and YouTube channel. Pope Benedict XVI even has a Facebook profile, created by a supporter, with more than 34,000 fans.

And yet good old-fashioned radio technology is still going strong. KIHH, which broadcasts Roman Catholic programming 24 hours a day, is part of the 21-station Immaculate Heart Radio network, based in Fair Oaks. Nearly all KIHH programming comes free of charge from the Eternal World Television Network (EWTN), an Alabama-based non-profit claiming to be the world's largest religious media network. "What gives us the ability to make that claim is our radio service," EWTN Radio National Marketing Director John Pepe said via phone interview last week. Four 500,000-watt transmitters atop an Alabama mountain bounce EWTN programming off satellites to grids around the world, he said.

Immaculate Heart taps into that feed, broadcasting daily Mass along with programs like "The Pro-Life Rosary," "The Gift of Life" (which explores ways to "end the scourge of 4,000 abortions a day") and "Kresta in the Afternoon," a call-in talk show "with the New York Times in one hand and the Catechism in the other." While Immaculate Heart is not directly affiliated with the Church (it's a non-profit "lay apostolate," meaning it's run by worshipers devoted to the Church mission), each new station must be blessed by the bishop of the local diocese. For KIHH that was the Bishop of Santa Rosa, who was approached six years ago by a group of Humboldt County residents seeking Catholic radio in Eureka.

"He certainly supported us," said local insurance agent and Catholic Deacon Steve Justice, who was instrumental in organizing and fund raising for the new station. A number of technical and environmental hurdles delayed the project, but KIHH eventually obtained an FCC broadcasting license and arranged to piggy-back on an antenna owned by Hugo Papstein, whose local talk radio stations KINS and KWSW offer conservative commentators like Rush Limbaugh, Bill O'Reilly and Michael Savage. Justice credits "perseverance and a lot of help from the Lord" for KIHH's launch on July 26, 2008. "It was a glorious day when they threw that switch," Justice said.

With no local programming or employees, KIHH offers a relatively cheap venue for reaching the 13,000-plus local listeners claimed by Immaculate Heart General Manager Lori Brown. The organization's total administration costs amount to less than 10 percent of its budget, Brown said. "We have more stations than we do [employees]," she added.

Religious-based radio has a markedly different funding model than commercial radio, with money coming almost exclusively from listener pledges and underwriters. But that doesn't mean they're immune to the economic downturn. Christian radio giant Salem Communications recently sold four stations and eliminated 10 percent of its workforce, while Focus on the Family, which has produced James Dobson's radio show since 1977, has eliminated roughly 450 jobs since 2004, according to the Los Angeles Times.

"We have been affected [by the economy]," Brown said. "But we're very, very blessed because people are so devoted to our mission -- they try to find a way to do something." When asked whether radio is still the best way to deliver the Church's message in the age of the BlackBerry, Brown said they do try to keep up on new technology as needed. You can listen to Immaculate Heart online, for example, and they offer podcasts on iTunes. "But we're all about doing what works at the most cost-effective level," Brown said. "I know people think [radio] is dated, but the bottom line is it works."