I Love You Because, a wordy wander with moments of transcendence 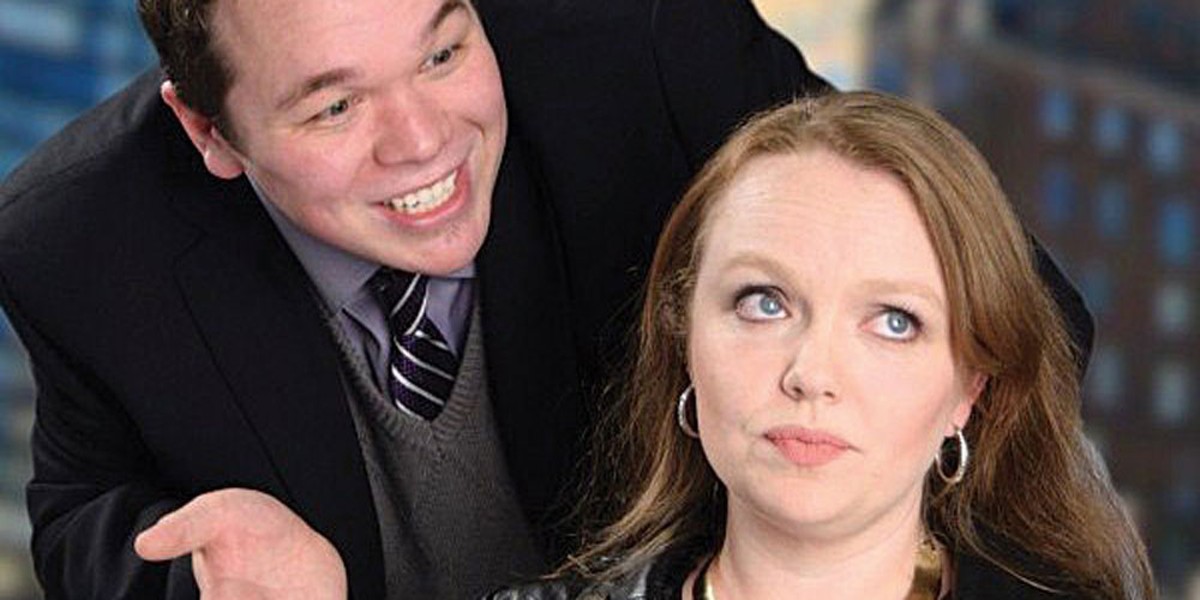 Humboldt Light Opera Company typically mounts a big production in late summer and a smaller musical in spring, often staged at College of the Redwoods with accompaniment by a single pianist. Meanwhile, Redwood Curtain, which tends to specialize in contemporary "relationship" comedies, occasionally does a small musical with that theme. A few years ago the two groups actually did the same show (The Last Five Years) within months of each other.

So the companies' partnership of sorts seemed natural, resulting in I Love You Because, the small musical about relationships now on stage at Redwood Curtain in Eureka. Featuring HLOC's director, Carol Ryder, and cast, it benefits from the intimacy of the small house, where it is possible to practically sit in the pianist's lap.

As to be expected from a HLOC production, the singing was strong and the direction was fluid and inventive. The comic acting met the high standards of both HLOC and Redwood Curtain. And then there's the play.

I Love You Because is a contemporary musical comedy about 20-somethings in New York City. Austin, a conservative greeting card writer (played by Craig Waldvogal) and Marcy, a free-spirited photographer (Sarah Mullen) are each facing the end of a relationship. Marcy's mathematically inclined friend Diana (Amy Chalfant) counsels her on the correct number of months she should allow before getting serious about someone else. Austin's buffoonish brother Jeff advises him to play the field. Shaelan Salas-Rich and Carl McGahan play the chorus of barkeep, waitress and barista.

Austin and Marcy, Diana and Jeff meet cute, then wobble into sexual liasons until the end of the first act, when all of them are breaking up and desolate. Guess what happens in the second act.

I Love You Because is written by Ryan Cunningham (book and lyrics) and Joshua Salzman (music), at least partly while they were students in New York University's musical theatre graduate program. The play has the seams-showing quality of a thesis, layered with a lot of what's euphemistically called "language."

The mostly upbeat music is dominated by the kind of wordy, wandering pop that's become standard since Alanis Morissette. It can express contemporary self-consciousness and emotion, while also exposing banalities. The lyrics, like the script, vary alarmingly from the witty to the moronic.

Still, the score is mostly pleasant and has some variation, from doo-wop to a couple of second-act songs that might fit nicely into a '40s or '50s musical. And it has the proper mixture of solos, duets and quartets, likely learned from the NYU curriculum, that with this cast yield some transcendent musical moments. During scene changes, this production played vivid taped testimonies by North Coast people about their actual love lives.

There are funny bits in the formulaic script. The original producers billed it as a gender-switched version of Pride and Prejudice, but except for a few Austen puns and distant, meaningless echoes, the claim is so disingenuous as to be counterproductive. People who don't really know Pride and Prejudice won't care, while Austen devotees may be so offended that any chance of appreciating the evening on its merits is lost. If Jane Austen herself got wind of this claim, she'd likely be throwing up in her grave.

The competitive and superficial frenzy of New York may well have spread among 20-somethings with the speed of Instagram. This potential audience, dealing with real emotion in their lives, may appreciate the musical's observations and messages, especially about accepting imperfection. But a better script and more of a sense that the appropriate characters are actually attracted to each other might make this a convincing experience: more of a show than a tell.

Laura Welch is musical director and accompanist, Jayson Mohatt is scenic and lighting designer. I Love You Because is on stage at Redwood Curtain through May 17. This unusually long run is meant to compensate for the small number of seats, so reservations are highly recommended. 443-7688, www.redwoodcurtain.com.

Ophelia, Lady Macbeth and all female characters in Shakespeare and English drama were played by males before King Charles II decreed in 1660 that henceforth they must be portrayed by actual women. Playhouse Creatures, by contemporary British playwright April DeAngelis, is about those first actresses, and its Old Vic production was billed as a "tragic-comic burlesque." An HSU production opens on Thursday, April 24 for a two-weekend run. Directed by Mark Swetz, it features Queena DeLany, Anna Duchi, Michelle Purnell, Ambar Cuevas, Vanessa Fragoso, Adrienne Ralsten, Giovanni Alva and Kyle Rispoli. Scenic and prop design are by Derek Lane, costumes by Kaden O'Keefe and lighting by James McHugh. Shows start at 7:30 p.m. in Gist Hall Theatre on Thursdays through Saturdays, with a matinee on Sunday, May 4 at 2 p.m. 826-3928, HSUStage.blogspot.com.