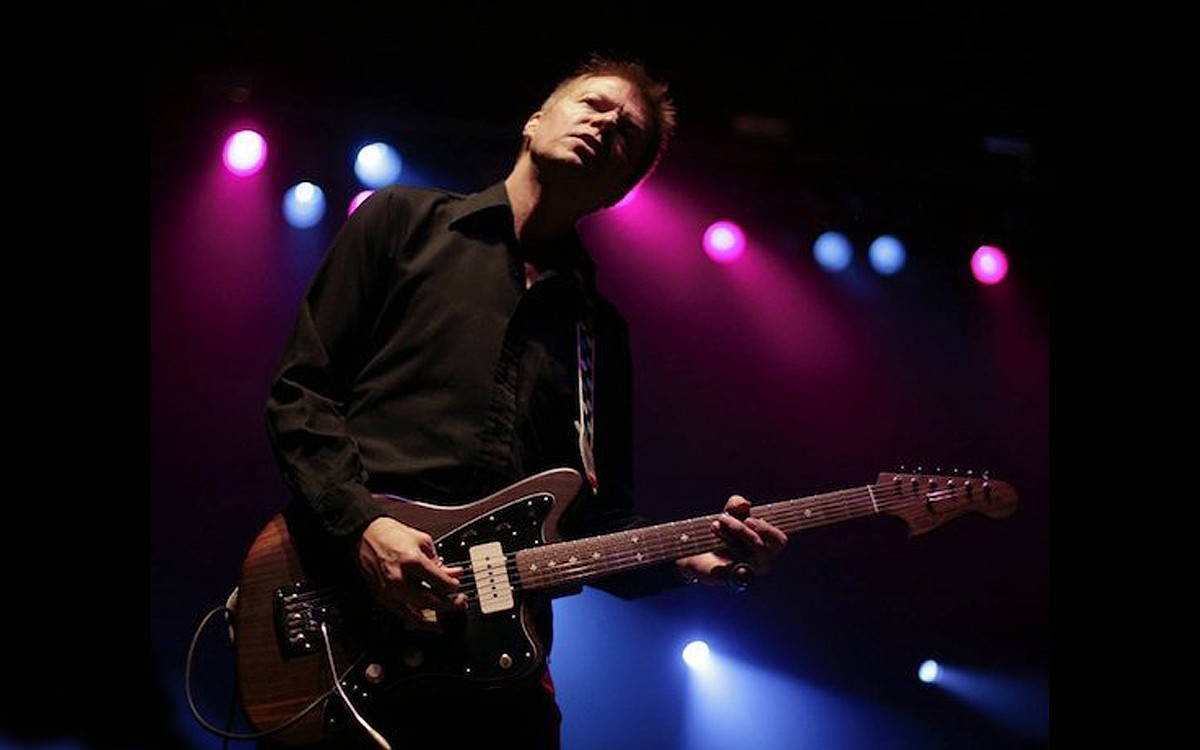 When Rolling Stone magazine revised their list of the 100 top guitarists of all time a few years back, they added 20 "New Guitar Gods" to the firmament. Among them was Nels Cline, lead guitarist for Wilco since 2007, and leader of a jazzier improv ensemble called The Nels Cline Singers.

There are no vocalists in The NC Singers. The current line-up has Nels on guitar and founding member Scott Amendola on drums. Former Eurekan Trevor Dunn from Mr. Bungle has replaced Devin Hoff on bass. And for this short tour, the band includes special guest Yuka Honda, keyboardist from Cibo Matto and the Plastic Ono Band and, as of November, Nels' wife.

When we caught up with Nels by phone on Friday, he was in a Chicago studio working his day job, recording a new album for Wilco. His job? "I supply guitar parts and the strange noises." We leapt from talk of the work-in-progress to Singers biz.

NCJ: Is the addition of two new Singers going to shift things in a different direction?

Nels Cline: Well, Yuka's not really a member of the Singers; she's kind of our guest periodically. Certainly that shifts things in a new direction. I guess part of the last record Initiate was shifted by adding the keyboard element. The style of the writing may be a little more groove oriented and whatnot. We toured with Trevor last summer when Devon [Hoff] couldn't make the South American dates and it was surprisingly easy. It was what I always do in a way; there was a lot of freedom, there were no big innovations. Being able to have Yuka onboard will be great. She's been busy in New York working with Petra Haydn in her band, If By Yes, with drummer Yuko Araki and Hirotaka Shimizu on guitar. They have a record about to come out (Salt On Sea Glass) on the label Yuka has with Sean Lennon.

Is there a certain amount of shifting gears required moving from recording with Wilco to playing quite different music with your own band?

Yeah, but mostly in the fact that it's been a while since I played my own music. So basically I'll need to sit down and relearn things. Beyond that I need to kind of reassess the repertoire and what it is I want to do this time. I have some ideas about stringing songs together and changing things lightly that way, but until we start playing, well, there's only so much I can do. But as far as shifting gears, aesthetically it's not a big shift. Going from playing with Wilco to playing with my own band is not really a stretch.

Are they the same thing on some level?

It's all just playing and it's hard, but it's not a big leap. Playing in the Singers is certainly taxing in some ways on my tiny brain, just because I'm sort of playing all the time, playing hard and aspiring to have some sort of degree of lucidity in my improvisatory flights of fancy.

Are there any limits to where you can go musically? You've been officially deified by *Rolling Stone*. Does that give you unlimited god-like power as far as what you can do?

I don't take that seriously, the Rolling Stone thing. It was something nice to tell my mom about when she was alive. You know there's a lot of things I can do technically and things I can't quite grasp theoretically. I'm certainly no bebop wizard. But I've always done whatever I wanted, since I started my first trio I should say. At least as a leader I've always followed my own impulses, that was the liberating thing about starting my own band. I never really saw a conflict between so-called jazz and so-called rock, so-called free and so-called structured, all those arbitrary musical barriers. Having my own band unleashed my tendency to want to erase those borders. I could do whatever I want aesthetically and I continue to do so.

Just because you're the guitar player for Wilco, it's not really expected that you play in that particular genre or style.

As far as the effect that playing with Wilco has had on what I'm doing with my own music, it has a lot to do with the curiosity and support from the Wilco audience for these live gigs. A lot more people come to my gigs since I've been playing with Wilco -- and they come to hear me play my own stuff. I don't think I'm selling too many more records as a result of that, but it's certainly brought more people out. And even if it hadn't made the tours more lucrative, it's gratifying, and I love it.

The Nels Cline Singers play at the Arcata Playhouse Wednesday, Feb. 2, at 8 p.m. Tickets are $18/$16 in advance. Call 822-1575 or go to www.arcataplayhouse.org for additional details.