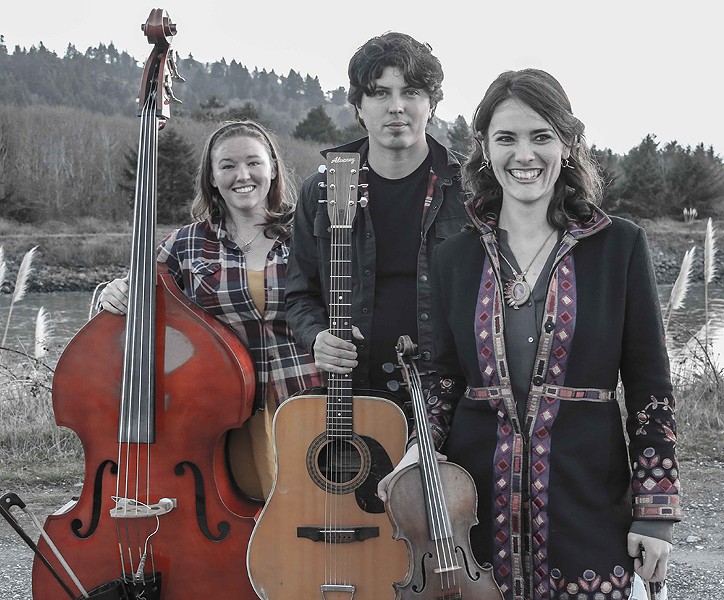 It's the last week of April. May Day is coming and with it comes the right time to watch what is maybe the greatest musical ever filmed, Robin Hardy and Anthony Shaffer's The Wicker Man (1973). More importantly, nature gets into the whole blooming concept and the average citizen can expect to get a little bit dizzy from the opening salvo. I have been told by friends — mostly city dwellers — that talk of the weather is the lowest form of conversation. But we live in this fucking stuff, right? Nature I mean. We might as well mention it and exalt when necessary. This week it seems necessary so have an honest go, eh?

I'm right there with you.

Chicano Batman, the super fun Tropicália-infused soul and pop quartet from Los Angeles, is back for what is sure to be a great show at the Kate Buchanan Room. I would expect this one to reach capacity, which is good, as this group thrives off of a lot of dancing bodies in the room. Brainstory opens at 8 p.m. ($25, $20 students).

No Pardon plays the first of a long weekend of shows in celebration of today's release of its new record Whisper. In addition to a Saturday show at the Westhaven Center for the Arts and a gig on Sunday with Lyndsey Battle and Cory Goldman, the trio is playing a brief in-store set at The Works today at 4:45 p.m. The gig-let will be followed up by a listening party of the new album (free).

Growing up in Dows Prairie, I was aware of a cultural/geographical line that hovers somewhere around the Mad River. Arcata seems like a long haul to those in the boondocks of the unincorporated northern vastness between the Giuntoli Lane and Trinidad exits on U.S. Highway 101. And Eureka was often a bridge too far. With that in mind, allow me to suggest two sets of shows for those of you bound by my arbitrary delineation.

In Eureka there are a couple of absolute winners going down. First at Siren's Song at 9 p.m. you can catch Dub Narcotic Sound System, a group headed by K Records founder Calvin Johnson for more than two decades. Along for the all-ages ride is a diverse crew of locals: Vagsicle, Sue and the Namis and Clean Girl and the Dirty Dishes ($6).

Over at the Eagle House at 10 p.m. another beloved figure from yesteryear is back in town. This dude happens to be from the future, as well. I am, of course, talking about Del the Funky Homosapien, returning to spread the weirdo hip-hop gospel again. This time through he brings past collaborators MIke Relm and AmpLive ($25-$45).

North of the Humboldt Bay Municipal Water District's source, you can catch the second installment of No Pardon's record release shows at the Westhaven Center for the Arts at 7:30 p.m. ($8, $20 with CD). And if you are still hungry for string music, you can head to Papa Wheelies Pub at 9 p.m. to catch the Rinky Dink String Band for no money down. There, I did it: another venue's first time in this column.

Camp Winnarainbow is having a fundraiser with Absynth Quartet and Dead On at the Arcata Playhouse. The music starts at 8 p.m. but there will be a V.I.P. mixer at 6:30 p.m., featuring the co-founder and figurehead Wavy Gravy himself, who, I discovered in the course of researching this event, is still alive. It's for a good cause steeped in arts and theater, so come down and have some fun ($20, $35 V.I.P.)

The Miniplex hosts a familiar showcase of underground West Coast hip hop. Aceyalone, Myka 9 and Abstract Rude all congeal their talents toward a greater power than the sum of its parts under the moniker Haiku D'Etat for a live 9 p.m. show which will surely settle into the ambient brilliance of these Los Angelinos' formidable stage game. Just $15 gets you in the door on the night of but you can score early bird tickets online for $10.

It's the last day of April, which means nature is popping off spectacularly across our county. There is perhaps no more corking spot for the full experience than by our still-dangerous rivers. Luckily, I can recommend a river-adjacent spot where you can indulge in these pleasures without risking an inconvenient drowning. The Mad River Brewery tasting room hosts Blue Lotus Jazz starting at 6 p.m. (free). This duo plays many-stringed guitar arrangements of the standard jazz songbook, which is exactly the sort of thing to accompany a beer or two on this mid-spring evening.

There's a Mayday March and music festival in Eureka today to celebrate the erstwhile Labor Day and the importance of direct action and intersectionality. The march starts at the courthouse at 1 p.m. and heads to the gazebo in Old Town to witness various labor-aligned speakers. Music starts at 4 p.m., featuring local gems Blackplate, Moonsong Band, Irie Rockers, Unholy Orifice, DJ Pressure and more. Like most of these events, the admission doesn't have a monetary cost, but the resulting solidarity is priceless.

Collin Yeo looks before and after/ and pines for what is not. And his sincerest laughter/ with some pain is fraught. His sweetest songs are those that tell of saddest thought./ He lives in Arcata and cribs Shelley quotes for clout.