In Defense of American Cheese 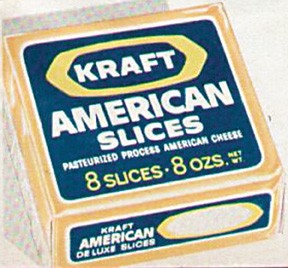 A couple of years ago, in a column called "Secret Ingredients," I wrote of the crowning touch to my baked macaroni and cheese, revealed to me by Gus, chef of the late Crest House in Culver City:

After it has baked, before heating and serving, over the top of the casserole you place slices of American cheese. Yep, that's what I said. No, not cheddar, just plain American. Another secret ingredient. It gives the top the perfect oozy texture.

American cheese! That plastic-like substance that everyone knows is fake cheese made from milk and chemicals? I was surprised. The macaroni already had a wonderful cheese sauce, but a topping of Velveeta?

I should have been horrified. I hadn't had American cheese in my home fridge for a decade -- my cheeseburgers were made with aged cheddar. But Gus was a master chef. I would be a fool not to learn from him.

It turned out I had a lot to learn, and American cheese is now a valued ingredient in my kitchen. While it doesn't replace "real" cheese, its unique properties and versatility are critical to many dishes.

American cheese is the cheap, machine-made stuff that comes pre-sliced and drapes neatly over the palm of your hand in a perfect square -- a kind of cheese that is, truth be told, only partly real cheese. A "processed cheese," virtually unknown outside our borders, the most common form is a blend of milk, milk fats and solids, cheese culture, and something called "whey protein concentrates." In its Kraft form, it is called a "pasteurized prepared cheese product." It's historically a legacy of WWII, when it was a creative way of recycling industrial dairy waste into extrudable blocks of stuff that would melt without separating, and have a long shelf life. Enzymes account for most of the flavor. The preservatives, as such things go, are pretty harmless.

I realize that there are kinds of American cheese that are combinations of cheddar, Colby and other cheese, but Wikipedia and I agree that the most common definition of the term is a processed cheese product. In the interest of forestalling endless arguments, a list of FDA definitions can be found online.

American cheese's continued popularity may not be as much based on its mild taste as much as its texture. It holds together very well and melts into a gooey sheet that is perfect for burgers and other heated sandwiches. The taste? Well, since when have Americans cared how cheese tastes? (The best-tasting cheeses are made from unpasteurized milk, which represents about 0.5 percent of domestic cheese.) But it's actually not bad, a slightly tangy, salty flavor, like an unripe Brie.

American cheese is preferable to "real" cheese for many dishes where melted consistency is important. Like grilled cheese sandwiches. Try using a good cheddar or Swiss, and by the time the bread is browned the cheese inside will be only tepid. John Thorne, of Simple Cooking, gives the following simple recipe:

Flip the sandwich. Serve it as soon as the other side is golden-brown.

I've made an excellent croque-monsieur -- a French variant of grilled cheese -- using thin slices of Black Forest ham surrounded by American cheese. (My secret for great grilled cheese sandwiches is to have a little bowl of sweet pickle juice to dip them into.)

No list of American cheese sandwiches would be complete without the Philly Cheesesteak. Philadelphian John Fischer writes, "Real cheesesteaks are cooked fresh, covered with American cheese, provolone or Cheese-Whiz and rest in a roll dripping with grease. Sound disgusting? You're obviously not from this town."

A proper Philly Cheesesteak is made with top sirloin, a cut too lean and tough to use for steak. It is sliced thin (freezing it for a few minutes helps), cooked on a flat grill using grease, and as it is cooked, chopped with an offset spatula. To prevent the beef from overcooking, it is tossed with previously grilled onions (and sometimes peppers), and the whole mess scooped into a long, soft bun, adding room temperature American cheese, which melts just enough to hold the other ingredients together. When the sandwich is served, the juices should drip from it. In order to avoid ruining their clothes, Philadelphians have learned to practice what is referred to as the "Philadelphia Lean," bending forward to eat the sandwich, instead of bringing it to your mouth.

The unique property of melting but not separating makes for some exotic but successful combinations, such as

Combine everything with a little water in a saucepan over low heat. When the cheese is half melted, the blend will probably look curdled. Vigorously stir until it becomes creamy and smooth. Serve immediately with tortilla chips, or store refrigerated for up to a week.

Nor does American cheese need to be served warm. One of our fondest restaurant memories is Dallas's Highland Park Cafeteria. There we had a salad so amazing it became a signature at our restaurant, Byrd House. Torn spinach leaves were lightly tossed with mayo mixed with plain French's mustard, sprinkled with minced hard-boiled egg and confetti-cut American cheese, with a spoonful of horseradish on the side. The cheese bits provided a rich contrast to the sour and bitter flavors. We called it, "Texas Spinach Salad," and it was one of our most popular dishes. I'm getting hungry for some right now, and as several stands at the Farmers' Market sell clean baby spinach, we'll have it this weekend.

Coming up: In Defense of Spam