In Defense of SPAM – Part II

Is it good for you? 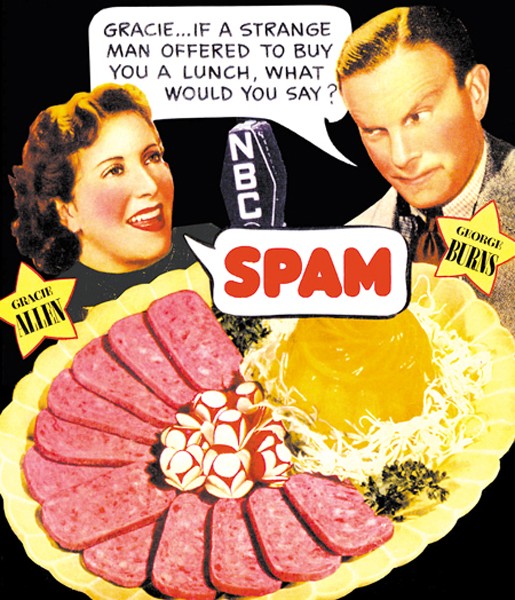 "Slow down," she whispered
now guiding my trembling hands
"Turn the key slowly."

Pink tender morsel
Glistening with salty gel
What the hell is it?

Pink beefy temptress
I can no longer remain
Vegetarian

Of course, Coke has a secret formula. SPAM, on the other hand, has no trade secrets. It lists everything right there on the can: "Pork with ham, salt, water, potato starch, sugar, and a touch of sodium nitrite." But just how healthy -- or not -- is SPAM? And how do we really know?

Let's take the last ingredient first. The "touch of nitrite" preserves the lustrous pink color. It's used throughout the processed meat industry, in bacon and corned beef for example. Studies in the 1970s linked the consumption of nitrite with cancer and, for a decade, many credulous people, myself among them, avoided meats cured with nitrates.

Then in the ’80s, subsequent reports by the National Academy of Sciences thoroughly refuted the earlier findings. We are continuously bombarded with incomplete and partisan data from many sources and we have to glean the facts from the urban myths that surround so many foods.

One of those myths is the perception of SPAM as a grotesquely fatty food, the equivalent of the worst excesses of the fast food industry in burgers and fried chicken. But let's compare SPAM with other actual processed meats. (See Nutrition facts chart.)

Three ounces of SPAM is a big slab about 3/8 inch thick. To make a sandwich I slice that into three thin slices, overlap them on good bread, add mustard, tomato, onion and lettuce. For under 400 calories, that's a substantial lunch.

In short, half the fat in a "Big Mac" and 3 grams less than a "Filet 'O Fish." Could it be that SPAM is good for you?

Linda West Eckhardt has been a food writer all her life. A James Beard and Julia Child Award winner, she is currently editor of The Silver Cloud Diet.

"At the Weston Price Foundation meeting last fall, they were recommending SPAM to prisoners in state pens for its nutritional value, being high in protein and natural animal fat. SPAM is not an unhealthy product. On the contrary it is a nutrient-dense, tasty product that has served people for decades.

"In fact it's much healthier than most of those dreadful 'healthy' soy vegetable protein products manufactured by American megacorporations. Based on extensive research, it seems that in mature adults soy raises estrogen levels, lowers testosterone and sperm production in males, and increases fat deposits in females. Textured vegetable protein (TVP), also known as soy meat, or soya meat, is truly a diabolical product, fed to prisoners in state pens, because it is 'cheap.'

"The prisoners provide the perfect test case because they can't cheat on the diet. Inmates routinely suffer from gastrointestinal distress -- neither humans nor animals can easily digest TVP -- that starts with gas and can lead to more serious problems. The estrogen also tamps down the libido.

"People need high quality protein and natural fat in their diet for health and weight control. SPAM is a product that provides them."

SPAM is consumed all over the world: stir-fried with noodles, in fried rice, in burritos, soups and sushi. SPAM musubi, which originated in Hawaii, has gained popularity in Japan and Korea. Virtually all of these cultures use SPAM to provide bursts of flavor and nutrition in otherwise high-carbohydrate meals. But not always: former San Francisco Chronicle restaurant critic Stan Sesser wrote of visiting a remote Hmong village in the mountains of Laos, where as an honored guest he was served "skewered charcoal-broiled cubes of an Asian kind of paté, with a fiery dipping sauce." He was charmed -- until he discovered what I think you can guess.

It's clear that a lot of Americans don't "get" SPAM. Disregarding all the jokes, the Monty Python sketch, SPAM sculptures and the many SPAM festivals and cook-offs from The Maryland State Fair to the Austin, Texas "Spamarama," there's one basic issue: SPAM is working-class cuisine. And while foodies give lip service to "comfort food," they have a hard time with something they perceive as culturally inferior, particularly if it comes out of a can.

SPAM has long been stigmatized as "poor people food." And it is indeed far cheaper than anything you can buy at a deli. It is convenience and nutrition, all in one. Last Christmas Day, we went out searching for breakfast; nothing was open. No matter. We returned home and had sautéed SPAM on English muffins, topped with scrambled eggs and garden herbs.

A particular favorite recipe is one I take to pot-lucks: Simply score the broad side of a SPAM into diamonds, each with a clove in the middle. Top with the can gel, mixed with dry mustard. Bake at 375 for 30 minutes, basting every few minutes with Dr. Pepper. Serve at room temperature, with a sharp knife and Ritz crackers. Quite a sight. Sure, people laugh. But it's always the first dish to go.

Here's my personal haiku to it:

Joseph Byrd can be vilified directly at eat.your.spinach@gmail.com