In Pursuit of Happiness

The other Clinton gets funky at the Mateel, Steel Toed Slippers CD release at Mazzotti's 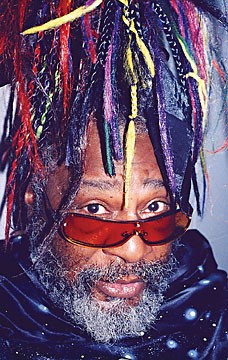 He's the master of the psychedelic funk he branded funkadelic, the spacey Captain of the Mothership. With James gone, you could say George Clinton is the funkiest man on Earth.

The music he made with various iterations of his bands Parliament and Funkadelic was sampled left, right and sideways to become the basis of hip hop. Did he reap the profits? Not yet, but he's working on it. When we talked last week, he detailed the status of his court cases. He has the lawyer from the Hendrix estate working to reassert the rights to his back catalog and associated royalties. He's won his first case and is awaiting a damage judgment. And when he becomes a millionaire, what's his plan?

"I'll just go around doing shows, having fun funkin'," he told me.

Isn't that what you're already doing?

"I'm not going to learn any new habits. I'll just keep funking it up, going fishing, maybe I'll buy me some Viagra."

Just what does that word funk mean to you?

But when you got going at the end of the '60s it seemed like you were all about blowing minds.

"You see it was a positive blow then. You'd get fucked up and it was positive, but then it started becoming literal, and people were thinking they had to be crazy to do this. You got to be in charge of your crazy so whatever you funk up, you're still in control. It's not always easy."

And you have no regrets?

"Nah. I'm having a ball. In the pursuit of happiness, I'm successful. I don't ever want to catch it. The pursuit is what it's about. I'm still going after it."

Elsewhere on Friday, young rockers Steel Toed Slippers celebrate the release of their first CD, The Mixerfish Album, at Mazzotti's. I have no idea what a mixerfish might be, and what are Steel Toed Slippers anyway? Vocalist Emily Totten is somewhat vague, offering, "Besides the name of our band a type of footwear I suppose." Drummer Matt Moss does not go much farther, saying, "I guess you could say, there are four of them in the whole world." Guitarist Will Nicoll gets deeper: "They're heavy but comfortable, intriguing but accessible and slightly assimilated, ponderable, but solid." Bobby Amirkhan, aka BassFury, waxes poetic, suggesting, "They're all the rage in Sweden. You may have thought clogs were in fashion there, but don't be fooled by shoe propaganda, they're all about the Steel Toed Slippers over there. But seriously, we're just a group of young and passionate musicians who want to make people think with our music while they dance and rock out." Note: The Mazzotti's show is all ages, so STS' high school classmates are welcome.

How 'bout some alt. hip hop? Head to the Red Fox Friday for a Portland crew including Sleep and Zelly Rock and Jon the Baptist and Peg Leg (of Science Non Fiction). Our own Republican Duck Hunters open. (I'm guessing you can read more about this one in the T-S' Northern Lights, since one of the Hunters is now the editor.)

Has it really only been a year since David Ferney and Jacqueline Dandeneau established the Arcata Playhouse? I guess so. They're celebrating the first anniversary Friday with Cl?ºb Shampoo,a sometimes comic musical review with Lila Nelson, Jeff DeMark, Glasnost Gypsy Band, The Brendas, Joyce Hough and Fred Neighbor and many more.

Fans of the Neville Brothers and New Orleans funk in general will want to catch the PBS show Thursday at Red Fox. No, not the TV PBS, this is Porter-Batiste-Stoltz, as in George Porter Jr., bass player from The Meters, drummer Russell Batiste Jr. from The Funky Meters, and Brian Stoltz, guitarist for the Neville Bros.

It's Prom Night Saturday at the Vista. Well, not really, more like a dress-up Valentine show celebrating the return of former locals The Ian Fays, who are making it big (well, bigger) in San Francisco. They share the bill with former bandmate Julia Cupp's fine band The Broken Hearts and another iteration of thelittlestillnotbigenough. Formal wear encouraged. They'll have a photo corner for those who want souvenirs.

They're calling Saturday's show at the Pearl Lounge "The Portland Bluegrass Invasion," and the three bands, Whiskey Puppy, Chickweed and Clampit, Gaddis & Buck, are on their way home from the San Francisco Bluegrass & Old Time Festival — but be forewarned: The bands from Oregon are more alt. old timey than straight-ahead bluegrass. For real bluegrass try The Del McCoury Band, who play the night before at HSU (more details in the calendar section) or, for the local version, the Compost Mountain Boys' monthly gig, Thursday, Feb. 7, at Humboldt Brews. Don't know how it happened, but that day is also the first in a monthly series of first-Thursday-of-the-month Humboldt Folklife Society Bluegrass Jams held at the Freshwater Grange with fiddler Judy Hageman hosting. If it lines up that way every month, y'all might wanna think about moving the Folklife Jam to another night.

After a semi-soft opening, Aunty Mo's kicks in to seven-day mode this week, running noon-2 a.m. daily. DJ Joe-E spins what new owner Justin describes as "totally gay dance music" on Thursdays, former ELFS DJ, Blancatron, is there Saturdays and DJ Miyagi takes it back to the '80s Sundays. The Sisters of Perpetual Indulgence host a grand opening Mystery Ball Mardi-Gras Masquerade and Coat Drive this Sunday at noon. Bring a coat, sleeping bag or warm blanket for the homeless and you get in for just $2.

It was 10 years ago when San Diego indie rockers Armistead Burwell "Zach" Smith IV (of Three Mile Pilot) and Rob Crow (from Thingy and Heavy Vegetable) joined forces as Pinback. While Rob has been here a few times, I don't recall the duo ever playing Humboldt. That changes Monday, Feb. 11, when Pinback hits the Kate Buchanan Room with geek/gangsta rapper Chris Ward IV, aka mc chris.

Remove all but the drummer and percussionist from the jamband String Cheese Incident, add some synths and looping devices and you get EOTO, (End of Time Observatory). Groove to the burbling rhythms of Michael Travis and Jason Hann Monday at the Red Fox.

Wednesday at the above-mentioned Arcata Playhouse, an evening of politically charged folk with ace songwriter/deep thinker/activist/poet Jim Page, on the road with Citizen Band, who note on their website, "Our guiding vision is simple. We believe that capitalism sucks and there are all these fucking greedy capitalists bent on ruling the world and wreaking destruction on all living things. The fight to change all this is long, hard, and sometimes sickening and laughter is the only medicine that everyone can afford. So we go for laughter in quantity (especially since we're not that good at music)."

Feb. 6 is the day Bob Marley was born. There's a touch of irony in the fact that I'll spend much of his birthday in a room at the Red Lion, where warring parties battle over Reggae contracts in front of the grandson of the late Chief Justice Earl Warren.

The following Wednesday, Feb. 13, Sonoma-based reggae band Groundation brings its 8th annual Bob Marley Tribute Tour to Humboldt Brews. Special guest for the all-Marley music tour is guitarist Will Bernard who is up for a Grammy for his album Party Hats. Incidentally, the disc features Groundation's drum/bass team Paul Spina and Ryan Newman on several tracks.

By chance that's also the day for the weekly Wednesday reggae night at Jambalaya featuring One Wise Sound with Aka Boom. And, in an unfortunate bit of counter programming, Wednesday is the day forHigh Voltage Reggae at Blue Lake Casino's Wave with your hosts Jah Sun and Ishi Dube (I'm told their back-up band is killer). I don't recall which club declared Reggae Wednesdays first. Let's hope it won't take a lawsuit to decide which show survives.

If you have cable TV and tune it to Access Humboldt Channel 12 this Friday at 10 p.m. you can catch Ishi on the debut of Live with Passion, a local music show hosted by Steve Watts of Passion Presents and a woman described in their p.r. as "the lovely Katie Mae." In the future the bi-weekly show will showcase music by Jah Sun, Moo-Got-2, Subliminal Sabotage and Mobile Chiefing Unit, maybe even the Steve Watts Band. Out on the town Friday night? Catch rebroadcasts Sundays at 11 p.m. and Thursdays at midnight. Live music at home? Now there's a conundrum.