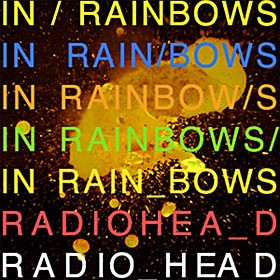 By now, everyone knows what happened: Radiohead reemerged from nowhere on Oct. 1, announcing that they planned to release a new studio album in 10 days, and by the way even though they’re one of the biggest rock bands in the world they’d be releasing it themselves on the Internet, oh and also by the way you wouldn’t have to pay for it if you didn’t want to.

All over the world, excited young men with three days of scratchy beard-growth on their faces put down their graphic novels and fired up their blogs; in 24 hours Radiohead had generated a year’s worth of buzz. They’d singlehandedly destroyed the traditional record industry, or at least shown themselves to be bravely forward-thinking. This was the tipping point. Mp3s would be free to graze in the green pastures of our iPods.

It almost doesn’t matter whether the record is any good — but it is. For the first time in years, the band has made an album that actually feels good to listen to: warm, consoling, maybe even optimistic. The distorted, clomping beat that kicks off “15 Step” is a red herring: This is an album full of — gasp — actual songs, with guitars and singing and everything. On tracks like the hypnotic “Weird Fishes/Arpeggi” and the percussive, groovy “Reckoner,” the band flexes its experimental muscle while sticking to the compelling melodies and guitar riffs that made people fall in love with them in the 1990s. Meandering instrumental noodling is out, and scary, computer-processed vocals are kept to a minimum; it’s not just that real guitars and drums are back, it’s that they sound more exquisite than before — everything, if you will, in its right place. Johnny Greenwood in one ear and Ed O’Brien in the other. Colin Greenwood’s bass holding things together, not hiding behind a fuzz box.

And perhaps the most welcome change: the crystalline sound of Thom Yorke’s voice, not to mention the content of his lyrics. Both are more comprehensible than they have been since OK Computer . Yorke’s wordless falsetto croon reaches its apotheosis on longtime fan favorite “Nude,” and the album’s closer, “Videotape,” now rivals “Street Spirit” and “Motion Picture Soundtrack” as Radiohead’s Sincere Emotional Statement About Death.

This, Radiohead’s most accessible, least technology-damaged release in a decade, can only be downloaded from a glowing plastic box in an office in England somewhere, where it is probably raining and miserable — what I’d have called “Radiohead weather” before this record. But you know, the thing is called In Rainbows for a reason.