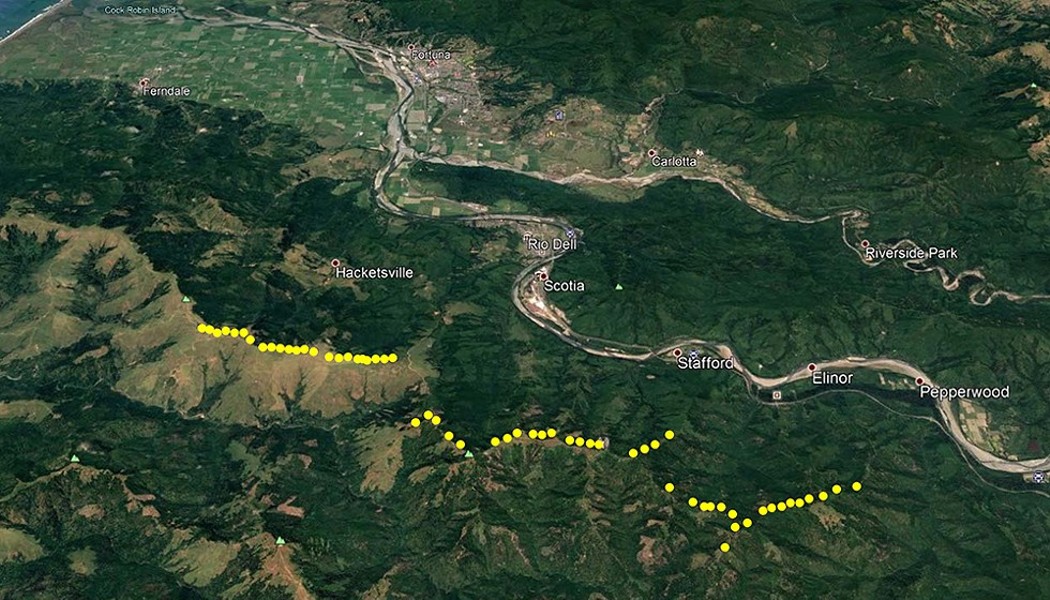 THE DRAFT ENVIRONMENTAL IMPACT REPORT. PHOTOILLUSTRATION BY JONATHAN WEBSTER A satelite image of the proposed project site and an approxiation of where the turbines will be located.

Seven local environmental groups have signed onto a letter to the Humboldt County Planning Department demanding changes to a proposed wind farm project that would place dozens of large turbines on two ridgelines south of Rio Dell.

The letter — signed by some of the North Coast's environmental heavyweights — comes as the the large, San Diego-based renewable energy company Terra-Gen's wind project is in the final throes of the Environmental Impact Report process. Humboldt County Planning Director John Ford said the final report analyzing the impacts of putting dozens of 600-foot-tall wind turbines on Bear River and Monument ridges released in late October or early November. Ford said he anticipates the Humboldt County Planning Commission will consider certifying the EIR and approving a conditional use permit in November.

Proponents of the project, including the Redwood Coast Energy Authority, which is in the process of trying to negotiate the purchase of the majority of the electricity the project would generate, argue that it is an important step toward reducing Humboldt County's carbon footprint in the face of the stark and imminent reality of global climate change. But as the draft environmental impact report notes, the project will undoubtedly have sizeable impacts, perhaps most notably on migratory bird species in the area.

The Sept. 12 letter — signed by the Environmental Protection Information Center, Northcoast Environmental Center, Humboldt 350, Friends of the Eel River, North Coast Chapter of the California Native Plant Society, Redwood Region Audubon and the Redwood Chapter of the Sierra Club — interestingly notes that not all its signatories are unified. Some of the organizations want to kill the project outright, the letter says, while others would support a modified version. But if the proposal moves forward, the letter states the groups "unanimously insist" that four conditions be met.

"Our organizations urge rapid action at the local, state, national and international scale to address our climate crisis," the letter states. "In Humboldt, emissions associated with electricity use account for approximately 13 percent of total county carbon emissions, according to the county's forthcoming Climate Action Plan. We encourage the development of clean energy projects but recognize that wind energy development can have detrimental impacts to the natural environment. In most circumstances, these impacts can be minimized and mitigated to acceptable levels through sound planning, siting and imposition of the best available technology. Here, as acknowledged in your draft environmental impact report, given the largely undeveloped landscape and the presence of at-risk species, the Humboldt Wind Project will have significant impacts to the environment. At present, these have not been minimized or mitigated to an acceptable level."

Specifically, the groups "insist" Terra-Gen not erect turbines on Bear River Ridge, noting that it is home to an "isolated and unique" population of horned larks, sits within a designated "important bird area" and is of great cultural significance to the Wiyot Tribe, which has voiced its opposition to seeing the ridge dotted with massive wind turbines.

The groups also want Terra-Gen to complete all survey protocols before the EIR is complete and incorporate "smart design," which would allow the turbines to stop operation when sensitive species are detected nearby or during "survey-defined high-risk periods." The group is also calling on Terra-Gen to commit to adaptive management, noting that "we can expect significant technological advances throughout the life of the project (30 years)."

"As technology advances, and our ability to reduce impacts and increase efficiency increases, the project should adopt emerging technologies and adapt to changing conditions," the letter states, adding that this could help reduce operational impacts as the project ages.

Finally, the letter notes the project will "require significant ground disturbance" — in addition to the placement of dozens of large, concrete bases for the turbines partially buried underground, the project will require the widening of a number of access roads adjacent to sensitive watersheds — saying that such disturbances are "a known cause of sediment pollution and landslides." Consequently, the group is insisting that all "ground disturbance occur outside the "wet weather period, defined as Oct. 15 to May 15."

In a statement, Terra-Gen's project spokesperson Natalynne DeLapp said the company takes environmental protection seriously and, through the county planning department, is working directly with the state Department of Fish and Wildlife and the U.S. Department of Fish and Wildlife on "scientifically defensible strategies to avoid, minimize and mitigate" the project's environmental impacts.

The draft environmental impact report essentially set a ceiling for the project — stating the maximum number of turbines — and the company is now working with regulators to find a balance under that ceiling that brings impacts to a level deemed acceptable but also produces enough electricity to keep the project viable.

As proposed in the draft report, the project would see as many as 60 turbines erected on the ridges that, once operational, could produce an estimated 155 megawatts of renewable energy annually, enough to continuously power 40,000 homes and supply 36 percent of the county's electricity consumption.

If electricity consumption accounts for 13 percent of the county's carbon emissions, as the environmental groups' letter states, that means the project could potentially result in a 4.7 percent reduction in Humboldt County's carbon footprint, though that number ignores the carbon cost of project construction and operation. Those would include thousands of trips by 90-foot trucks, 17 miles of newly paved access roads, a 25-mile clear cut transmission corridor and more than 2 million pounds of carbon fiber for the turbine blades on the construction side, and the annual use of more than 20,000 gallons of oil on the operational side.

Some slammed the project as a "green washing" from a company (Terra-Gen) that's owned by Energy Capital Partners, a private equity firm with some $19 billion in energy sector holdings that recently announced the acquisition of all Canadian Utilities fossil fuel-based electricty generation assets, which were valued at more than $620 million.

Project proponents, meanwhile, have pointed to its potential economic impact, noting that it is projected to create 300 jobs during construction, followed by 15 permanent ones during operation, and generate $2 million annually in local tax revenue once up and running. But mostly, proponents argue that the environmental impacts of no project are too grave at a time when the sea level is rising, the planet is warming and weather patterns are becoming more extreme. It's time, they say, for Humboldt County to reduce its carbon footprint and also shoulder the impacts its energy use causes.

While most projects can be judged by weighing their impacts against a benign no-build alternative, DeLapp says this one — proposed in the face of a growing global threat — is different.

During an interview with KMUD earlier this year, DeLapp asked, "What is the environmental impact of more of the same?"