What Arcata can learn from Eureka’s public bathrooms 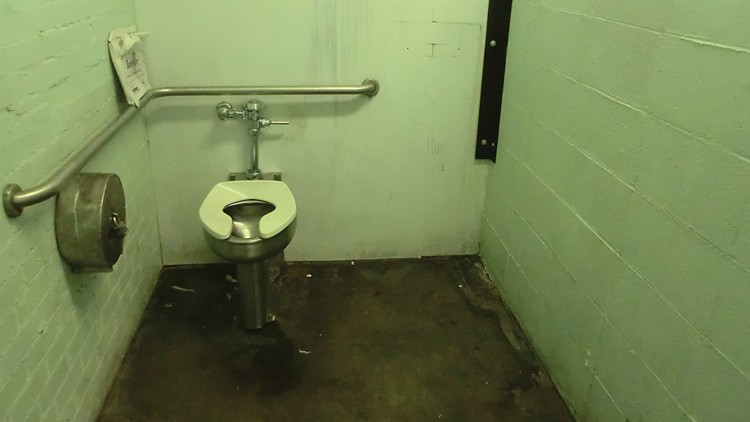 Ever wander the Arcata Plaza and have to go? Really have to get to a bathroom quick? Maybe you high-tailed it to Jacoby's Storehouse and sneaked into its facilities. Or if things were a little less pressing, perhaps you fast-stepped it to the Co-op, got the door code, and maybe waited behind a person or two before finally breathing that sweet sigh of relief. When you gotta go, you gotta go. Trouble is, Arcata doesn't have a public bathroom, and people have argued for years over whether it should. Occupiers renewed that debate in October, and now City Council is considering whether to build public facilities somewhere near downtown.

But public bathrooms pose their own set of challenges, including cleaning, maintenance and vandalism prevention -- as well as a budget to pay for them.

And if the goal, at least partly, is to give the homeless somewhere they can go with dignity, Eureka's experience might offer lessons for Arcata.

Eureka built restrooms in Old Town in 1993, partly in response to merchants who hoped that a public bathroom would reduce the number of non-shoppers seeking relief in their stores.

The City of Eureka's two unisex bathrooms, each with a single toilet, are tucked away behind the northwest corner of the downtown gazebo. Brick on the outside and with bare-bones accommodations inside -- fluorescent lights, lime green cinder block walls, stainless toilets and wash basins -- the bathrooms show signs of hard use. On different days in December, black plastic bags of old clothes were propped against the wall of one toilet, and the other had wads of cardboard in the toilet bowl.

Both bathrooms have custom, protective metal guards over the toilet paper dispensers. One has a stainless steel mirror, and the other lacks anything reflective. Each outside door locks, and homeless folks occasionally lock themselves inside, posing problems for the maintenance man who takes care of the Old Town restrooms.

"Bottom line is everyone goes to the bathroom, and a good functioning bathroom in Old Town is a necessity," says Jonathan Buckmaster, who has maintained the facilities for the past five years. Buckmaster, an HSU graduate -- as well as a clarinet prodigy who performed with L.A. big bands and symphonies throughout his teens - knows the ins and outs of these bathrooms. He opens them each morning around 8:30, returns to clean them at 4 p.m. and closes them at 5 p.m.

Vandalism, he says, is a near-daily occurrence. Sometimes it's as minor as Sharpie marker graffiti. Other times it's incapacitating, as in 2008, when the former, porcelain toilets and sinks were smashed to bits and light fixtures and hand dryers were ripped from the walls. After that, the bathrooms were closed for nearly three months for repairs. And six months ago someone tried to demolish the cinder block partition in one of the bathrooms, putting that one out of commission for a few days.

It costs about $9,500 a year just to clean and keep toilet paper in the two bathrooms in Old Town, according to Jeff Raimey, Eureka's harbor operations supervisor. And that doesn't even touch the cost of major repairs post-vandalism. The city's public restrooms at the Samoa bridge boat launch and marina also endure vandalism and cost about the same to maintain, he said. All are cared for with money from the city's general fund, which is supported by sales and property taxes.

Some merchants say the Old Town restrooms are vital -- or at least, better than nothing. They provide an option for locals and tourists, even if they're not the coziest or the cleanest.

Dorine Leisz, store manager at Many Hands Gallery at the corner of F and Second streets, thinks the bathrooms are embarrassing. "I cringe when I send tourists across the street," says Leisz.

Charlotte McDonald, executive director of Eureka Main Street, also is familiar with the pitfalls of Old Town's restrooms. Knowing what Eureka knows now, she says, it would have helped to build bathrooms with doors that don't lock from the inside, and in a more visible place. "The current location is a place not so easy to monitor. It's out of the way, making vandalism that much easier to undertake."

Some have suggested a full-time, on-site attendant could help. The city claims this is too costly, and really not a viable option for Eureka. That might be different in Arcata, says Laura Cutler, who has been following closely the Arcata public bathroom dilemma since October.

Cutler, a Westhaven resident and former Humboldt County counsel, helped Arcata Occupiers bring the issue to local government officials, reminding the community that those on the lowest socio-economic rungs often "literally do not have a pot to piss in." Cutler's idea? If an on-site attendant would minimize vandalism and help keep facilities clean, then why not make a community service work position in which minor offenders would serve by tending to the bathrooms? "In homeless court people are sentenced with community service," says Cutler. "This could be one way to monitor and maintain the bathrooms at a community level."

The committee has its eye on the space between Arcata City Hall and the Crabs ball field for a potential site, said Ornelas.

So far, though, no date has been set for the council to review the committee's ideas.