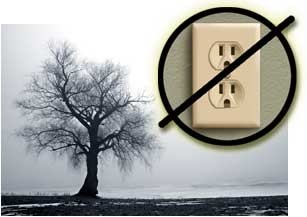 The power in Garberville first went off Tuesday morning, probably around 10 a.m. Within a half hour, the power had been restored. Then, shortly after 11, we lost it again, and this time it was gone for 28 hours. The PG&E hotline was scant on details, stating only that the outage was caused by "winter storm damage." We later learned that the damage took place somewhere between Willits and Laytonville, with the power being cut off to everybody on the grid from Laytonville to Weott.

All the businesses without generator back-up closed up immediately, as did the Jerrold Phelps Medical Clinic and the schools. As is the case with every long-term outage in Southern Humboldt, the ice cream was free at Redway's Shop Smart.

The outage was accompanied by an inordinate amount of snow in the hills, some of which stuck on the highway, causing numerous accidents from Ukiah to Pepperwood, including one fatality. Chain warnings were issued for Hwy 101 from Redwood Valley to just south of Willits, as well as Rattlesnake Summit north of Laytonville. The KMUD news was not aired on Tuesday evening, because Estelle Fennel was snowed in at her home, though she and others were interviewed on the KZYX news, which was simulcast from Mendocino County. Residents were urged to avoid driving if at all possible. As daylight faded away, the hum of household generators rose to fill the air in most of the townships, as the power remained out long after the initial repair time estimate of 5 to 7 p.m. on Tuesday night.

By Wednesday morning, most of the ground in Southern Humboldt was white. Most of the businesses and schools remained closed. Some of the subdivision residents in the hills reported as much as 10 inches of snow overnight. Meanwhile, the clouds gave way to sunshine and a blue sky and kids celebrated their impromptu school holiday with snowball fights. Although PG&E reported by late morning that repairs would not be completed until Thursday morning, the power came back on for most grid-connected residents at about 3:20 p.m., although Phillipsville and Weott were out until 11 p.m. Because PG&E had predicted the power would be off until Thursday morning, school at Southfork High School and Weott Elementary School was canceled for Thursday as well.

By Thursday afternoon almost everything was back to normal, the only remaining signs of the ordeal being patches of white at the tops of the hills. The rain returned and the snow chains advisories were lifted.

*- Eric V. Kirk
Eric V. Kirk is a SoHum attorney and writer; his blog can be found at redwoodreality.blogspot.com.*