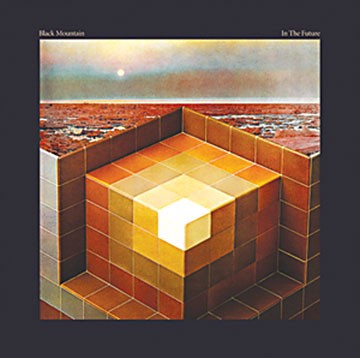 Three years ago Black Mountain's eponymous debut crashed onto the indie scene and immediately captivated both press and fans. Their quick success secured them an opening spot for Coldplay and landed them on the soundtrack for Spider-Man 3. For any band rising to such a level from virtual obscurity, the pressure is high, as the band's next move will certainly be met with great expectation and scrutiny. Black Mountain's foray In the Future may not be indicative of where they are taking listeners, but it is reflective of the band's concentrated foresight as they respond to the pressure.

Admittedly, originality is not Black Mountain's forté, and it's likely not their intention. The band's strength lies within their understanding of mood and tension and its play within the structure of each song and the album as a whole. It's an experiment that has roots in the band's first release and is now further realized and developed. The soulful choruses reaching near Baptist fervor, the striking lulls that speak in equal volume to the voluminous outbursts and the mesmerizing drug-induced rhythms all still remain. What In the Future offers anew is an added complexity and depth that has carried the Black Mountain sound from the raw psychedelic moods of the late '60s to the loftiness of '70s progressive rock. In order to achieve this effect, singer/guitarist Stephen McBean has stepped to the side a bit, allowing other members to command the band's tone and direction.

One of the album's most notable changes comes with the expanded presence of keyboards. It's a move that adds multidimensionality to the songwriting and provides the band with a sound worthy of large arenas. Some songs, "Angels" and "Wucan" in particular, benefit from ethereal touches of the Mellotron, while others, such as "Stormy High," ride the deep lustrous swells of the organ. Even the use of subtle synthesizer passages and the occasional quirky squelch contribute greatly to the crashing and crescendo that makes Into the Futurea powerful endeavor.

What is truly welcome with this release is Amber Webber's increased role as vocalist. And although her contributions were frequent on the band's debut, it isn't until this record that one realizes her undeniable grit. She is not a backup vocalist, as many may have previously thought. She is a co-vocalist in every true sense of the term. This does not mean that McBean's singing duties have fallen to the wayside. His smooth, inspired, and sometimes sleepy delivery is still a dominant force throughout, but Webber is able to display an impressive range that matches his passion and ultimately becomes the album's defining element. She delivers a harrowing and sinister performance on "Queens Will Play" that chills the spine, as she chants "Blood crawls across the cancer/ Blood sprawls across the shore/ Blood crawls up and hassles/ Blood sprawls across the walls."

In the Future is highlighted by the 17-minute epic "Bright Lights," a track Jagjaguwar's press release brags "gives Pink Floyd's 'Echoes' a run for its money." Honestly, it is a tremendous song that certainly challenges Black Mountain's contemporaries, but I'm not sure this comparison has any trans-historical validity. The analogy ignores and diminishes the significance of Floyd's accomplishment, a feat much more monumental in 1971 than it is in 2008. And while the song does indeed have its Floydian qualities, to reduce Black Mountain's effort to such fleeting moments is to sell them short on their own talents. Which, when measured by most standards, surpass the expectations anyone could've had for this sophomore release.